We are in the season of Eclipses. We had a Penumbral Lunar Eclipse on April 25, 2013 and we are about to have an Annular Solar Eclipse on  09/10 th May 2013.
My personal take is that our understanding of Eclipses  vis a vis the market moves is a little sketchy. Either we expect the market to show an immediate reaction or we think that the reaction will come when planets transit the eclipse point later in the year.
I have done a small compilation of the Solar Eclipses for the period 2003-2013 and how Nifty had reacted pre and post the event. In some of the cases I have given some more details to aid our understanding: 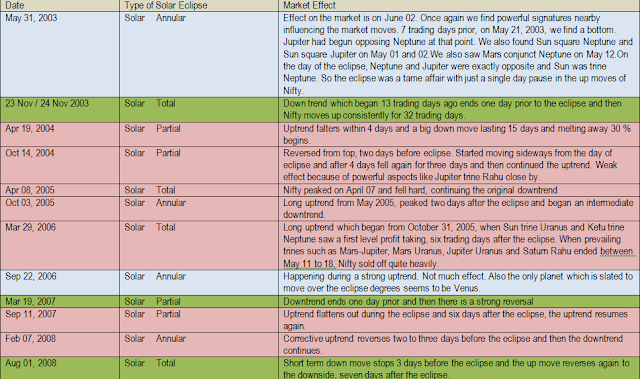 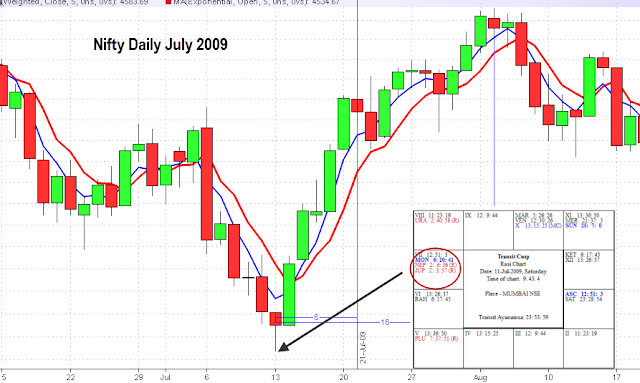 So what do we infer?
1. Eclipses serve as interruptions to the ongoing trend in the market.
2. They may be witnesses for Nifty going up or coming down.In 11 out of 22 instances we saw the market going down and in 7 instances Nifty had improved.In 20% of the cases the effect was not of significance.
3. We see that if the market is in a powerful uptrend or downtrend, caused by aspects and signatures of long range slow moving planets, the eclipse effects were not very noticeable.In other words, reversal effects manifest better when we are in time periods where strong long range planetary forces  are not having any effect.
We have several engagement of fast moving planets such as Venus, Mars, Sun, Mercury with Saturn, but at the moment there aren`t any major aspects between the slow moving planets such as Jupiter,Saturn, Uranus, Neptune and Pluto.In the third week, we have Uranus square Pluto- I do not think this eclipse will show any effect of this manifestation.

So how are we placed for May 09/ 10?
Lunations on April 29/ 30 had produced declines which were intraday.We have the Latitude effect coming on May 03rd. Several of the aspects in the recent past and the ones happening right on ( I had covered this in the blog post captioned as Astro Technicals April 29 to May 16th) have a critical time zone of May 08- 13th. Dasa wise, we will be in Venus Antara- Mars Sookshma.
Astrologically chances of a decline in the week beginning with May 06 are brighter.
However, let us only trade once the market moves as per our expectations.
Posted by Tekkiesuresh at 11:16:00 PM