Saturn and Jupiter....Masters of Our Universe Our essence has not changed over the eons and so we have collectively given birth to cycles..One of them is visiting us after 147 years...Saturn in Sagittarius and Scorpio..
( When all of us were experiencing a different life time in a different body! )Saturn moved out of Sagittarius on December 30, 1872. 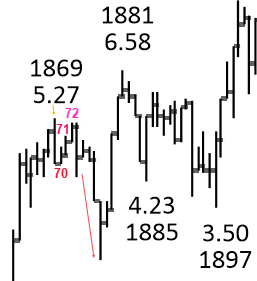 We find that from an 1870 low ( it happened after January 01, obviously ) markets moved up in 1870, fell to a low in 1871 but continued higher into 1872.
2017 resonates with 1870. We saw the significant low developing in December 2016. And the market rise and rise into 2017.Currently the rhyming correction of 1870 seems to be onIn other words we are just experiencing a correction inside the uptrend.We may expect a rise once again after the correction to another all time high.Does Jupiter agree with Saturn?Let us find out!

In 2017, Jupiter enters Libra on September 12, 2017 and remains there till October 11, 2018.We are in August 2017 and so are concerned about the entry of Jupiter into Libra.We find either just before entry into Libra or after entering Libra, an important low is formed by markets. Then there is a spectacular rise.So the lows of Saturn and Jupiter are converging.Which means the Masters are in Agreement.What should we do?Use the lows to get into the markets for continuation of the Bull trend. What else?Use stop losses for shorts, always keeping an eye on whiplashes
Posted by Tekkiesuresh at 3:45:00 PM 1 comment: