We have a very interesting phenomena coming up next month.
Jupiter in Leo squares Saturn in Scorpio on July 31 to August 08, 2015.
In between Saturn turns Direct on August 03, 2015.
Two powerful astro aspects  coming together in the same time band!
Let us see what had happened in the past..
For that I have taken two instances when Saturn was in Scorpio and Jupiter was in Leo.
The years 1896 and 1956.. 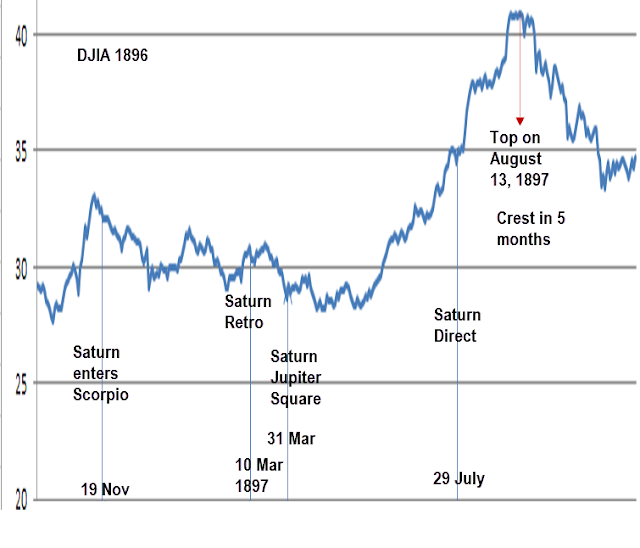 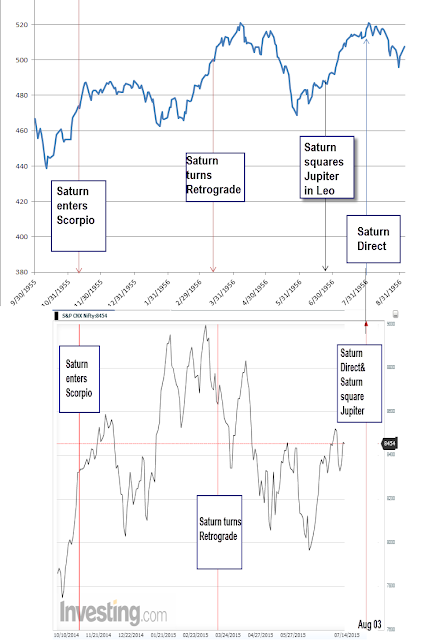 In 1897 March 10,Saturn becomes retrograde in Scorpio and by March 31, 1897, just 21 days after, Saturn squares Jupiter in Leo.Soon there was an important trough and then a race to the top, on August 13, 1897.Crest was formed in 5 months from the time of the square formation.

Once again very close to the date of square formation between Scorpio Saturn and Leo Jupiter on June 18, 1956, we see a an important trough and then a rise to Saturn Direct station of July 31.Ensuing top gave birth to an important trough in 8 months.

Saturn turns direct on August 03 which is also the time band for the all important Saturn Jupiter square. So we may expect a big uptrend to unfold, which should propel prices out of the down trend till the third week of August when Sun conjuncts with Jupiter and Venus retro trines with Uranus.
Of course we trade only when price confirms the direction..