Sun Uranus conjunction was on March 25, 2012. So today the market may exhibit initial bullishness.Moon is in Taurus emerging out of a conjunction with Jupiter and moving towards Venus, all three in Taurus.So this should be an overall positive day, maybe not overly positive because of several negative overhangs which we will see now.
By 11.09 am Sun is in-conjunct with Mars ( a negative development.)
By 11.32 am, Moon reaches its Apogee, that is its farthest position from the Earth.( a potentially reversal sign)
By 11.39 am, Mercury becomes in-conjunct with Saturn ( another negative development.
So by around 12 to 12.15 pm, Nifty may reverse its upward movement
At 13.01.34 pm, Moon becomes trine with the Ascendant. So will this stop the downward movement?
By 3.30 pm, the developing Sun Rahu trine becomes closer ( it will become tomorrow early morning). So maybe the market will close positively today.

Sun will be trine with Rahu when the market opens.  Moon also is emerging out of a conjunction with Venus.Mercury applies to Moon in a sextile aspect ( positive development), which will end by 10.05 am.
So we may expect an up move till about 11.23 am., with gradual weakening or tossing around from 10 15 am to 11.23 am.

After 10.05 am, Moon also starts going into her void.She remains in that condition for rest of the trading day.All positive long range trines have started separating. Mars-Pluto, Jupiter-Pluto,and Saturn -Neptune, all begin to lose their positive bias.By 3.30 pm Sun Rahu trinal effect also would wane off.So the market could weaken after 11.23 am and end the day negative.


Moon moves into volatile Gemini and squares Mars first thing.Not a very auspicious beginning! By 9.19 am, Moon`s true Nodes begin to reverse and start direct motion.Not natural for them because the Nodes are supposed to move in a retrograde fashion.In that condition they ae conjunct Moon. Again a negative development.( This will also weaken the developing Rahu Uranus trine temporarily.)
Nifty may open lower.
Meanwhile Sun is approaching its square station with Pluto.In fact Pluto which rules huge debts is in loggerheads with several celestial friends.
I suspect Nifty will  open and close lower this day.


March Series settlement day.
Moon reaches a high Northern declination and reverses direction. There may be attempts for positive moves, but with Pluto Sun square nearby, it looks like the markets will close lower again.

Moon continues to form a square with Uranus- market could open a little lower.After 2 pm, we may expect a mild recovery, because Moon is getting sextile to Mars. For the week it looks like Nifty prefers to go down to its previous supports.

Please use your technical levels as advised by your consultants and advisers to enter and exit the markets. This is an educational and learning attempt to understand the celestial correlation of the markets.
Have a great week.. 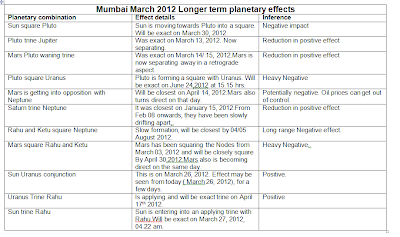 Here is a tabulation of slow moving planets and their immediate effects on the markets.
Posted by Tekkiesuresh at 3:51:00 AM No comments:

Monthly momentum is slowing. Weekly downtrend is continuing, albeit slowly.Daily seems to be emerging from sudden weakness.....
Posted by Tekkiesuresh at 3:03:00 AM No comments: 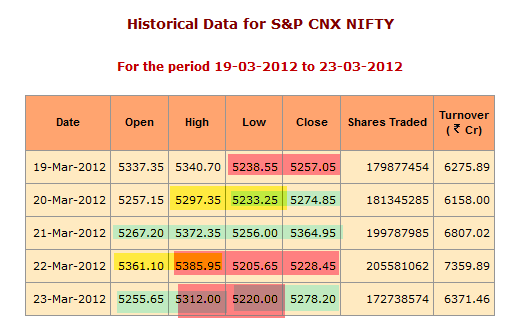 I had expected a bit more overall bullishness but evidently the conjunction between Moon and Retrograde Mercury had more lessons for me! It was a huge down day.( March 22, 2012)

In fact since then I had got into detailed analysis mode and have understood several lunar principles which govern the market. There is tremendous wisdom in the words of W.D.Gann- the fast moving planets are the key. With Mercury ruling 17% of the Nifty Index component industries (Software and telecom) little wonder then that Mercury influences Nifty pretty strongly. I have here a detailed graph which brings out an observation that multiple lunar events are necessary to bring in timing into the market.
The other posts are about my technical take on Nifty and the coming week from an astro perspective.
Posted by Tekkiesuresh at 2:40:00 AM No comments:

This should be an interesting week with a New Moon in Aries acting as a pivotal point. Will the Nifty go down first and then rally towards 5630 to form a double top? Let us see what astro technicals has to offer:
Posted by Tekkiesuresh at 5:11:00 PM 3 comments:

A rap on my Knuckles!

A pre 1992 budget, full of taxation and marginal sops took the wind out of the bulls. And for me it was a demonstration of the power of the Nodes ( Rahu and Ketu) along with Mars ( R) and what they could do to the markets. 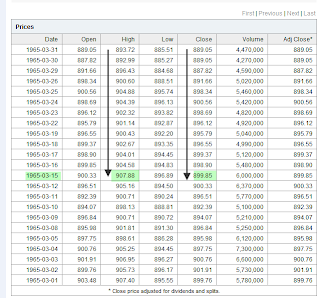 I have shown a chart of the 1965 March sky and a comparison with the present celestial position. Even though our BSE traces its history to the 1950s, we have documented index values only from 1979. And so I have gone to Dow Jones Industrial Averages.I could not get a graphical representation of 1965 March price movements but I have managed a tabulation of numerical values. You can see how the Dow peaked on March 15, 1965 and gradually went down. This despite some powerful signature formations!
Posted by Tekkiesuresh at 5:02:00 PM No comments:

At 11 am on March 16, 2012, at New Delhi,Ascendant is at 05:12:04 of Gemini. Mercury is the sign lord, Mars is the star lord, Sun is the sub lord and Jupiter is the sub sub lord. Mars is India`s 7th lord as well as a lord who specifies lagna or ascendant. This stands for a great initiative to push things forward, yet subjected to diktats from other partners. Since Transit Mars is retrograde and square both the nodes, we could expect trouble from the opposition which will reach a zenith by March 20 or 21 and thereafter wane.
Since the Ascendant at the time of the budget is conjunct both Mars and Uranus some very unexpected positivwe announcements may be in the pipeline.Since transitting Moon is conjunct pluto, this could be a reformatory step towards bringing down the external debt or something to do with taxes. Moon is in trine with Venus and Jupiter in Aries and with Mars ( R) in Leo. So the markets could suddenly rise during the budget session. This is expected to be a positive day for the markets.

Nifty futures  more or less moved on expected lines on March 13, 2012. See the astro chart for  expectations on March 14, 2012.Of course these are experimental observations and so do take care what you do with your money please! Consult your financial counselor before investing or trading.
Posted by Tekkiesuresh at 10:36:00 PM No comments: 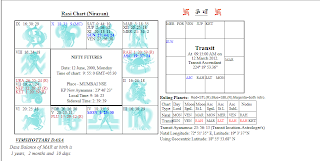 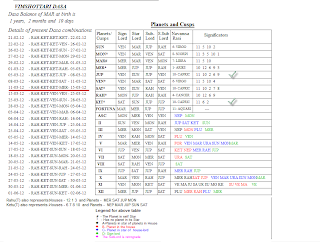 Here are the permanent charts of Nifty Futures and its significators. Interestingly, Ketu and Jupiter come across as great benefics, while Saturn is a depressant.These charts are courtesy of KP Star one software.
Posted by Tekkiesuresh at 1:09:00 AM No comments:

This chart explains the basic method I use for trading.It is a mechanical cross over of MAs with a couple of technical indicators. Supports, Resistances and Elliott Wave Projections give some targets to look for. And it is in this probabilistic area that we look for some Astro directions.
Posted by Tekkiesuresh at 12:11:00 AM No comments:

While there are several Astro systems across the world, the ones I prefer to use are India`s KP ( Krishnamurti Paddathi) System and the western zero Ayanamsa system. Any particular reason? My experience simply happens to be only in these two systems, that`s why!
Time and again I will refer to the natal chart of Nifty Futures and not Nifty, because Iam unsure of the exact date of first trade of Nifty.Rest rules shall come as we go along.Iam a practical guy and so Iam not much inclined towards esoteric or spiritual angles of Astrology.While Iam aware of such existences and I respect them, this blog will confine to mostly "use of Astro tools in trading", our primary motive being to make money through Astro Trading.
Posted by Tekkiesuresh at 11:44:00 PM No comments:

My two penny worth!

Welcome to Astro Technicals! This blog is about Financial Astrology- the effect of celestial bodies on the stock market. Being an Indian Trader and as one who operates predominantly in the National Stock Exchange of India, it is the S&P CNX Nifty which engages me most.My endeavor will be to combine Technical Analysis with Financial Astrology and see whether FA at least offers the benefit of a leading indicator. I welcome all like minded individuals to comment and offer feedback on the subject and my views expressed here.
Posted by Tekkiesuresh at 11:05:00 PM No comments: