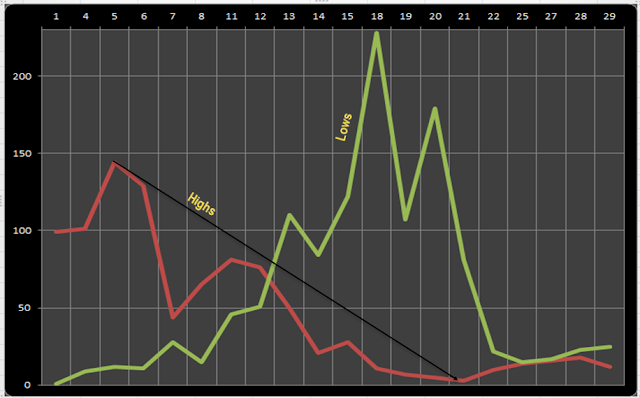 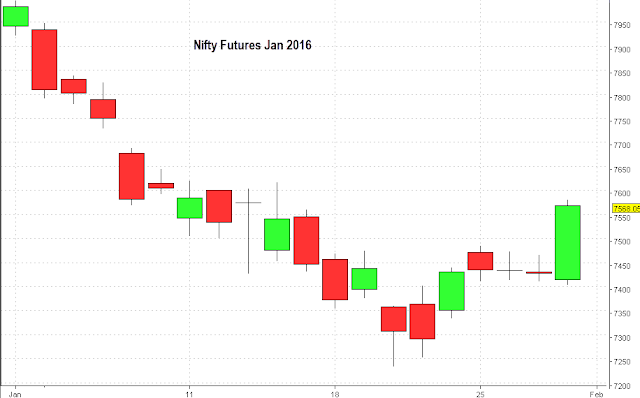 This is a chart of 52 week high lows every day, of all stocks traded in NSE in the month of January 2016..Chart on top is  Nifty Futures Chart for the same period.
This shows the internal strength of the market as a whole.
We see that when number of stocks hitting 52 week highs keep coming down, Nifty also goes down.
Also the green line represents the number of stocks hitting low and as the market comes down, this number shoots up.On January 18, the number of stocks hitting 52 week low was 228 and within two days the market formed a bottom.
When 52 week high numbers are rising, money flows into the market and when 52 week lows are rising money flows out of the market.
For the market to begin a consistent bull run, 52 week high numbers must stay consistently above 50 at least.
Right now we are at a truce situation. The internals are yet to show improvement. So we need to be cautious of the market rise.
To know more on Nifty analysis using astro and other techniques, please join our paid subscription. Send a mail to tekkiesuresh@gmail.com  for more details.
Posted by Tekkiesuresh at 11:39:00 PM No comments:

Area of Next resistance 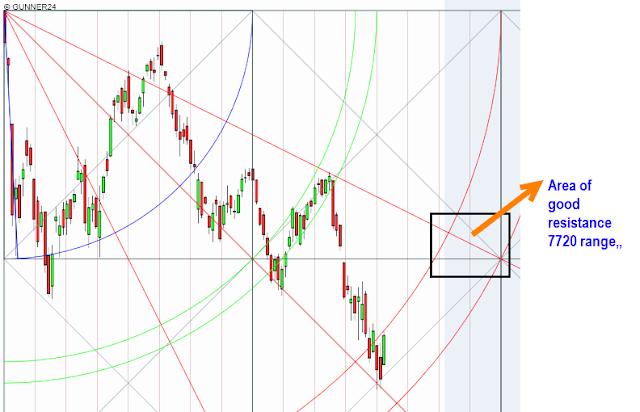 It is all cyclical 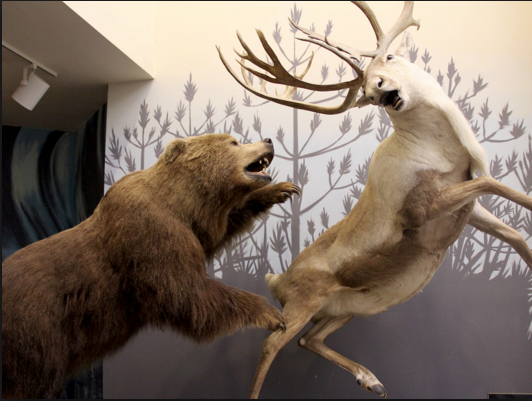 The Bear is not done yet....
As we can see the Fear levels which we had seen in August 2015 have not yet manifested..The Bear has to bring out such fear and cause capitulation to complete the bear market.
As it is always said, Bull markets climb a wall of worry and Bear markets descend a slope of hope.
Every upward retracement must kindle hope, every subsequent down turn must crush it and one big fall should make most investors and traders to give up and sell everything. This phenomenon is called capitulation.
This has not happened yet. When it does this bear phase will be over.
VIX indicates that there is still a fair bit of complacency left. 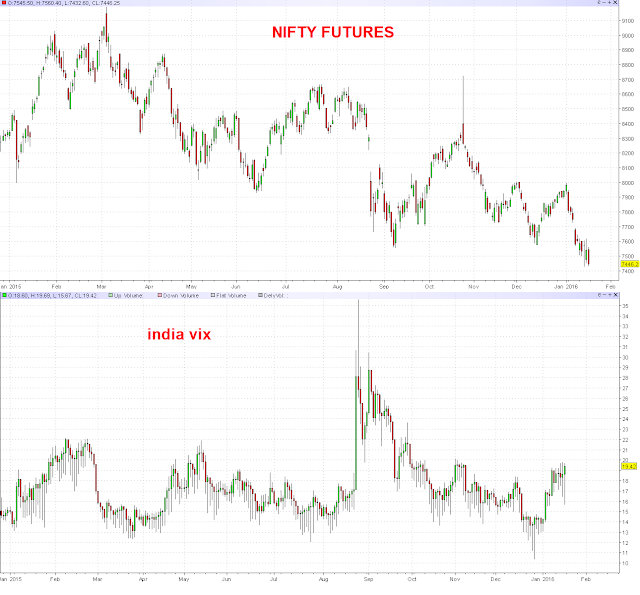 But the end is quite close. Astro has been indicating it.
Let us see what the cycles have to say.
According to Kress Cycles, this year`s market movements will have an echo from the markets, 6,10 30,60 and 120 years ago. Let us ignore all those very old cycles and look at the recent ones, 6 and 10 year cycles. 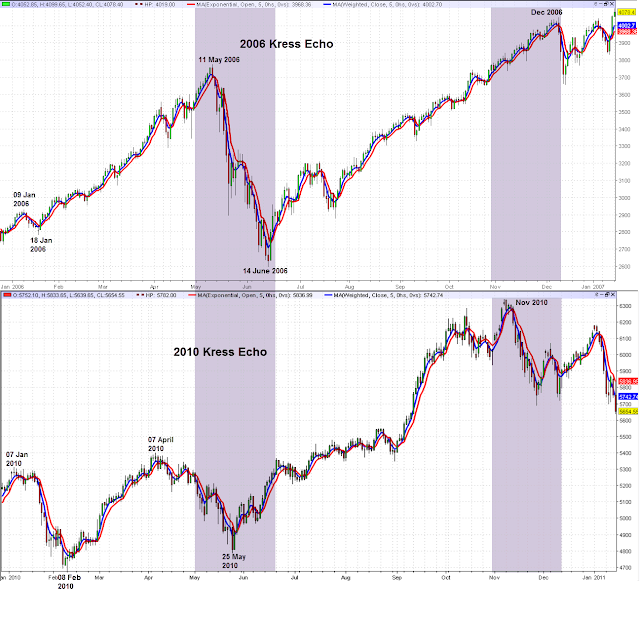 We see, according to the echo of the past, market should bottom out in a week or two and then begin a rise into April/ May 2016. Note that they may not be exact replicas but some similarities could be there.
That the current bear market does not end now, but only in April 2016 is a possibility.
Does Astro correlate this?
Yes!
To know more subscribe to our services. Send a mail to tekkiesuresh@gmail.com
Posted by Tekkiesuresh at 9:21:00 PM No comments:

On January 09, Rahu moves to Leo and Ketu to Aquarius..
How were the past experiences of such moves? 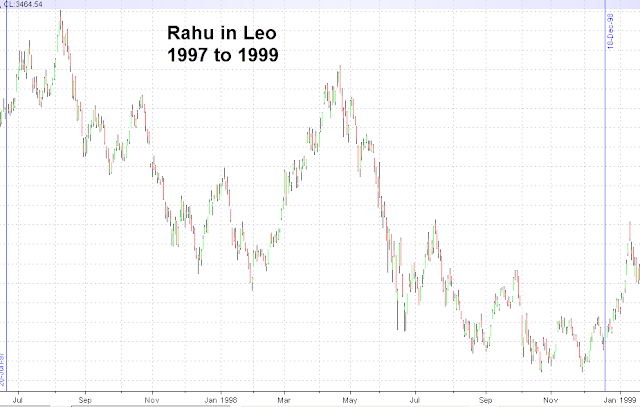 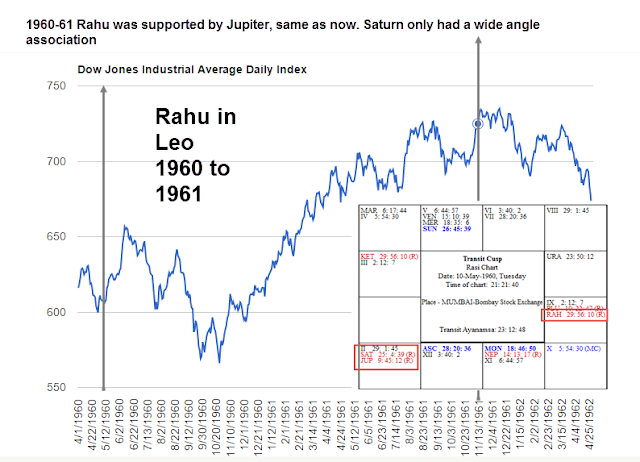 We see Rahu being supported by trine aspects from Jupiter and Saturn.From a double bottom market moves up. 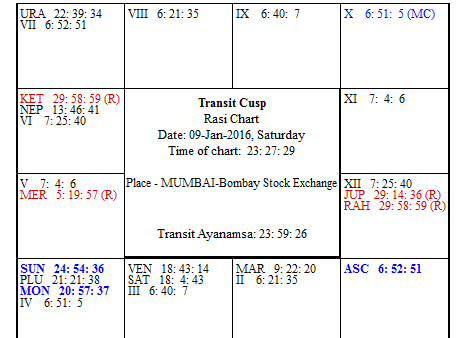 Three important time zones when Rahu is in Leo: 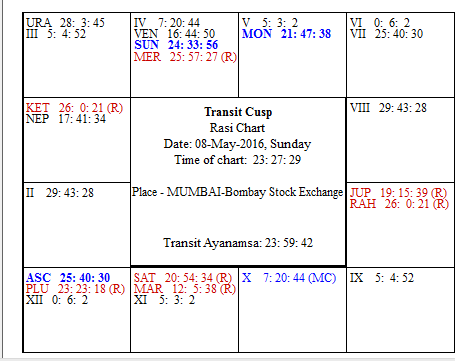 When Rahu enters Venus star,we see an important Square between Saturn and Jupiter.Several planets in the degree orb of 20 to23 degrees, 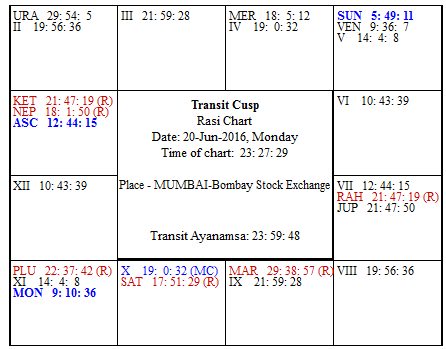 Here we see Rahu conjunct Jupiter and trine Pluto..Several long term planets are getting into formation. 2016 will be hugely volatile. 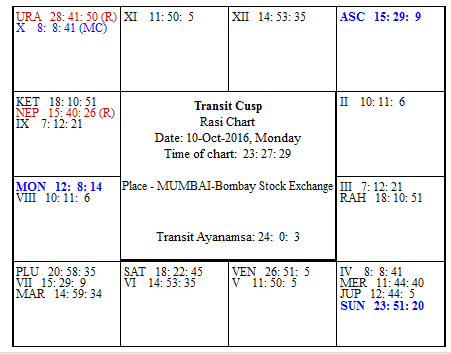 Here we see Saturn closely aspecting Rahu.
So first half of the year is expected to be better than 2015 and second half, worse than 2015.
For detailed analysis and for trading levels, please subscribe to our paid subscription service. You may send a mail to tekkiesuresh@c gmail.com for more details and clarifications.
Posted by Tekkiesuresh at 12:20:00 AM No comments: