Let us begin with a recap of our observations for the week, September 14 to 18, 2015.
"We continue to move through tight astro formations this week as well.
Two main quick planets move houses this week..Mars into Leo and Sun into Virgo.Most importantly Jupiter gets into opposition with Neptune..this is an expectation loss or disillusionment kind of signature.
On top of it, Saturn gets into a trine with  Ketu and sextile with Rahu.
Being in Saturn star, Ketu is totally controlled by Saturn and then this trine allows smooth energy flow between Ketu and Saturn.
Then the Nodes are highlighted again because of the Partial Solar Eclipse.By the weekend we come to yet another Mercury Retrograde
The financial markets are  going to rock and roll with some explosive moves. First of all, the eclipses happening in  Leo and Virgo  indicate that several Government and Central Banks will be in a  chaotic and misaligned state.Just one Chinese Government and their pronouncement of yuan devaluation caused so much havoc. The world is changing on so many levels – leadership, economy and technology. But one thing for sure is that the world is global; now we are all one. We are all having an effect on each other.
Mars changes signs to unite with Jupiter aspecting Saturn, major events really heat up. Leo pertains to leaders. Sun as the sign lord of Leo is the dispositor, So Sun`s movement will  direct the energy of Mars conjunct Jupiter and square Saturn.
Beginnings are laid this week when Jupiter opposes Neptune..
As the Sun unites with Rahu (September 24) we may expect some major events..
Astro wise markets could decline this week into the weekend of Sept 18th. If the market does not decline then it will form a crest and decline by Sept 23.
In any case, bearishness is not yet over. Watch the pivots and emas and trade profitably.Volatility will continue to be very high. It is a great time to trade, but trade safely!"

The major event in the last week was the decision of US FED not to increase rates and continue with the zero interest rates for some more time. This is an astounding decision in many ways. For the first time the FED seems to weigh the effects of international developments more than domestic developments. FED had a compulsion to increase rates because several pension and state funds are facing bankruptcy.On the other hand many emerging markets are getting into trouble, because they have borrowed excessively in dollars, but commodities have collapsed and any more increase in dollar rates will screw them.In other words the FED is between the devil and the deep sea. This is typical of the confusion which only a Neptune opposition of Jupiter can bring about.
This once again proves the point that all markets are connected and so astro analysis must follow global astro formations, which are nothing but the aspects, the celestial bodies make to one another. Sovereign debts forced by Uranus Pluto square between 2010 and 2014 will continue to unfold as all planets first connect with Uranus and then connect with Pluto.The climax will be when the Great Disciplinarian, Saturn connects with Pluto in a conjunction on January 08, 2020, when Pluto, Saturn,Sun,Mercury,Ketu and Jupiter will all be in Sagittarius. Sagittarius is a sign of exaggeration and we can expect total panic in all markets at that juncture. This will be needed for the final clearance of all mess for the Greatest Bull Market of all times to be born.
Coming back to the present...
So Mars has moved into Leo.
Sun has moved into Virgo.
Sun will shortly conjunct Rahu.
Mars is moving towards Jupiter conjunction.
Mars will square Saturn before it conjuncts with Jupiter.
Saturn is about to start its trine with Ketu and sextile with Rahu.
Let us first examine this Jupiter Mars movement in Leo with some historical perspective...
We look at two time periods of the past...1944-45 and 1979 80, when Jupiter and Mars were moving in Leo.. 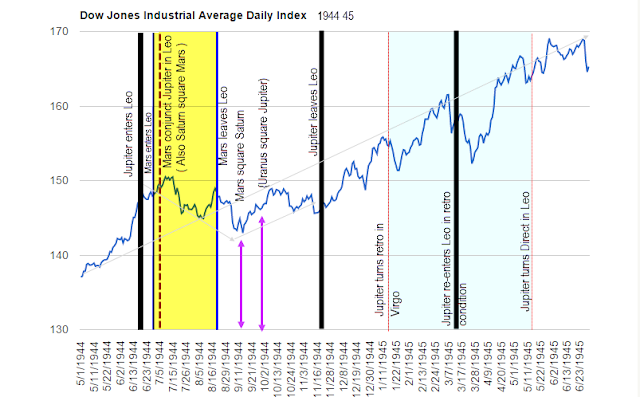 Thick black lines indicate movement of Jupiter into Leo.
Blue lines are of Mars in Leo.
Red dotted lines depict Jupiter becoming retro and direct.
Purple two way arrows indicate other powerful astro formations in the periods under discussion,
We find here that Jupiter and Mars entered Leo in quick succession and formed a conjunction which was a high point for Dow.That also was the point of Saturn squaring Neptune and so things were brought to the ground pretty fast! Dow declined till Mars squared Saturn. When Uranus squared Jupiter, Dow declined once again and by the time Jupiter left Leo ( without becoming retrograde) Dow was more or less in the same position as when Jupiter entered Leo.Mars helped in the formation of a top, a bottom and a secondary lower top before moving out of Leo.
This was an unusual year when Jupiter did not become retrograde in Leo at all, but became retrograde pretty quickly in Virgo.Jupiter re-entered Leo again in retrograde motion and caused a market fall. Dow thereafter rose into the direct formation and continued its rise when Jupiter left Leo for the second time in the period 1944 45.
Next period under consideration is 1979-80 when both Mars and Jupiter were in Leo. That was historically an important time for Indian Stock Markets, because BSE became India`s official exchange then. 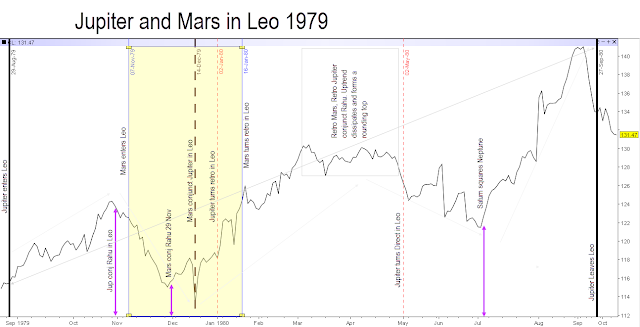 Jupiter enters Leo and Sensex moved up till Jupiter met Rahu. When the market was declining Mars enters Leo and the decline temporarily stops when Mars meets Rahu,A lower bottom is formed when Mars meets Jupiter, Soon Jupiter goes retro  and then a big bull move begins.It continues till retro Mars and retro Jupiter meet Rahu once again in Leo.This dissipates the bull move and when Jupiter becomes direct, Sensex declines till Saturn squares Neptune. After that another bull move begins which ends close to when Jupiter leaves Leo for good.
Now, to 2015..

Jupiter enters Leo on July 14th. Within 7 trading days, markets form a top and start declining. They decline heavily when Jupiter moves through Ketu star, a Ketu who is heavily influenced by Saturn.
And now Mars enters Leo on September 16. Markets have been rising from a 7 September bottom when Mars enters Leo.We may now expect a top formation to coincide with the Mercury retrograde in action right now till a bottom around October 19, when Mars conjuncts Jupiter. This generally is a bullish formation and so we expect the markets to rise, post October 19th.
This may continue till Mars leaves Leo and we may see a further decline into Mars Rahu conjunction. However with past form we may expect this conjunction to form a higher bottom.
Will we then see a sideways movement till Saturn Neptune square? After that a big bull move may unfold.
After all Jupiter has to take the markets to much higher levels as long as he is in Leo!
I have also marked the red circles where we expect a bottoming around November 09. These formations seem to agree don`t they?
Let us also look at another astro system, where the Sun is in the centre and all planets move around, just like it is overhead. Here there are no Nodes, that is no Rahu and Ketu. From Sun`s point of view. Mercury will move faster than the Moon here. No planets will be retrograde and Sun is stationary at zero degree  Aries. 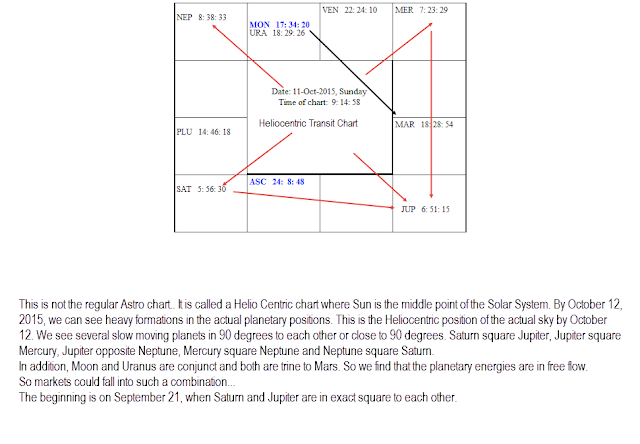 So many planets in geometric formations! Looks frightening isn`t it? This date is also close to October 19, explained earlier.
Beginning is on September 21...Here is the Helio chart for Monday... 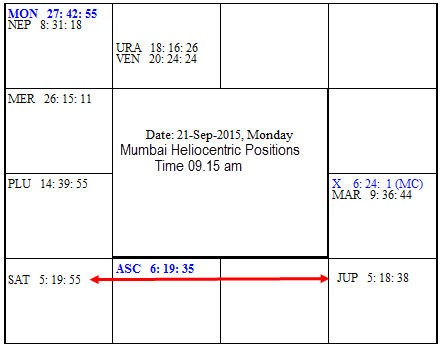 Jupiter is exactly square to Saturn...
Here are the regular charts this week... 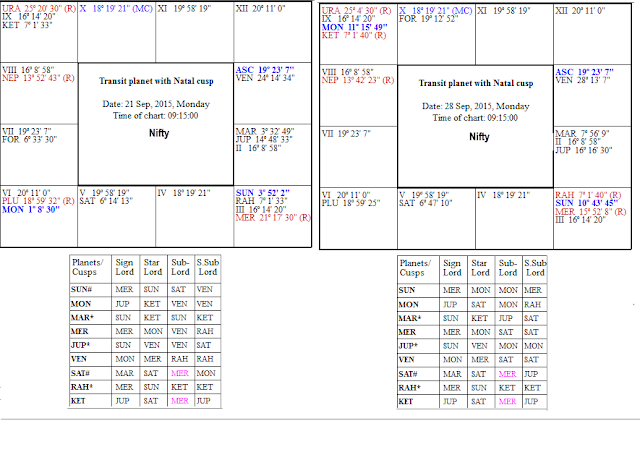 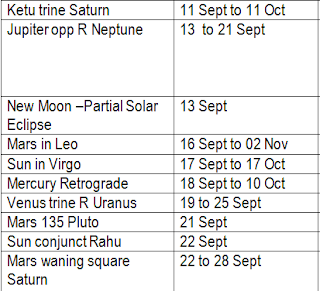 We find Jupiter has moved on to Venus star, which is a relief for Bulls. But both Saturn and Ketu continue to be in Saturn star and Mercury Sub. A Mercury which is in own sign Virgo, but unfortunately Retrograde.An immediate aspect would be the Sun Rahu conjunction coming  up on September 22, 2015.
Let us see how markets reacted to Sun Rahu conjunctions in the past... 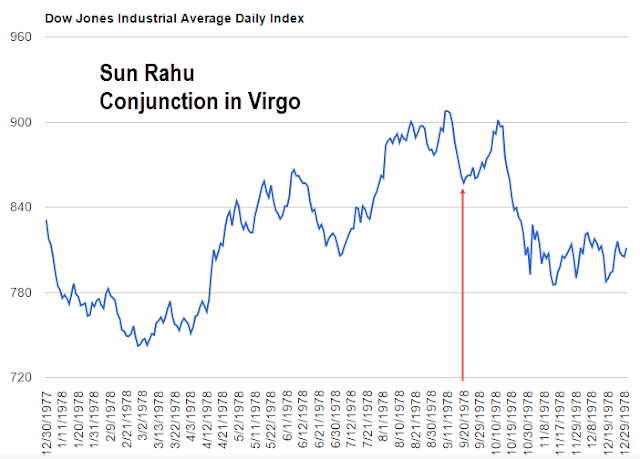 Venus trine Uranus currently on could assist a down move. Sun Rahu conjunction may cause a bottom and reversal upwards. So heavy volatility is expected.
Pluto direct station is made more powerful by the Mercury aspect.
I conclude with the same sentences used last week...
"In any case, bearishness is not yet over. Watch the pivots and emas and trade profitably.Volatility will continue to be very high. It is a great time to trade, but trade safely!"
Here is a correlation with Neo waves.. 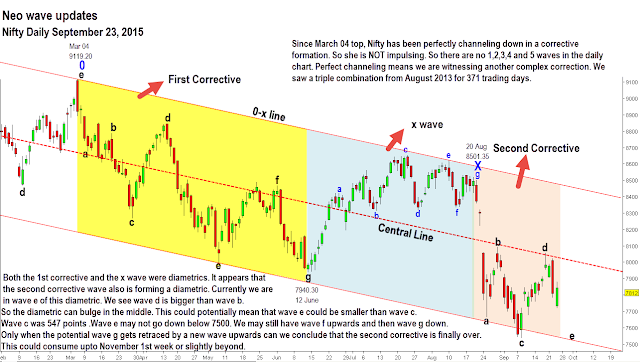 Wish to receive such meticulously researched analysis reports on a regular basis?
Just send me a mail to tekkiesuresh@ gmail.com. I shall send you the subscription details..At less than Rs 40/- per day, such details could all be yours!
Posted by Tekkiesuresh at 10:43:00 AM 3 comments: