Let us start from where we left last time. In Nov post, we had concluded,
"Expect a run up to the date when Jupiter exits Leo.Major correction after that. Right now Uranus retro and Pluto are approaching each other which is bullish".
The chart shown above has been updated up to December 24, 2015.
Date when Jupiter exits Leo is August 11, 2016. So expecting a run up to this date is actually a medium term projection and this is valid right now.
Uranus and Pluto square is close from December 18 2015 to March 19 2016.Their mid date is February 02, 2016. So the short term expectation is that we may see a rise up to February 02.
Other aspects and factors which  correlate market moves are reserved only for paid subscribers.
Just send a mail to tekkiesuresh@gmail.com and we will assist you to become a paid subscriber.
Let us examine Jupiter in Leo stations, especially the retro and direct stations more fully and arrive at an expectation for 2016... 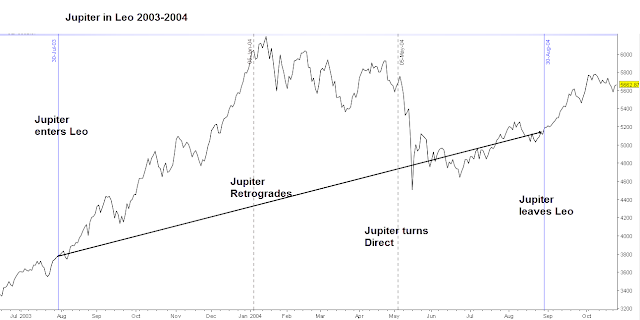 2003-04 is a fascinating astro contrast. Market reverses direction once again during the retrograde.Soon after turning direct, it reverses once again and continues its upward march.

In 2015, markets fell when Jupiter entered Leo. They have been continuously falling. Jupiter becomes retrograde on January 08th.So by past form, can we expect a reversal during this period? If so we are looking at markets to further improve.If so Nifty and Sensex could rise up in the channel shown above and surpass the all time high of 9119.
So astrologically bullish times are round the corner.
Happy New Year! .
Posted by Tekkiesuresh at 5:24:00 PM 2 comments: