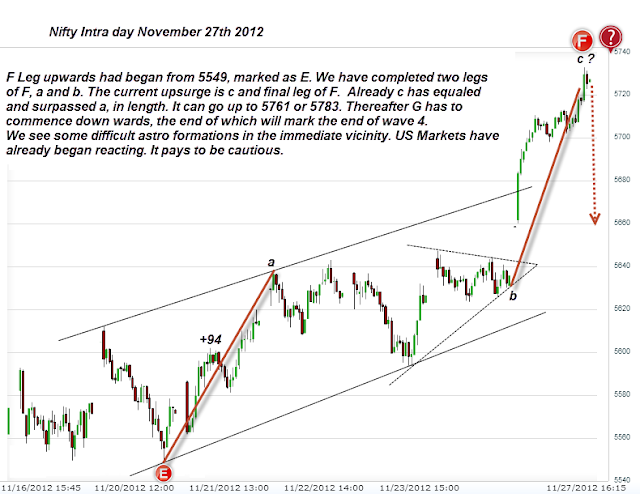 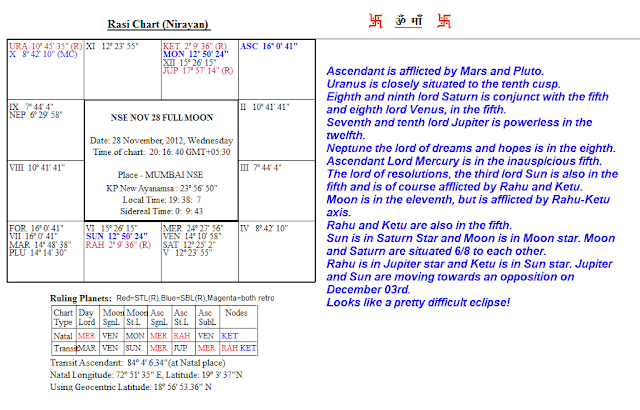 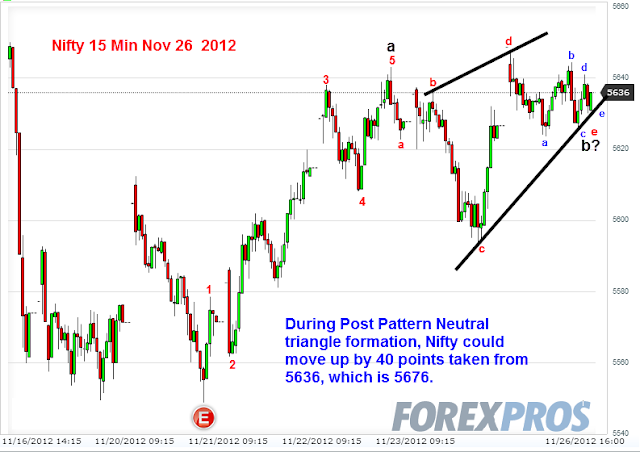 We have probably completed Wave E of Diametric ABCDEFG as part of 4th wave progress in Nifty.It also appears that a and b sub waves of F are also completed and we now expect an immediate leg up of wave c of F.As wave 4 of Wave C of larger Diametric D has so far consumed 33 days both wave F and wave G are likely to hurry to complete the rather tiresome wave 4. 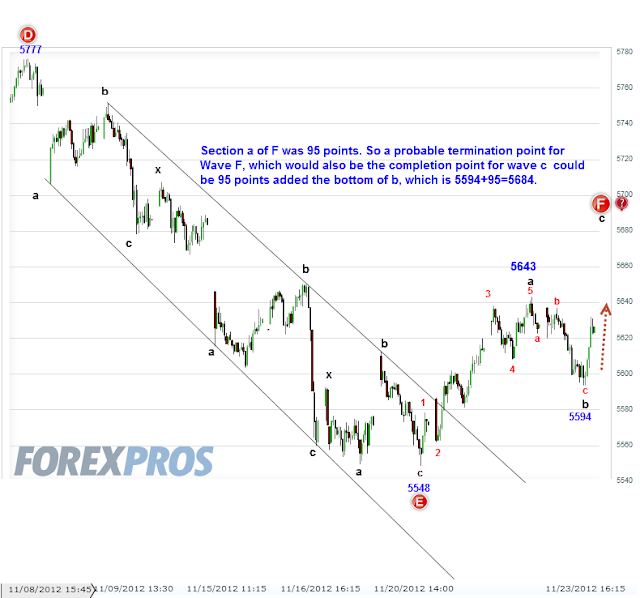 We are at  quite an inflexion point with respect to Nifty.On the one hand we have several global factors which look shaky. Our domestic economy is not doing too well either.On the other hand we have quite a lot of liquidity sloshing around which is keeping the Indices from correcting heavily. Let us look at some Fibo levels and Gann angles to see whether we can get some understanding... 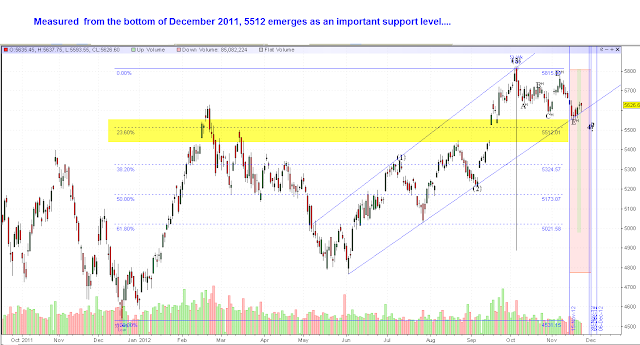 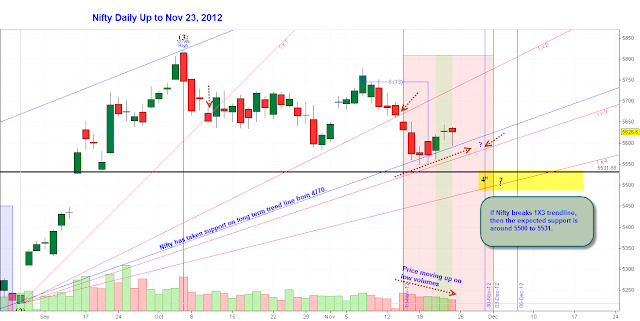 Seeing all three charts together,the Fibo and Gann supports seem to be at 5500 to 5530 range, with 5512-5515 being specifically important.

Now for the Resistances....

As per the two charts above, we are seeing a seeming resistance level around 5690. As per Gann`s time and price squaring technique, the resistance for a 180 degree addition of the 5548 low  comes to 5698.So this could be the possible  immediate upside.
Let us hope Nifty agrees with us on these projections this week!
Posted by Tekkiesuresh at 8:01:00 PM No comments: 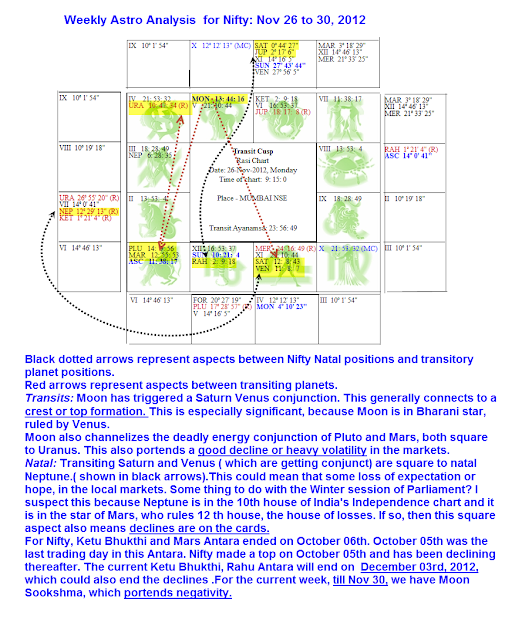 The declinations also point out to a probable   reversal from November 29 onwards.November 28, being Guru Nanak Jayanthi and a holiday, has reduced the possibility of markets being open when positive Sun was ruling.November 29th, is a day ruled by negative Moon. Rahu and Ketu which are direct from November 21, onwards, will get back to their customary retrograde motions from November 27th onwards.This is also another sign of reversal.Since Moon is in Venus on Nov 26th  and then in Sun on Nov 27th, we may see some upsides these two days.My feeling is we use whatever upsides we get on November 26th and 27th to get out out of long positions and short Nifty.Of course only when price moves in the direction we expect.Planetary positions and declinations both point out to declines ahead.
Lunar negative period ends on December 03rd. Possibly Wave 4 should terminate on December 03rd.
So our take is some positive in the beginning of the week and then negative for rest of the week.
We will look at wave counts and Nifty levels in a subsequent post.
As usual, whatever we project here are conjectures. Price movement alone is  supreme. Let us not anticipate before committing our money into market positions. 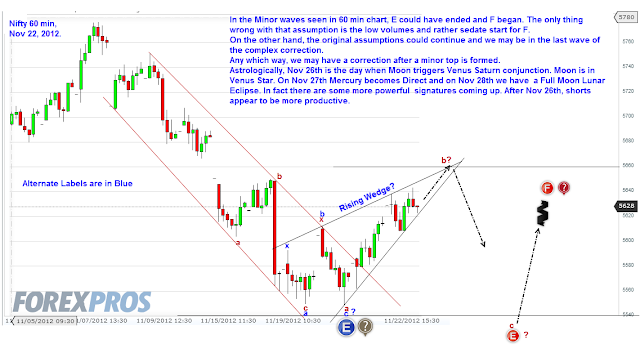 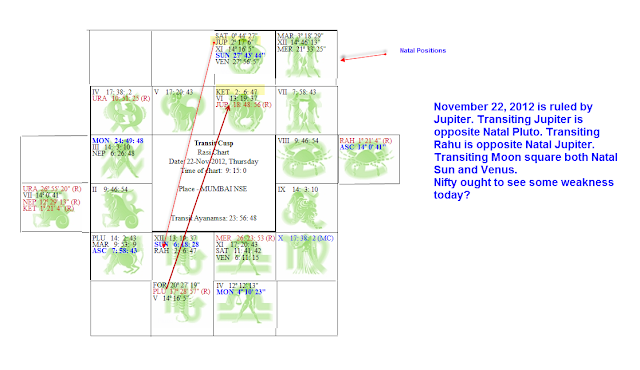 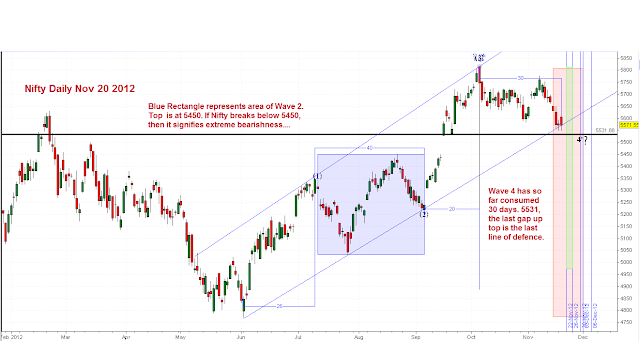 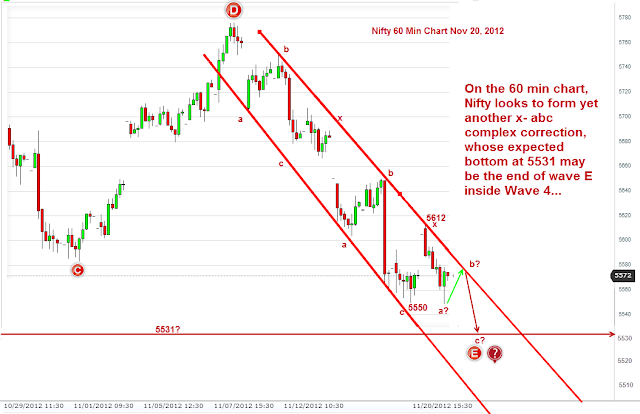 The current wave b can inside the second x combination can take one more fold down, in which case the final minor wave c could go down more than indicated.
Posted by Tekkiesuresh at 8:55:00 AM No comments:


I thought it would be interesting to compare how our expectations of last week have fared.

This week we are entering a very volatile period astrologically.
By November 26, Moon will trigger the Mars Pluto conjunction. Pluto as we know is square to Uranus. Mercury becomes direct on November 27, 2012. And by December 03, we have the all-important Jupiter Sun opposition. Throw in a Venus Saturn Conjunction In Libra and we have a virtual cauldron of high steam celestial interactions. Market movements could be exaggerated. It is a great time for trading and a bad time for investing.


Please consider the above tabulation in tandem with the wave charts given below. As per Neo Wave we have one up leg F and then one down leg G.Only then we expect wave 4 to be completed. 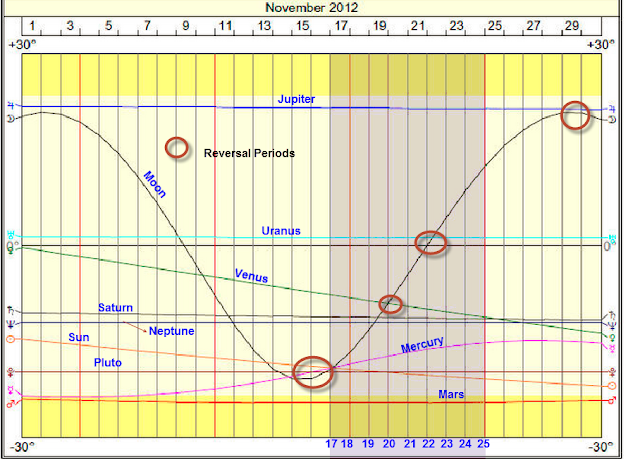 Wave Analysis:
Previous week`s remarks:
We had expected reversals on Nov 08 and 09 last week and Nifty promptly turned from 5777 to 5678, the area where we had expected Nifty to settle down. In the process, Nifty had broken the 2-4 upward trend line convincingly. At 5666, Nifty had retraced 57.17% of the up move from 5583.Since it has retraced so much from the top, we conclude that the correction is not over in Wave 4. Currently we are in minor wave E.      It has already completed three smaller waves a,,b and c. Since we expect there is some more time correction left in    wave E, we look to one more set of complex correction a, b and c connected by a missing x wave. This means correction may consume the rest of November as well...
The Scenario Now:
Wave 4 is increasing in complication.With Moon Retardation period continuing through out November, we expect the market to complete its E leg and start on Wave F upwards and G downwards finally completing the 4th wave correction. 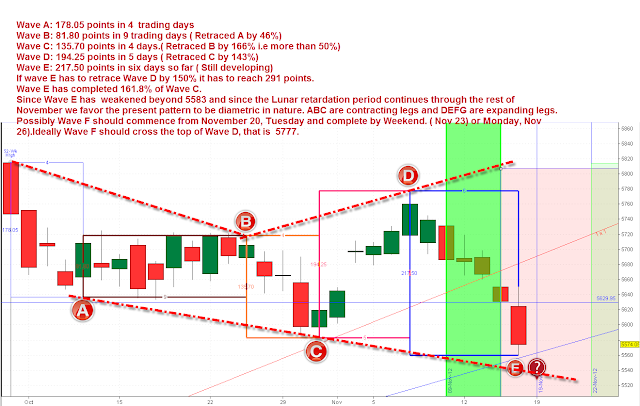 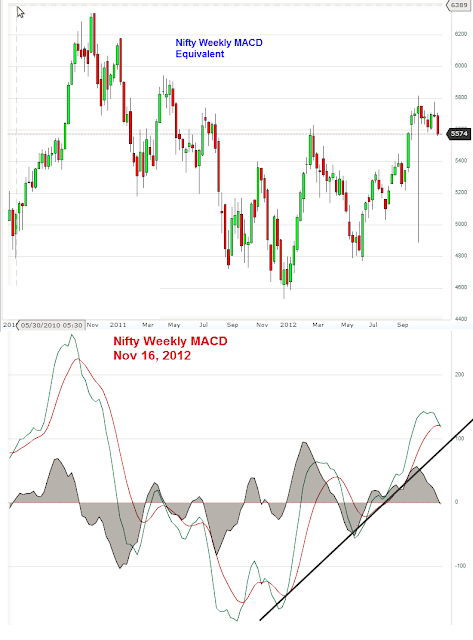 Have a great week of trading. As usual let us wait for the price to tell us where it is going. The conditions are too volatile to risk trading without stop losses. 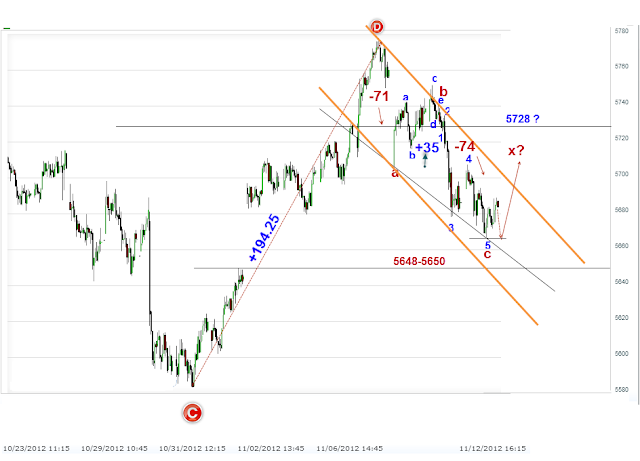 Now the Zig Zag is within a channel.It has not touched the lower trend line yet. If it does so and the bounces, we may say with some confidence that wave c is over and wave x has taken over.Wave x also cannot go more than 5728.
On the other hand, if Nifty improves strongly from c then we may consider that c point is E and the correction has ended.
But our Astro indicators are hinting at the correction continuing for some more time.Which means we may expect a small bounce as x wave and then an abc correction as indicated in the previous blog post.

On the intermediate term daily chart we may see Nifty taking support on the 1X2 Gann Angle line.

We had expected reversals on Nov 08 and 09 last week and Nifty promptly turned from 5777 to 5678, the area where we had expected Nifty to settle down. In the process, Nifty had broken the 2-4 upward trend line convincingly. At 5666, Nifty had retraced 57.17% of the up move from 5583.Since it has retraced so much from the top, we conclude that the correction is not over in Wave 4. Currently we are in minor wave E.      It has already completed three smaller waves a,,b and c. Since we expect there is some more time correction left in    wave E, we look to one more set of complex correction a, b and c connected by a missing x wave. This means correction may consume the rest of November as well...

We have still not reached a comfortable trading zone. All indices are buffeted by too many news items from all over the world. But then this is also a phase of trading life..
So please trade carefully with stop losses always. Also whatever I have said here are mere conjectures. Let us wait to see the action unfold before we commit any money into the markets.

In the meanwhile, A wonderful and auspicious Diwali is waiting for you...!

We had expected a reversal on Nov 08 and Nifty did do so today on the back of weak global cues.We expect the weakness to continue tomorrow ( Nov 09, Friday) also to continue and start the bottoming out process for Wave 04.
Here is a chart of Nifty 15 min, with just the last legs marked out. 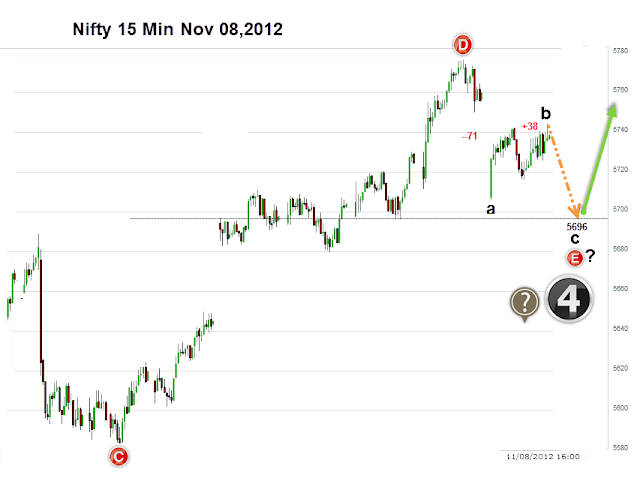 Now that the wave 4 of Wave C of the diametric D is about to be completed and wave 5 is about to begin, a look at the long term weekly chart is in order.....

It continues to be a buy on dips market and if the Nifty dips below 5700, it is a fine opportunity to buy.Since  the Lunar growth period is continuing after November 10,  the uncertainties of market will be discarded or glossed over and Nifty may move upwards.

Have a great Friday   of trading!

Fibo arcs and angle lines suggest the following support levels for today and tomorrow. It is a buy-on- dips situation. Because we are in the lunar growth period markets should recover in a couple of days.
Interestingly Mercury star, when Mercury is retrograde behaved exactly opposite to its norm! Today is ruled by Ketu-transiting  Ketu conjunct to a negative natal Jupiter. Will it also lose its positive potential and behave negatively today? It should be interesting to find out. 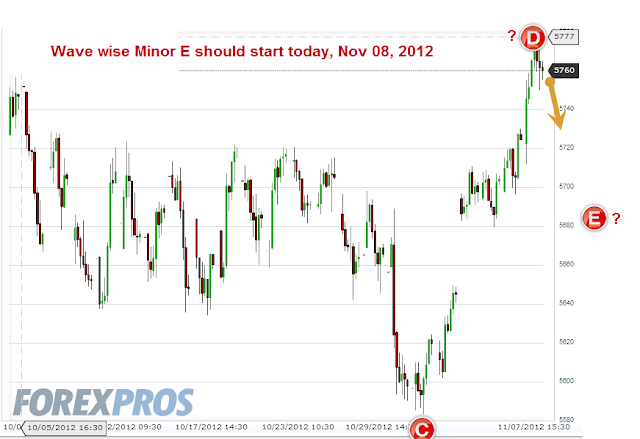 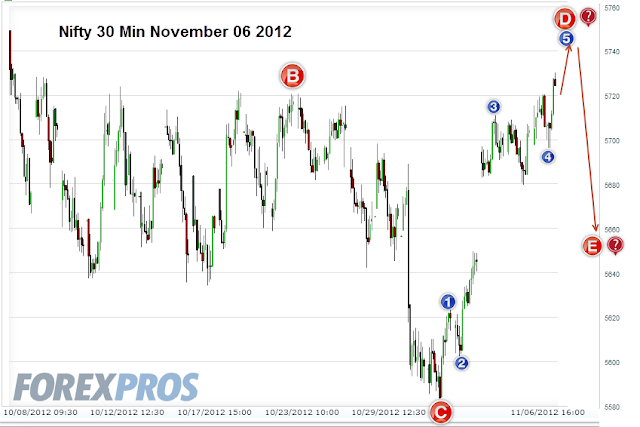 Mercury becomes retrograde on November 07, at 04.45 hrs early morning. How has Mercury retor behaved in the past? Here are a couple of charts.
Draw your own conclusions!

One clue: Mercury turning retrograde in November- December periods, in Sagittarius and Scorpio, tends to produce bullishness first. During other retro periods, it was decline first.
Mercury now is in Scorpio in Saturn star.


If 5711, is broken through upwards, then we have most probably completed Wave 04. If 5680 is broken through downwards, then Wave E is continuing for possibly one more day.However my bias is towards the former.Any way we are very close to the end of Wave 04.
Posted by Tekkiesuresh at 12:30:00 AM No comments:

Since we are in a fairly mature state of Wave 4 in Nifty, let us look at the broader picture first...

Nifty seems to have a triangular formation in Wave 04.We could argue that Nifty had bottomed out after A,B and C waves, but the time cycles do not seem to match. Since Wave 3 was of 20 days, we still have a little time left for wave 4 to bottom out, as per Neo Wave.We have a slightly expanding triangle with a downward bias. If Nifty turns down from here we may witness a Wave D failure.In any case wave 4 is close to completion.

ABC retracement, where AB  is the down leg from 5448 to 5217, show an interesting picture.

Nifty had retraced 100%  of AB on October 31 and had been rising ever since. Time-wise October 30 represents 161.8% of the time taken by AB and October 30 was a Full Moon. So using ABC retracement points along with Lunation does provide us with clues to market movements.
November 05 represents 200% of the time period of AB.Let us see what happens on Monday!
November 13, is the time when 261.8% of the time of AB formation would come to pass.November 13 is also the total Solar Eclipse Day.November 15 is a New Moon. So can we expect another short term price reversal then?

While for the uninitiated, Nifty appears to be meandering aimlessly since October 05, just look at the mathematical balance and precision in Nifty`s movements!We can sense Fibonacci everywhere! 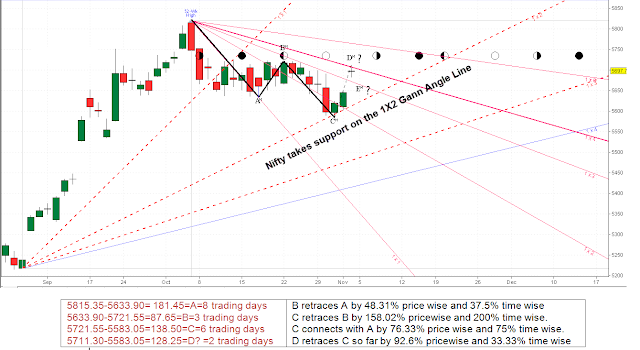 Additionally Nifty had taken support on the upward 1x2 Gann Angle line and had met resistance on the downward 1x4 Gann angle line.


Have a great week of safe and productive trading!
Posted by Tekkiesuresh at 1:30:00 PM 2 comments:

Let us start this week with a look at the Declinations: I have added the aspects for each day for additional information. This is experimental and is eventually intended to bring in more understanding for intraday movements. We first attempt to understand day wise movements. 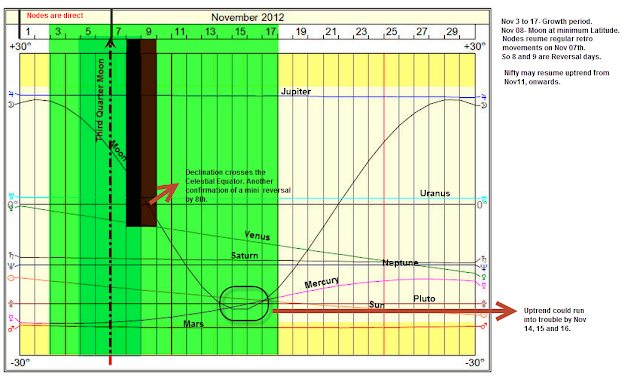 We are entering a Lunar Growth Period from Nov 03 to 17.Nifty reacted positively on Nov 01 and 02, when Lunar declinations reached the maximum Northern limit and when Moon`s declination was closest to Jupiter.


Please use the above tabulation as a guideline only. Allow the price to dictate your trading strategies. It is dangerous to trade without adequate stop losses in this Nifty phase.
Have a great week of trading.
Posted by Tekkiesuresh at 11:25:00 AM 1 comment: