Nifty has now completed 48 days in the current cycle.It has now extended by 50% over the cycle times of previous two cycles.Fifth sub-cycle has already completed 8 days and is very much in the topping zone.
Strong weekly closing and PCR indicate some more up move but the head room is limited to another 200 to 250 points maximum.Market breadth had started turning negative and an important constituent like Bank Nifty declined by 421 points on Friday.Most FNO counters saw long unwinding and Reliance was propped up mainly by heavy short covering.
We had mentioned about the triple oppositions of Sun-Pluto, Sun-Jupiter and  Sun-Saturn in the last two weeks. We can see here how the world indices had reacted to the astro aspects. 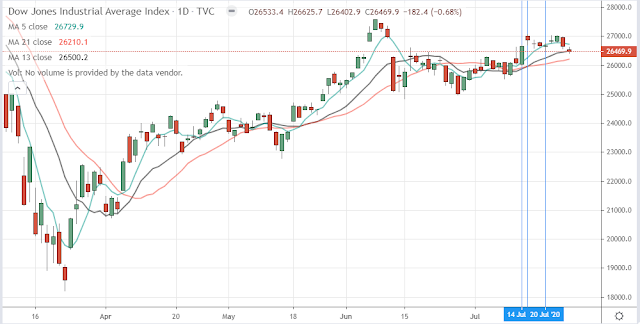 The Dow had seen two back to back negative days in the last week. 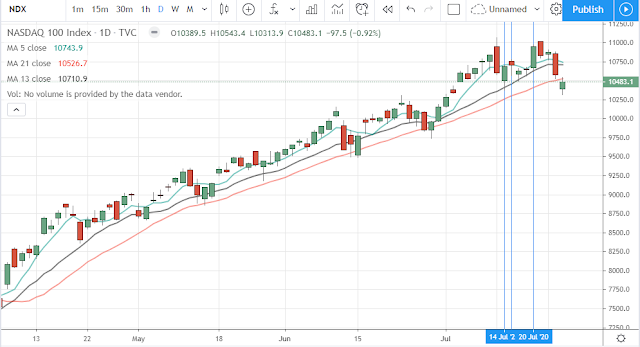 And so does Nasdaq. 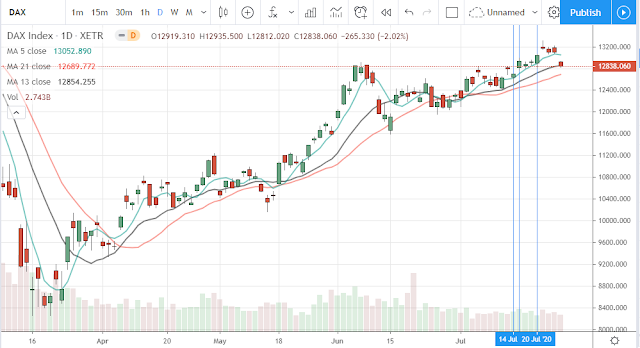 German DAX had fallen with a gap... 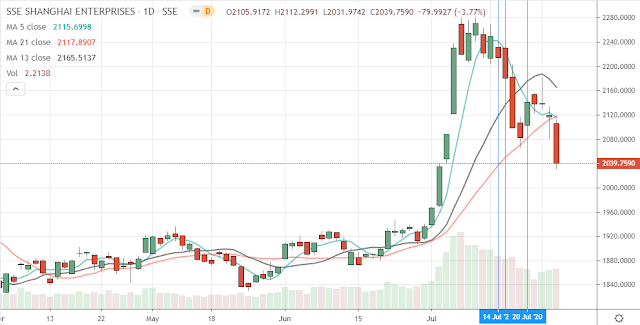 Despite a roaring bull move, look at the Chinese Index! 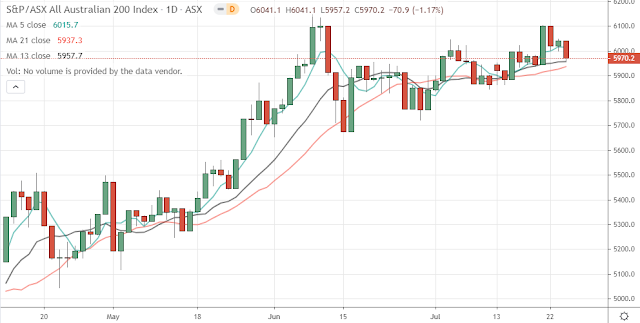 And the Australian Index also is reacting in sympathy...
Our Nifty is holding itself high...Such divergence is a sign of caution...
Fibo time cycles are also advocating caution...

We continue to be bullish on Nifty but after a correction. So our expectation is take profits sooner and have cash in the sidelines for another good buying opportunity.
Have a great week ahead!
Posted by Tekkiesuresh at 8:52:00 PM No comments:

Last week,  before July 13th, we had made two observations.
1. Volatility is going to increase. 2. Nifty has stiff resistance overhead.
Nifty opened at 10851 on July 13th, and went down to 10563 in the next three days and in the final two days ( July 16th and 17th ) moved up to a high of 10933 before closing the week at 10901.70.
Nifty closes at its highest post March 23, 2020.
Coming to cycles, Nifty has completed 43 days in its current cycle.
The fifth sub cycle ( anticipating this to be the last in this cycle ) has started upwards and completed three days.It has taken out the last sub cycle high of 10894.So immediately Nifty looks to move higher.
However there are several overhead resistances to be overcome.
Last week we had completed the oppositions of Sun and Jupiter as well as Sun and Pluto. On Monday, July 20th, we have the last of the trio, Sun opposite Saturn, the most stressful of the lot.
Soon Moon will join Sun in Cancer to oppose Saturn.
Things are never quiet in Cancer, especially if Saturn is transiting in Capricorn opposing it.This will add to the volatility of the markets.
Venus which was hitherto quite slow shall start picking up speed till it reaches its maximum by January 26, 2021.  Venus is the queen of Taurus and she always likes excitement like her neighbor, Mercury.
Another factor to consider is the Inter-market Divergence between indices... 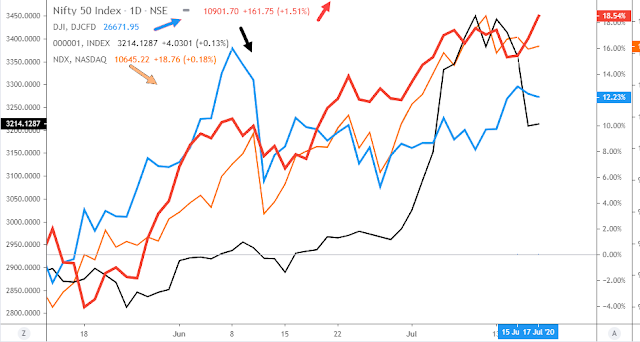 We find Nifty and Dow Jones have gone up but Shanghai Index and Nasdaq have dropped.Such divergences are always a sign of caution.

Saturn may possibly bring in a reality check this week. If prices drop for a few days it is a great opportunity to buy because the world is still immersed in Neptunian fantasies !
Play safe! Stay Safe!
Posted by Tekkiesuresh at 6:22:00 PM No comments:

Last week ( July 06 to 10 ) markets did not particularly go anywhere.
Nifty opened the week at 10723, made a high of 10847, low of 10676 and closed at 10768. It was like running on a treadmill!
The uptrend became flattened a little. But for the effervescent Reliance and the Bajaj Finance twins, Nifty chart would have looked a lot uglier.
Nifty has completed 38 days in its second cycle which commenced on May 18th.
As discussed  during last week, we are entering an important cycle top zone.
Last week we had some bullish aspects which had pulled up the markets. Sun translating the energies of Jupiter and Pluto also acts as a magnet.
This week we are in the orb of Venus Direct and triple witching of the eclipses.
We also start the week with Mercury turning Direct and moving away from the clutches of Rahu.
Also this week we have the triple opposition combination of Sun opposing Retro Jupiter, Pluto and Saturn.
So volatility is going to increase. More sharp moves are possible.
Nifty is also heading into a big band of resistance overhead.
10635 to 11183 is a stiff block to negotiate.

Despite this our take is that the bull has not finished its business. The next cycle also is going to be a bullish one. So any shake outs can be a great opportunity to buy some quick movers.

We have been so preoccupied with Nifty. So how do the moving parts of Nify function?

These stocks have been performing better than Nifty since June 12, 2020, where we had the previous market bottom.While Bajaj twins had moved up in excess of 20% in this last leg, Reliance with a hefty weightage had moved up 18.21% and was primarily responsible for Nifty`s up move.

This is the second set of Nifty companies which moved along with Nifty`s appreciation of 7.9% since June 12.

The above list of companies are marginally under-performing and slightly dragging Nifty.

This last set of companies are dragging the Nifty down!
Interesting times are coming especially for those who love two may movements.

The cycle which started from May 18th has now completed 33 days. Previous cycle from March 23 to May 18th was for 34 days.So we are entering a cycle topping zone.
We are in the fourth sub cycle inside the larger daily cycle. This sub cycle has also completed 6 days and is ripe for a reversal.
Sub cycle bottom is 10180. That is to be seen as a first support this week.
Mars in Pisces is going to be angular to Mercury by July 08.That is just two days away. So a reversal is to be expected.
However there are other combinations which we expect to pull the market up...One of them is the powerful opposition of Sun to Retro Jupiter on July 14th and then to Retro Pluto on July 15th. This we expect will pull the market up from an expected low this week into next week.
Also Sun has now gotten in front of Mercury in Gemini. This also augurs well for the market. Only spoilsport is Rahu in Gemini!
Same is the case with Retro Jupiter. It`s sojourn into Sagittarius is welcome news for bulls, but Pluto also is tagging along which is not so good news!
So some reduction in bull fervour is seen. The three eclipses whicxh have finally ended on June 05 also may have say in this situation.
These two planets have already met for the second time this year and they are slated to meet again on November 12, 2020.
There will be a seeming return to normalcy in this intervening period as Jupiter moves away from Pluto in a retro fashion. Markets also may rise in the next cycle but once Jupiter turns direct and approaches Pluto again, trouble may start once more.
So expecting a smaller correction this week and a rise into next week in a new sub-cycle...Next week is a different story awaiting to unfold!

To all my Gurus...of the past and in the present...Thank you for leading me to light and continuously shining on me...despite adversities...Light of Guru`s Knowledge will banish all darkness.
Posted by Tekkiesuresh at 8:13:00 AM No comments: