Jupiter in Taurus- A comparison

Every 12 years, Jupiter makes a visit to the earthy sign Taurus and spends a year there. This time  also Jupiter entered Taurus on May 17, 2012 and will leave by May 30, 2013.
Let us take a look at how was the market effect during the previous uptrend when Jupiter was in Taurus. So we look at a comparison between June 20 1988- July 04, 1989 and the present times.We have omitted 2000-2001 period because that was a downtrend.Jupiter tends to maintain whatever trend he picks up when he enters Taurus. 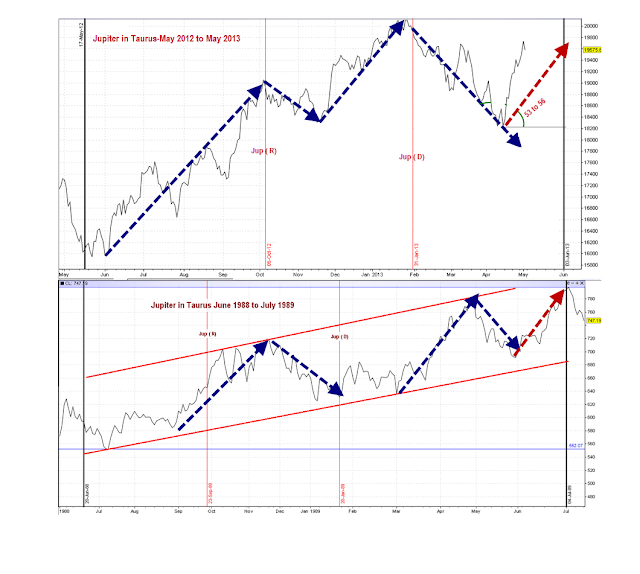 We see amazing similarities isn`t it? Even the angles of progress of Nifty across time bands, seems to match.Jupiter retro and direct stations seem to have a reversal effect most often.Last time after topping out post Jupiter leaving Taurus, Sensex went on to make a bottom on February 08, 1990-8 months,after Jupiter left Taurus in July 1989.
It is interesting to see that as per NeoWAVE, the current wave E is slated to bottom out in January or February 2014, 8 to 9 months from now!
Posted by Tekkiesuresh at 12:07:00 PM