Let us examine the Universal positions.
On May 27th and 28th, Sun squares Neptune.Venus and Mercury are conjunct Jupiter.This lasts upto May 30th.Rahu becomes natural retro by May 27th. Moon will be at its Perigee ( closest to Earth) and at a minimum declination by May 27th.
Saturn trines Neptune throughout the week.
Uranus and Pluto are square throughout.
On May 30 2013, at 20:24:26 hrs, Jupiter moves into Gemini.It will remain in Gemini till June 18,2014, 21:39:26 hrs.
On May 31, Sun and Mars begin to separate beyond 10 degrees.
on June 08, Mercury will be square Uranus and opposite Pluto:Between June 11 to 13, Venus will be opposite Pluto and square Uranus.
The long term square aspect of Uranus and Pluto gets activated in this time band of June 08 to 13.June 08 to 13 may be watched for a reversal.
As expected we had seen a declining trend from May 20 till 24. Now the trend could change again for a last upmove.
I repeat my earlier conjecture...
"By June 10, 2013, Rahu enters Ketu Sub and that could be a top formation time? Especially since Ketu is in the midpoint of Uranus and Sun? Two hot guys? "
One more thing about sensitive degree transitions...Iam reproducing this chart as a recap...
We see several planets were transiting a singular sensitive band of 22 to 27 degrees of various signs.On June 08, Sun and Moon will become conjunct and form a New Moon at 24:03:53 degrees, at 21:27:02 hours.This gives additional credence to the June 08-13 being an important time band for reversals. 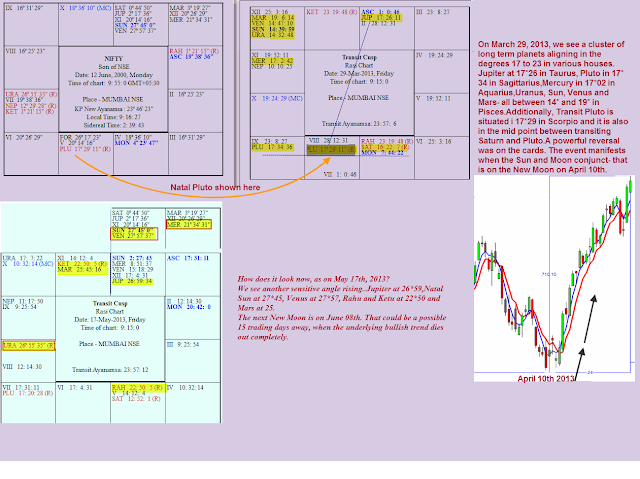 June 08: New Moon
June 09: Maximum declination ( Sunday)
June 10: Moon Apogee
June 13: Minimum Latitude.
It all seems to fit.
What sort of prices should we look..
at?
Here are expected supports. 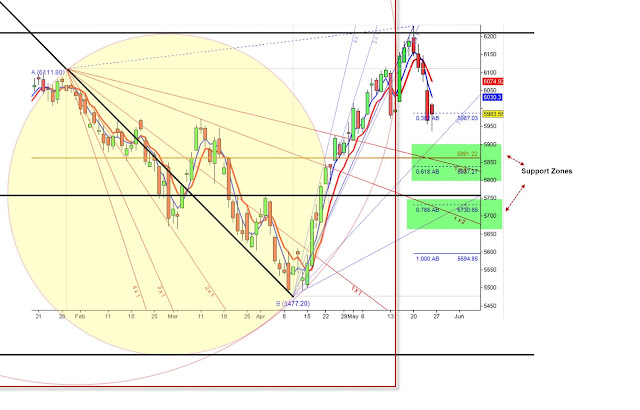 And some interesting angles.
Let us watch the 1X1 45* line..Nifty seems to like it.

Statutory warning: Wait till prices turn..Have trailing stop losses if you are short.If you intend to go short, wait for a bounce. Here again, if prices move up as anticipated we run the risk of being caught on the wrong step.So again have stop losses.If you are stopped out either way reverse direction and follow Nifty. There is still money to be made.
Posted by Tekkiesuresh at 7:13:00 PM