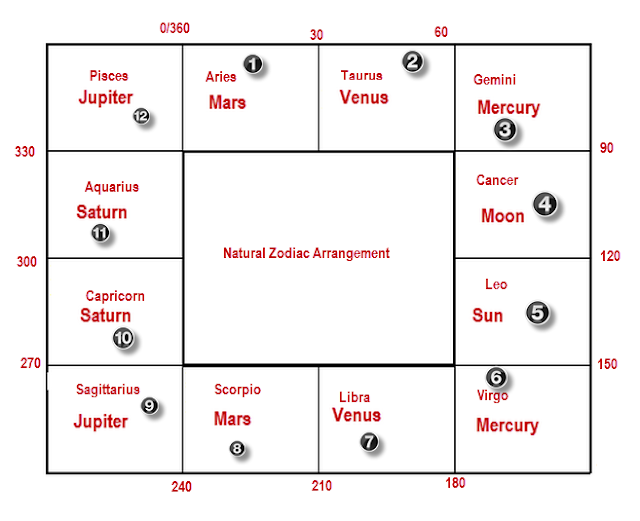 In this post, we will examine more about the signs and the planets as well.  Look at the chart again. First house is marked as Aries and it is ruled by Mars. Last house is Pisces and ruled by Jupiter.This order of the zodiac is called a Natural Zodiac.This zodiac is actually a 360 division of the sky and the divisions are represented as angles 30 60 90 etc upto 360. Note that the 360 degree and degree 0 are the same.

Planets move through the zodiac from house to house in a clockwork direction.Is this the full list?
No there are some more.
Uranus
Neptune
Pluto
Rahu
Ketu
Uranus, Neptune and Pluto are very slow moving planets with their orbits beyond Saturn.
There are two points of intersection when the Sun's path and the Moon`s path intersects.They are called Rahu and Ketu.Rahu is called as the North Node or ascending Node and Ketu is called as South Node or descending Node as well. Remember Rahu and Ketu always move counter clockwise.Amazingly every culture of the world have recognized Rahu and Ketu in various names or forms. Rahu is also known as Dragon Head and Ketus is called as Dragon Tail.These two mathematical points are very important and significant as we shall understand later.I am deliberately  keeping the descriptions simple because we are primarily only looking at astrology applications to financial markets.

Regarding directions of movement, Sun and Moon will always move clockwise, sometimes fast, sometimes slow, but they will never move in counterclockwise fashion. Clockwise movement is called Direct Motion and Counterclockwise movement is called Retrograde motion.
Retrograde motion is only an apparent motion when we see planets from the Earth.Planets actually are not moving backward, they only appear so.As we will see later, retrograde motions also have astrological significance.
All other planets, Mercury, Venus, Mars, Jupiter, Saturn, Uranus, Neptune and Pluto will go through Retrograde motions.Actually they will slow down, then will become stationary,then move back slowly, then move back faster, then slow down, become stationary again and then begin direct motion again.
Rahu and Ketu as said earlier will naturally move in a retrograde fashion.
Another thing, Rahu and Ketu will always be 180* apart, no matter where they are in the zodiac. 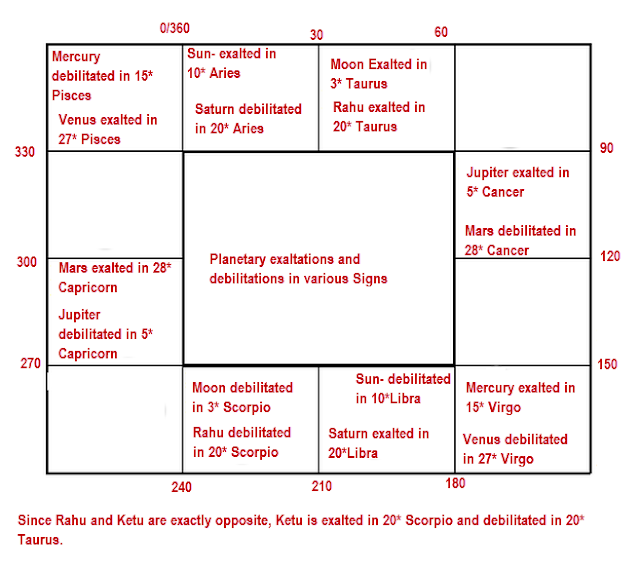 Please remember to commit these basic fundas to memory. We will be referring them again and again. Since there is a lot of new data, we will take them little by little.

So it is bye for now!