Astro Technicals for May 20 to 24- The astro part

There are several interesting astro aspects in the balance portion of May 2013 and from June onwards.I had detailed out a chart explaining the various long term formation in store for us for the rest of 2013. One of the most important of them- Uranus square Pluto is on May 20, 2013.Long term formations do not give effect on the day of their exact signature -they will always have an orb of influence.They need one more planet, a slow moving one to connect among themselves.
So
on June 08, Mercury will be square Uranus and opposite Pluto:
Between June 11 to 13, Venus will be opposite Pluto and square Uranus.
June 08 to 13 may be watched for a reversal.One thing to be noted is that Uranus is a planet of unpredictability.Gemini is a dual sign. Mercury its lord, who is also in Gemini is known for its dualistic approach.So any reversal or fall in prices may be quickly offset- or the fall could be deeper than expected. In other words let us expect the unexpected.
We see that from May 15th, Nifty has entered its Venus Bhukti  Venus Antara and Rahu sookshma. We have seen earlier that in market conditions where there wasn't any meaningful correction in Sun and Mars sookshma, Rahu brings about the needed correction..

Another interesting astro aspect is the joint celestial movements of Sun and Mars...
See this....

Within 3 days of Sun and Mars coming together, an intermediate top was formed and Nifty began a decline. 3 days before they become conjunct, Nifty begins a powerful ascent which is still continuing.
Sun and Mars will be separated beyond 10 degrees on May 31,-what is going to happen then?
Let us look at the past for a guideline...

Nine days after separating beyond 10 degrees, Nifty had fallen 500 points within 18 trading days..
In our present situation, 9 trading days comes to June 13.So will there be a top by June 13?
We had seen that Uranus Pluto combination points out to a top between June 08 and 13, 2013.
Are there other astro evidences? 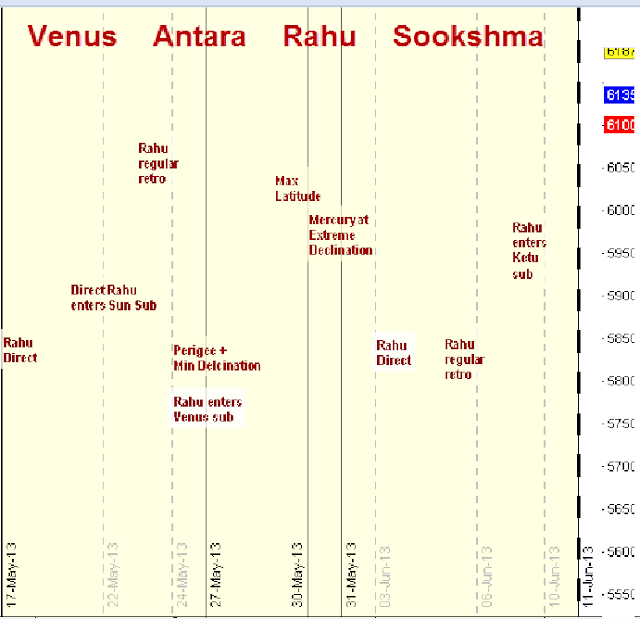 we saw that Venus Antara Rahu Sookshma tends to produce reversals from crests depending on other astrological aspects present.I have given a little more detailed picture on what is happening to Rahu during this time and how are the lunar factors shaping up..
We know Rahu and Ketu move in a retrograde fashion. So after Venus sub what should come is not Sun Sub, but for retro movement we should have Ketu, Mercury, Saturn and Jupiter.On May 17,Rahu is direct and behaves like other direct moving planets.Till May 24, it moves direct. Then becomes retro. This retro to direct to retro movement sometimes causes short term reversals in the market.Effects of Perigee and minimum declination of the Moon happens on May 27. So maybe we see a consolidation or slight decline till May 27 and then the up-trend resumes again.     Latitude and Mercury declination may add more steam till June 03. Then again it looks like consolidation..By June 10, 2013, Rahu enters Ketu Sub and that could be a top formation time? Especially since Ketu is in the midpoint of Uranus and Sun? Two hot guys?

Interesting times astrologically, like I said in the beginning.
For us traders, just hold on to the moving averages and start hedging as the market climbs higher. With so much of up trend already complete risk favours not to be indiscriminately long.

Some of the other indices are not showing as much enthusiasm as the Nifty. Any rally where the broader market does not participate as much, must be treated with caution.

Have a nice week of trading! Astro tutorials will be taken up next week.