For several months, I had been wanting to start off the tutorials on Financial Astrology. But time pressure had never allowed me to do so.Many friends had been requesting personally to initiate such a series. They feel it will help them understand this complex subject a little better. And unless the basics are known, application of such basics to another complex universe such as trading will be difficult, if not impossible.
I propose to start off in a simple way. Though I begin on a weekday  I am more comfortable posting lessons only on Sundays and Holidays.
According to me, all sciences are divine. So there is nothing specially divine about Astrology. It is a true science where specific results may be obtained by following the same set of rules, over and over again.
Enough of the preamble..... 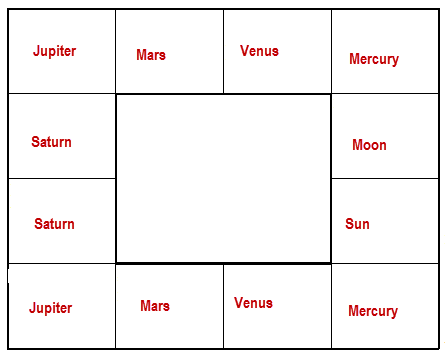 This is a typical South Indian Astro chart.There are 12 houses and each of the house is ruled by a planet. Some like Jupiter, Mars, Saturn, Venus and Mercury have two houses each, whereas the Sun and the Moon have only one house each. 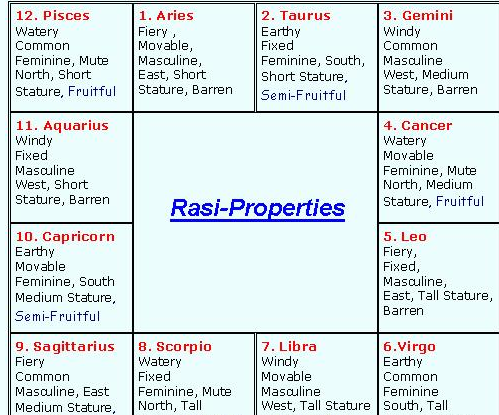 In this chart, there are some more details.
First House is called Aries and we know it is ruled by Mars ( from the first chart.)
And the twelfth house is Pisces, ruled by Jupiter.
Several qualities of each of the signs is also mentioned in each of the boxes.
So if you take Aries, then we find this sign ruled by Mars, which itself is an angry planet,
is
Fiery: Positive outgoing energy
Movable: Action oriented.If planets are placed here, during their ceaseless movement across all 12 houses throughout the year, we can expect several actions to be seen in the outer world. Actions are nothing but manifestation of thoughts from inside us or acts of nature.
Masculine:Male energy manifestations
Barren: Most often action will be initiated here but end result will be seen somewhere else.

Next lesson we will see more about the nature of each of these signs and we will also look into nature of the planets themselves.