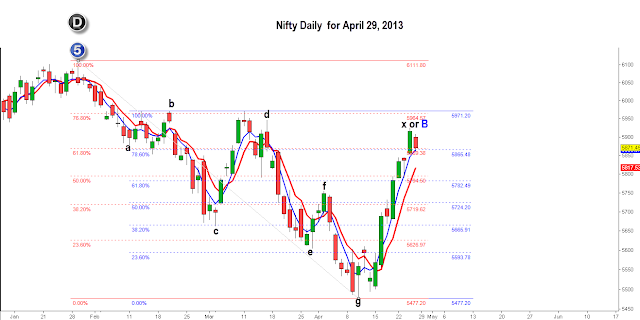 Nifty has now recovered 445 points and has closed above 61.8% retracement level of the down move from 6111.80.If Nifty keeps moving up to 5964 or 5971 levels, we will maintain, the labelling as Wave B of a Flat correction from 6111.80.
On the other hand, if Nifty weakens from here and closes below 5817, then we would tentatively conclude that there is one more corrective leg in the offing and this retracement would be labelled as an x wave and we would expect another abc to unfold. The c of which could go below 5478 and that would conclude wave A, the first downleg from 6111.80. Wave B should then start from that point. In this second scenario, wave a may not correct dramatically downwards, but could float around- this is especially true because RBI`s Annual Policy is round the corner.
As the previous two blog posts suggest even astrologically there is only less room for up moves. So caution with longs is indicated. Strict stop losses and an un-anticipatory approach to the markets, is the need of the hour.
Posted by Tekkiesuresh at 10:31:00 PM