Nifty and the Eclipses- An Analysis

We had a total Lunar Eclipse on October 08, 2014 and now we have a partial Solar Eclipse on the night of October 23, 2014, ( morning of 24th in fact) between 1.08 am and 5.22 am.
Now eclipses have been coming and going and every time one comes up there is a lot of speculation as to what effect it could have on us and especially on the Financial Markets.
A Solar Eclipse occurs only when a New Moon occurs. In fact a solar eclipse is nothing but a specialized type of New Moon or Amavasya as we call it in India.
As traders our interest is in knowing what was the effect of these eclipses on Nifty in the past years.
I have simply plotted the Eclipse dates on to Nifty daily and here is what we see... 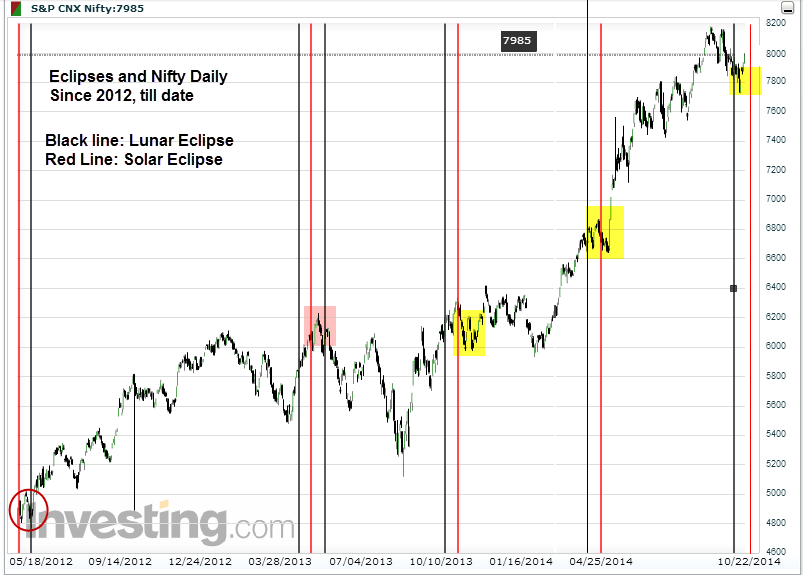 
This eclipse is happening when Rahu is in Virgo. So I thought it would be a good idea to go back 18 years and see what happened when Rahu was in Virgo last time......

The trend in 1996 was an intermediate  (or long term?) down trend and we had a lunar followed by a solar in September and October 1996.Market continued past the Full  Moon and reversed close to the Solar Eclipse and then after forming a top after the eclipse it continued with the original downtrend.
In October 2014, also the market continued past the Full Moon of October 08 and formed a seeming reversal on October 17, 2014.It has been rising since then.
So there is every possibility that we form a top after the Solar Eclipse and decline to a bottom.
Of course, we want one answer.
Which of these has a better possibility?
For that we examine the day charts of solar eclipse day in 1996 and in 2014...

First set of charts pertain to 2014 October and below that we have the 1996 charts.
During the eclipse, Sun, Moon and Venus are literally one on top of each other in Libra.All of them are in Mars star.Mercury is afflicted by Rahu, but direction wise Rahu and Mercury are in alignment.Rahu is also in Mars star. Mars is in the star of Ketu. Malefic power is more and so a decline is round the corner.
But, but, but, both Sun and Venus had formed squares in Pluto and both of them indicated a powerful bottom. I had been writing about this for quite some time now.
This happened from  October 04 to 06 and by October 17 we were just 6 trading  days after the square. And so the powerful bottom of October 17 came to be. If so the decline indicated by the eclipses could only be able to form a higher bottom, post the eclipse.
So out of choices 1 and 2 I prefer 1.

There are some interesting correlations between 1996 and 2014. See the writing in black... 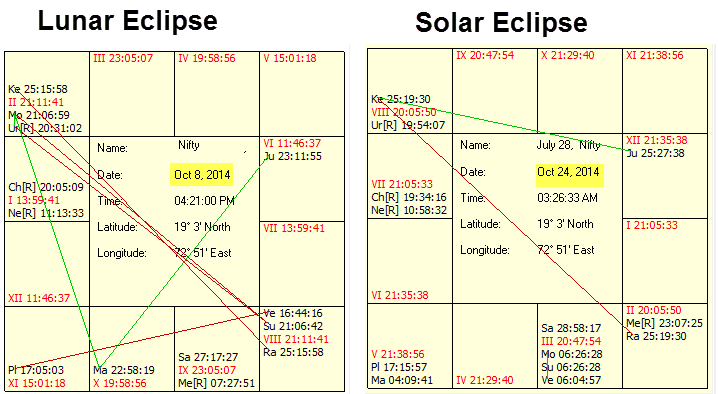 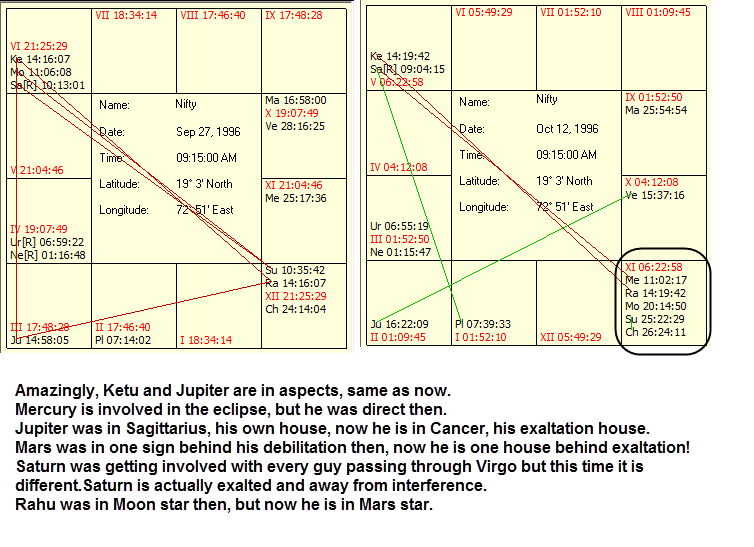 This also indicates that we may have an astro inversion coming up. That means post the eclipse, after a bottom, market should go up for some time to come !

This is just an empirical analysis. Please base your trades only on the basis of competent technical advice, after observing due stop losses.
Please write to me your observations.