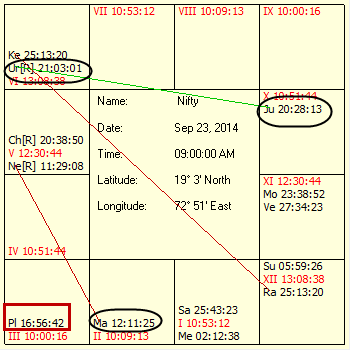 At last, September is over. It had been a significant month where we were on the edges of our seats as far as trading is concerned. There were so many views flying thick and fast, stating that we are hitting a top and severe market declines are round the corner. Entering October, the uncertainty has only increased. One thing is certain. The more we move away from September, without a significant market correction, the more is the certainty that we are in a new bull market. I continue to rely on aspects and signs primarily because we are in a connected world and what works universally works for our markets also.
Let us start a day by day astro look from September 23 onwards and see how things look:
By 23rd September Pluto turns direct. This is a significant signature suggesting reversals. Market reverses downward again. So the reversal which began on September 08, is helped by Rahu afflicting Mercury and now by Pluto becoming direct. So the negativity looks like continuing unless something positive happens.
By September 25, Venus moves into Virgo, her house of debilitation. So now, we have Mercury weak because it has moved out of exaltation, Sun, not as strong, because he has moved out of Leo and is moving to Libra, his sign of debilitation and Venus, weak, because of her debilitation in Virgo. Venus and Sun have to confront Rahu, while Mercury had already had his stomach full. All of them have to face opposition by Uranus as well.
So the negative trend will continue.
October 2014
We begin the month of October with several global issues, the latest being the Hong Kong protests. I have been pointing out the abrasive effects of Mars-Uranus and Jupiter all being in water signs from a KP perspective and in Fire signs from a Sayana perspective. All it means is that the energies of these planets flow easily and seamlessly and so the effects will be that much more pronounced. Uranus signifies revolution and Mars will only push the limits further. Jupiterian energy will only expand it further. Look at the inhuman actions shown by the ISIS Militants in the Middle East. No one is willing to give an inch. As pointed earlier some of the fast moving planets are all getting into weakening positions and that does not augur well at all.   The only hope is Saturn, who rules structures, who is still in his exaltation sign. So no far reaching structural changes would happen whether in the broader world or in the market world, yet.
October 02 Mars squares Chiron.. More of wounds and war.
October 03: Mars joins Uranus in a trine. Jupiter is about to leave the trine. Sun squares Pluto. This suggests more intensity. Markets which are falling will continue in the same vein.
October 04: Mercury begins its retrograde motion. Whatever trend which begins now, may have to be revisited by October 16, when Retrograde Mercury conjuncts Sun. Importantly, this Mercury activates the Saturn-Uranus midpoint at 08*of Capricorn. That Moon is present in the vicinity is no help at all.. In addition, Mercury is in its extreme declination at 16.47 hours, today.So more stress is in the offing in this retrograde.
October 05: Jupiter Uranus trine ends. Mars instead begins a trine with Uranus. So spectacular fireworks will continue. Effects will be seen on Monday.
October 06: With already a square with Pluto, Sun opposes Uranus. This could be extremely volatile to say the least. Stop losses will disappear in a jiffy and markets could move in both directions. Looking into other astro formations, I favour declines to happen. Such effects are not seen on the day of the formation but a little later. Mostly a third planet will channelize the energy and cause it to manifest.Moon is increasingly important this month because of its involvement in two eclipses, Lunar on October 08 and Solar on October 23. On this day, Moon is at its closest distance from the Earth. So collective psyche will be affected.
October 07: It is now the turn of Venus to square Pluto and force a standoff. Now this is the first signature which signifies a powerful trough nearby. It is time to be careful of shorts, but usually the trough forms at least after 5 trading days.From the chart below, we see how Uranus and Sun are getting into an opposition. On this day, October 07, Uranus gets into its declination extreme. This only makes the effect of Uranus more pronounced. 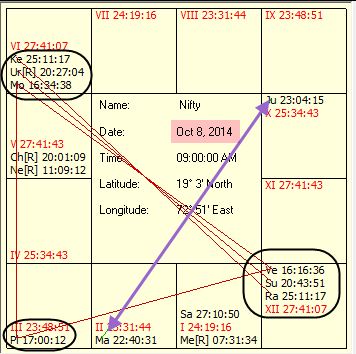 October 08: This is an interesting day.
The Sun Uranus opposition energy is channelized by Moon opposing Sun and Rahu being very close. Full Moon happens a little before the Lunar Eclipse, at 16.21 hours.
In other words we have a Lunar Eclipse which is opposed by Uranus..

And that Uranus is in trine with Mars.
And that Mars is in trine with Jupiter!
Do we need more proof of volatility?
This Lunar eclipse occurs just on the horizon or below the horizon. So the slanting rays of the Sun which gives a reddish hue to the Earth due to refraction because of dust in the atmosphere, gives a reddish reflection on to the Moon. So the Moon may appear red wherever it is visible. This is called a Blood Moon and it is supposed to have evil portends.In fact we are in a Lunar instability period from September 29 to October 20, 2014.
October 09: Ketu joins Jupiter and Mars in a trine. Rahu comes to the midpoint of Jupiter and Mars. Market reversal is nearby if not on already. Cover all shorts and let us get ready for a reversal. But wait till Sun passes Rahu. They are just less than 3 degrees apart.
October 10: Venus does what the Sun did. She manages to hold Pluto in a square and also opposes Uranus. This is one more sign of a reversal.
October 13: Sun would have passed the Rahu Ketu axis. He is in trine with Moon who also is in opposition with Mars. Markets may turn up today, but may fall again when Venus comes in contact with Rahu. In other words, this formation favours a double bottom.Moon also is at its maximum declination.
October 14: A remarkable day when Ketu opposes Venus, Sun and Rahu. Trines with Mars and Jupiter. This again is a sign of a big reversal.
October 15: This is the day when Venus also conjuncts Rahu. Now there is only one more conjunction left. That is when Mercury comes back to conjunct Rahu.
So all the pent up reversal energies may possible erupt and may propel the market upwards.
In short our astrological expectations are for the market to decline, form a double bottom and then climb up again. All this could happen between October 07 to October 16.
Remember however that several aspects involve Uranus and Mars here.
So be prepared if the market takes a totally different series of movements!
Have stop losses and confirm the expected moves technically.
Here is a chart which shows Nifty dasa movements in October 2014... 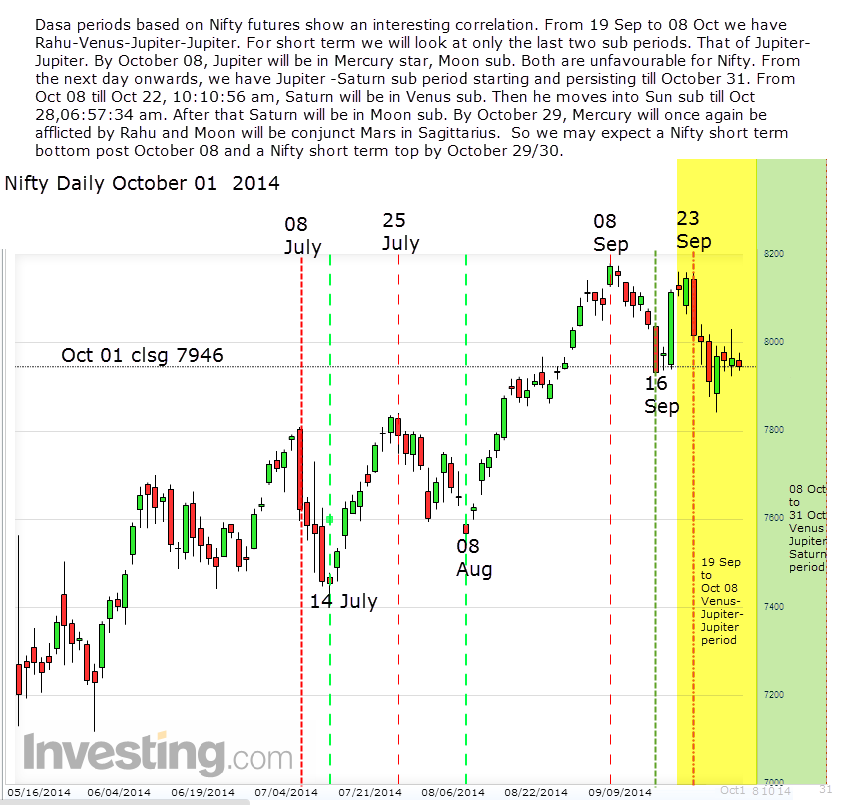 Do trade carefully, because the skies do not look stable right now.
Posted by Tekkiesuresh at 12:43:00 AM