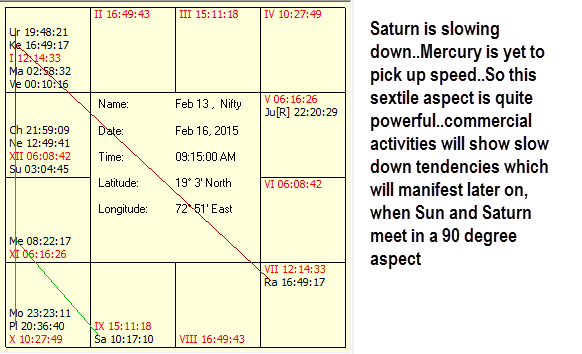 On February 13, 2015, Mars has moved into Pisces. Here it will move through Jupiter, Saturn and Mercury stars.
We see that Mars in Pisces will form a peak and then a down trend starts in most cases.
On February 16, 2015, Venus ingresses into Pisces as well. Venus in Pisces also corresponds to a peak formation and a down trend later on.
February 19, 2015, 05.17.08 am. We have a New Moon in Aquarius. This New Moon triggers the mid-point of Uranus Pluto square. At 12.57 hours, the same day, Moon will be the closest to the Earth. This could increase the intensity of the New Moon. New Moon is in Mars star, and Mars is in Pisces in the star of Saturn. So we may expect more news of reforms, some of them radical. Since Saturn and Mars are involved will it be a little bitter?
Also Rahu is in the mid-point of Jupiter Saturn formation. So there is confusion in the minds of powers that be as to the next course of action. While Jupiter wants to give, Saturn does not want to. And Rahu acts exactly like Saturn. So any economic news may be taken only with a pinch of salt.
Anyway Sun is also in the midpoint of Uranus Pluto square. So it is something to do with Governments. My take is it will lead to more global bullishness.
On February 22, 2015, Mars and Venus are conjunct. Market tends to move up in the short term, after the conjunction.
On February 23, 2015, Sun squares Saturn and that generally corresponds to a peak within 3 to 4 days and a jerky fall immediately.
So the current uptrend looks to continue till the weekend or at best till early next week after which a short term pull back can occur.
Be on the watch out on February 19/20 also for any sudden pull back caused by the New Moon.


Next week and into March first week we have several important aspects coming up. My take is that volatility should increase from here on, notwithstanding the budget. 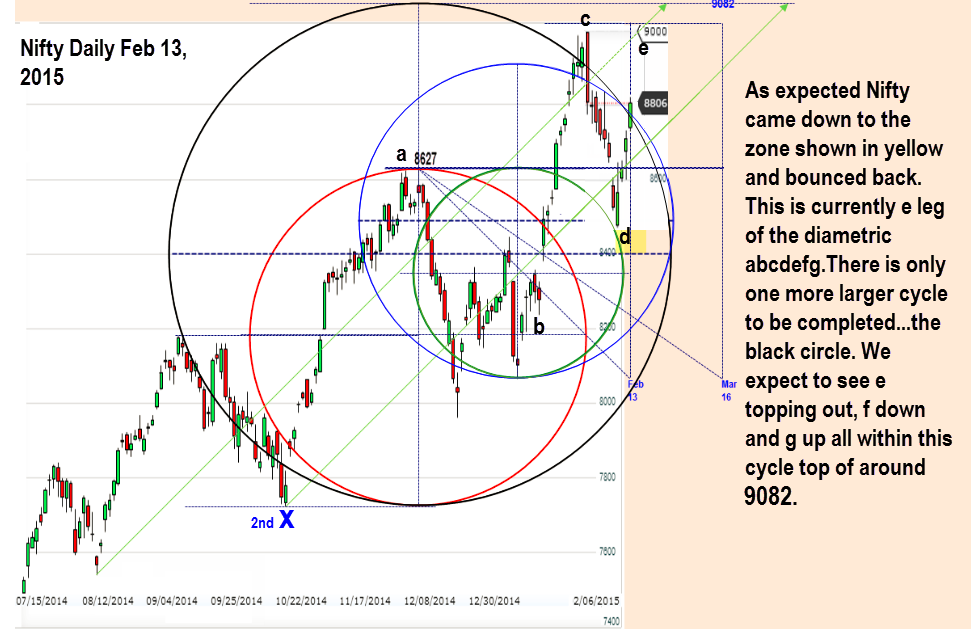 Still expect volatility spikes. . so be careful with your trades.
Let Lord Shiva guide you all the way from this Maha Shivaratri!
Posted by Tekkiesuresh at 12:51:00 AM