We saw an unbelievable week of trading go by. Markets all over the world just exploded upwards, catching most people by surprise. FOMC`s withdrawal of QE hardly made any ripple while the Bank of Japan`s reintroduction of QE was wildly welcomed.
As usual we will see the cycles, followed by an astro update.Since Iam updating nearly regularly, Iam doing away with elaborate week end reports.
Here is the cycles update.... 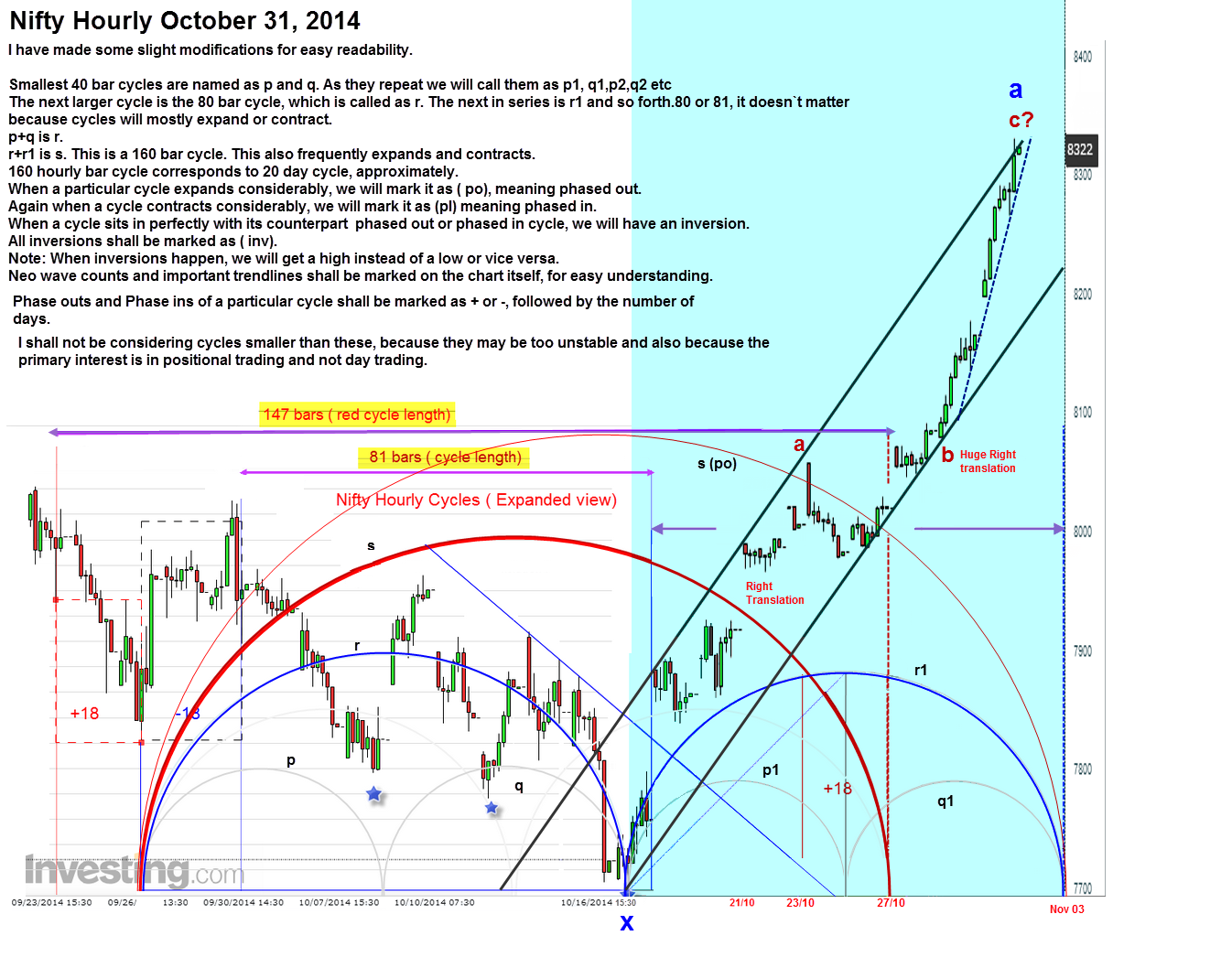 I have cleared up the chart and have introduced a simple nomenclature so that we can follow the cycles easily.We will stay with hourly charts and gradually include daily, weekly and monthly cycles.This is because our primary entry and exit points are the hourly charts.
Our first observation is that
1.Blue cycle r was right translated and predictably proved bearish.
2.Blue cycle r bottomed out at wave point x, on October 17th, along with its sub cycles, p and q.
3.Thereafter wave r1 started.
4.Normally a cycle starts out with some basing formation and low momentum.Often there by a secondary spike down as well.However r1 started off with a gap up, which meant that the momentum in r1 cycle was going to be bigger than normal.
5. We understand a cycle better, by analysing its sub cycles.So we look at p1 and q1.
6.Immediately we observe p1 was a right translation. So we now have two clues, a. p1 opened with a gap up.2. p1 was right translated. So the bigger cycle was going to be bullish.
7. When p1 bottomed out, Nifty hourly did make a few negative bars, around the 8000 level, which actually was the third clue. That if a sub cycle bottom is shallow, then the next move will be  explosive.The converse would be if a left translated cycle makes a lower top, then the decline which will follow ought to be very bearish.
8.When q1 began, the move was explosive. Even after the halfway mark, the wave continues to be heavily bullish.
So we conclude that cycle r1 is heavily right translated and so the next cycle r2 of 80 bars may be bullish.The possibilities of q1,r1 and the larger cycle s getting phased out or postponed is high. This means the cycle bottom may not be on Nov3, but may extend some more days. However, since the larger cycle s is due, a low is definitely round the corner.
From a trading perspective, new purchases may not be initiated. I have shown two parallel trend lines. The third inner trend line is literally skywards. Break of this trend line is first stage confirmation that this cycle top ( not market top for God`s sake!)  is in place.Break of the channel is the second confirmation that Nifty Hourly is looking to form a bottom.Long positions maybe liquidated, but not confident of shorts yet.Since we expect the next cycle also to be bullish, this bottom can be used to re enter longs.
I do hope this format is useful. Please send me your observations.
Do note Iam also learning alongwith you. So any mistakes, errors and omissions may be pardoned!
Posted by Tekkiesuresh at 10:26:00 PM