Last week we observed that the market is long term bullish and unless 8415 is taken out decisively with good volumes, we expect a downswing. There were several astro aspects which were pointing out to a negative outcome by way of a short term top...yet, Nifty after a fair period of consolidation, managed to  move into positive territory by crossing 8415 decisively.
Interestingly all the square aspects of Venus with Jupiter, Sun with Jupiter, Mars with Rahu and Mars with Ketu, could only cause a prolonged consolidation for 11 days..in other words they could only cause a time effect and not a price effect. This phenomena happens once in a while, when there are other larger planets involved in the picture, causing bullishness. When the faster planets complete their formations, the larger planets take over.
See this chart.... 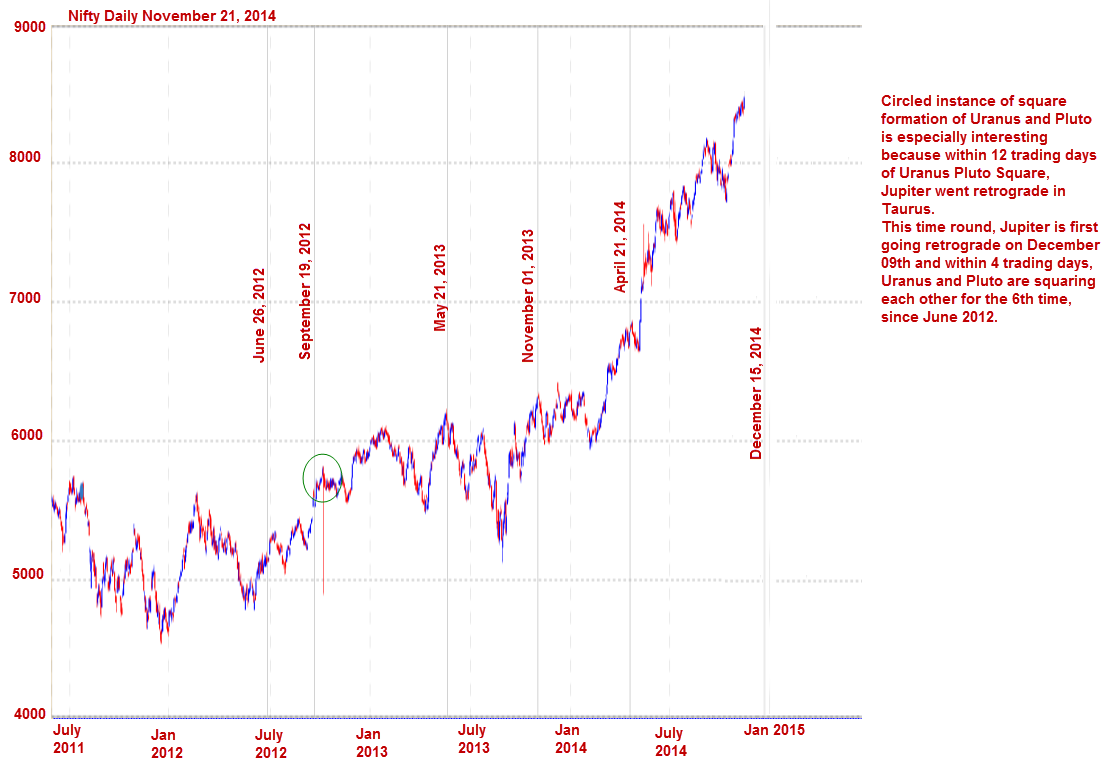 We can see that the market races up every time there is a Uranus Pluto square being formed.Magnitude of ensuing correction depends on the other planetary energies being manifested, after the Uranus Pluto square.Being slow moving planets affecting long term trends of all walks of humanity, when they are in aspect, smaller planetary aspects in the opposite direction will not be very effective. That is why so many related negative aspects could do little other than cause a pause and a consolidation ( that too a positive consolidation for 11 days!). The last formation is on March 17, 2015..which means the markets could be racing up for the grand finale then.( Curious to see that this phenomenal and rare formation begins with an 8, June 26 and ends with another 8, March 17.)
Which means after December 15, we could see some consolidation or reversal for the breath taking upmove so far.From December 04 onwards, smaller planets are also getting into positive mode, so from an astro point of view it is only buy on dips..No shorts whatsoever.
Technically, 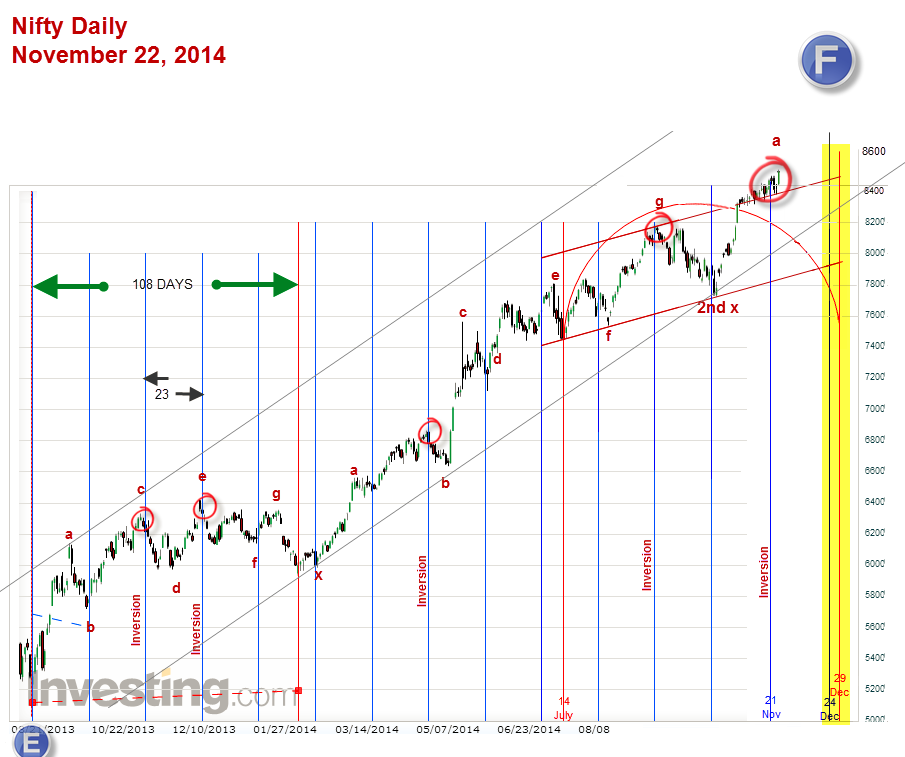 Here is an updated chart  of Neo wave counts, where I have also shown the cycle phenomena.
It is now confirmed that wave a of the 2nd x-abc formation is an impulse and is embarking on the 5th wave, Minimum target is 8600..this wave 5 inside a could show equality with wave 1 inside  a, because wave 3 was an extended affair. In rare cases wave 5 also could extend apart  from wave 3, but such an euphoric situation is not seen now. That could only happen when FIIs, DIIs and the retail investors all become buyers at the same time..which is obviously not the case yet.
Nifty has moved out of the upward channel which is a clear bullish sign.The trend will reverse as a correction when the final wave 5 is retraced in faster time and the x trendlines are pierced downwards.
Looking at the cycles, I have rounded all 23 day cycles which have shown inversions.We have just witnessed another one now. The cycle after the inversion has been seen to show a downward correction.
If we look at the 108 day cycle, we can see that it is forming a huge right translation.. This means the next cycle of 108 days will also probably be bullish to begin with.This also means that the corrections when they happen are going to be shallow affairs, till the cycle tops out. I have shown the cycle diagram as ending near 7600.This does not mean the market will come there. It is just a figurative representation of the cycle in operation. 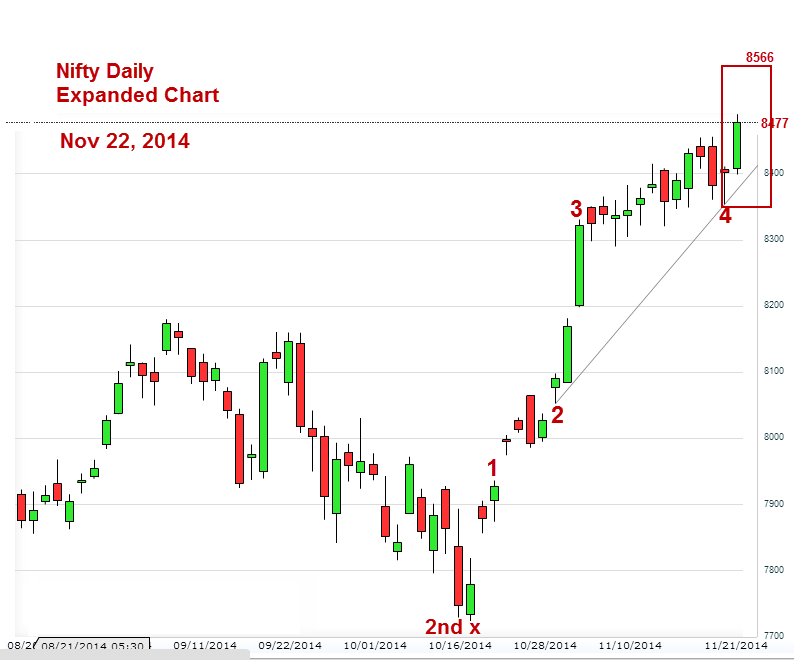 Here is an expanded view of the present wave a of 2nd x abc. 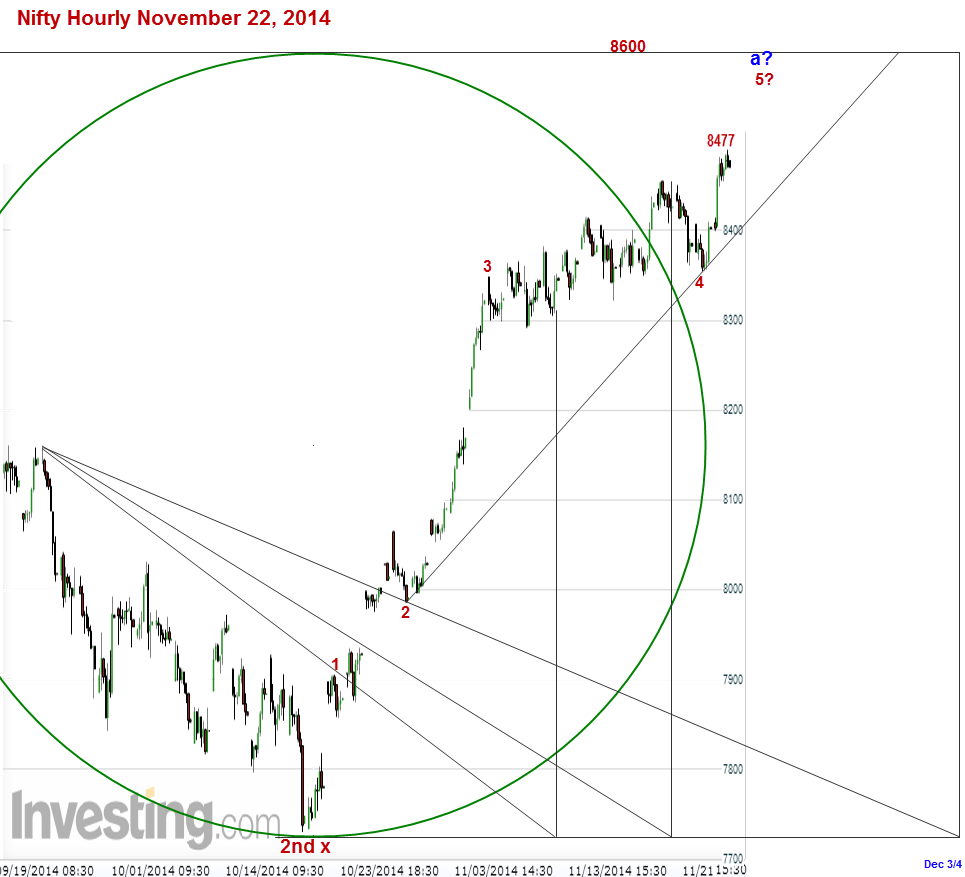 Dear mr. suresh,
many many thanks for posting your very detailed and comprehensive review
as always it is unmatched in my view.
when time permits and as this week is shortened due to Thanksgiving Holiday would please kindly take time to post your views on Dow, S&P, Nasdaq for 2015 when time permitting
with many thanks,
vick

Dear Vick,
I have posted some charts on the Dow. Please have a look.

Sameer bhai,yes, 8650 almost done..but the next cycle beginning is also bullish, because this one was right translated. So an immediate fall to 7800 may not happen.The current 5th wave should top out and then we have to watch for good lower levels.