One of the major transformations which influenced human beings collectively was the Industrial Revolution. It was the beginning of the rise of applied scientific power in terms of inventions based on discoveries.
First Industrial Revolution, fueled by the game-changing use of steam power was the transition to new manufacturing processes in Europe and the US in the period from about 1762 to 1835.
Goods that had once been painstakingly crafted by hand started to be produced in mass quantities by machines in factories, thanks to the introduction of new machines and techniques in textiles, iron making and other industries.
The Industrial Revolution transformed largely rural, agrarian societies in Europe and America into industrialized, urban ones.
First Industrial Revolution marked the rise of the West as a dominant political and economic power. Trade Development and phenomenal increase of commerce were among the major causes of the Industrial Revolution.
The Industrial Revolution began in Great Britain, and many of the technological innovations were of British origin. By the mid-18th century Britain became the world's leading commercial nation, controlling a global trading empire with colonies in North America and the Caribbean.
Britain established major commercial, political and military presence in the Indian subcontinent, through the activities of the East India Company.
The Industrial Revolution marks a major turning point in history; almost every aspect of daily life was influenced in some way. In particular, average income and population began to exhibit unprecedented sustained growth.

But things did not come easy. There was widespread resistance, fear and confusion among people before they accepted the change. Mainly because change was inevitable. 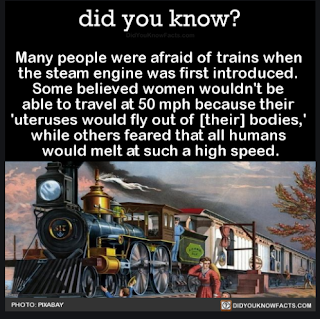 " Ugh! Ugly monstrous contraptions! Sure they won`t last..Give me a horse any day!"
This was the common attitude!
It is interesting to note where Pluto and other trans Saturnian planets transited in the skies when such a transformation happened. 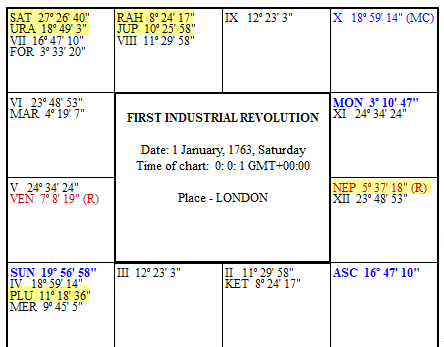 We find Pluto in Sagittarius angular to Uranus and Saturn and trine with Jupiter, Rahu and Neptune.

“Pluto a freeing and opening force is always a pattern disrupter. Pluto causes old societal structures and ways of life to crumble so that more useful forms may appear.
Pluto is the Energy of Lord Shiva who destroys so that new forms manifest.
Pluto is independent, individual, and autonomous; an extremist, isolationist and loner; a revolutionist, and is non-accepting of limiting conditions.”
Pluto  when connected to the other slow movers, brings up fears associated with survival, death and transformation; the fear to be alone, to let go, to release or to let die.
Pluto brings attention to our attitude and issues we hold about authoritarian control and use of power, how we attempt to control and how we respond to such control
Transiting Pluto is often associated  separation and deaths. Pluto actually makes us stop and check our premises, our belief systems and our attitudes..Ultimately we begin to change inside and start to accept new realities. This leads to new relationships, births, and new beginnings
Things that are not working for us, whether they are thought processes or lifestyles, undergo a transformation.
Often Intense Fear manifests  itself at the beginning of a challenging Pluto transit. How well we collectively handle that Fear is a key to survival and prosperity during Pluto highlighted times.
Wild Uranus energy was held in check by Saturn and systematically applied to the World at large to bring in real time transformation.
Yet Uranus and Pluto overcame the traditional structure of sticking to agriculture and opened up a new frontier called as Industrial revolution.
With Saturn squaring Pluto, the transformation was never easy and those who did not adapt fell by the wayside.
We also see Rahu, the classic obsessor, who magnifies the energy of Jupiter and flows it freely to Pluto. Transformation becomes an obsession magnified many times.

The Second Industrial Revolution  began in the middle of 19th century (1850-1970). It was a period of growth for pre-existing industries and expansion of new ones; such as the steel, oil and electricity fields. Development of new technologies led to introduction of two things that would change the world: public transport and planes.
Faraday started playing with the idea of electricity. Then, a few years later, Edison and Swan perfected their design of a light-bulb which was practical for home use.
in 1876,Alexander Graham Bell invented the telephone. Later on, in 1901, Marconi sent radio waves across the Atlantic Ocean for the first time.
The internal combustion engine, which powers cars today, was invented during the Second Industrial Revolution.
Here is a sample picture of the sky of those times: 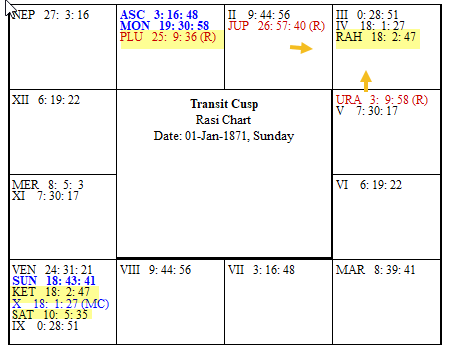 Pluto, the harbinger of transformation and Uranus, the Master of Creativity, Innovation  and unexpected changes are in Cardinal signs, Aries and Cancer respectively.In the beginning years we also see Saturn, the Master of processes being eclipsed and Jupiter joining Rahu to expand the uncertainty. Another planet of nebulousness and uncertainty, Neptune is square Saturn.
When everything changes around you quickly, uncertainty becomes a constant!

Another great catalyst of change were the World Wars, especially the Second World War.
Hitler’s invasion of Poland on First September 1939 forced Great Britain and France to declare war on Germany, and World War II had begun. Over the next six years, entire world was in conflict. More land and property around the globe were destroyed than  in any previous war. Among the estimated 45-60 million people killed were 6 million Jews murdered in Nazi concentration camps as part of Hitler’s diabolical “Final Solution,” now known as the Holocaust.
Destructive Pluto at its best...
Here is a picture of the beginning of World War 2... 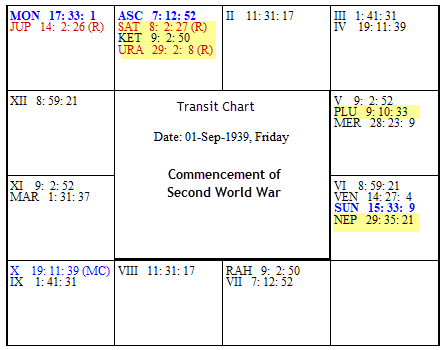 Pluto in Cancer ( cardinal ) being squared by Uranus and Saturn in Aries ( Cardinal ). A deadly combination.Misplaced euphoria of the "Thousand Year Reich" is seen in the trine between Uranus and Neptune.Jupiter in a triangle with Pluto is exaggeration of the destruction which is to follow. Saturn and Ketu in Ketu star, Pluto in Saturn star,Uranus and Neptune in Sun star, underlining the political nature of the massive conflict.
Rahu and Ketu conjoined with Saturn  manifest Fear in all it`s avatar...Fear for Life, for Loved Ones and of the Future itself.  Other than Neptune, all other Long term planets are in a waning cycle to Pluto.
History is always interesting only when it correlates to our present times.
So let us look at the skies during recent times: 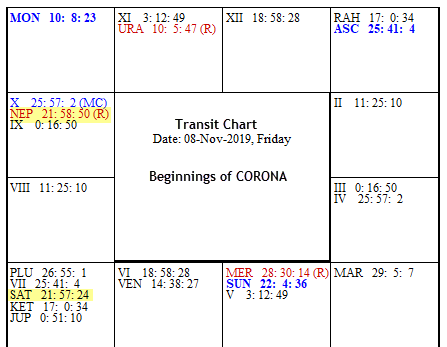 Times.com reports on the beginnings of CORONAVIRUS Infections.. 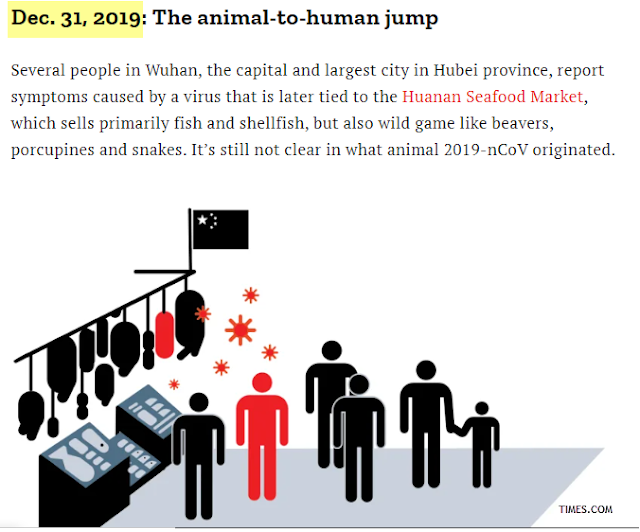 With what we know of the incubatory nature of the viral infection we may safely conclude that the virus crossed over enmasse to humans in November 2019, and manifested in December 2019 as COVID 19.
Transit chart shows Saturn powerfully aspecting Neptune with its third aspect by November 08, 2019.
Saturn is highly malefic because of its conjunction with the Ketu-Rahu axis.Both of them are in Sagittarius which has a tendency to inflate effects. To add to the fire, Jupiter, the owner of Sagittarius has just entered the scene.Of course, Pluto, the legendary transformer is present in Sagittarius in Sun star..Governments are soon to go into a tizzy over the tiny virus!
Mars aspect from Mercury sign-Chithirai star ( star of thieves ) to Pluto tells us that this infection will be hyped by media  for political gains and there are fraudulent angles unknown to public about the whole infection story. 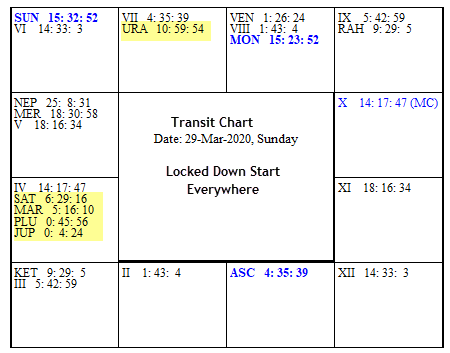 By the end of March 2020, "Lock down" has become a global phenomenon.
Once again, the deadly Capricorn-Cancer Axis has been highlighted.
Saturn, Pluto and Jupiter all in Capricorn squaring Uranus in Aries, another Cardinal sign.
And these aspects are unfolding during a very destructive Kaala Sarpa Dosha, with Ketu in powerful Ketu star and Rahu in powerful Rahu star. Malefics have become deadly.
Destruction has started in right earnest.
First the Stock markets were destroyed, with the biggest plunge in history.
Then livelihoods and jobs are being destroyed.
What is more, free movements have been destroyed succeeding the destruction of trust among fellow human beings.
And there is no end to uncertainty.
Hell, we still do not know the full nature of this virus! Has it mutated? What really are the symptoms?
However  all is not lost yet!
Some redeeming factors...
1. Kaala Sarpa Dosha will end on May 29, 2020.
2. Rahu-Ketu axis begins to move away from Sagittarius-Gemini where all the action started.
3. Slow moving Neptune, the mistress of Pandemics is involved only in the beginning and not thereafter. ( During the Spanish Flu pandemic in 1918, Neptune was conjunct Saturn in deadly Cancer. )
4. Saturn begins a historical waxing phase with Pluto, a phase connected with growth, after the transformation.
5. Since the take-off stage is from Capricorn, a phase similar to  Uttarayana ( unlike from Cancer, where it is a descend into Darkness ) things should improve gradually from hereon.

Just one hiccup..that is the prolonged Saturn Uranus Square dance from November 2020..with exact square dates of February 17, June 14 2021 and December 24 2021. So we expect the real effect of the depressive economic conditions to begin manifesting in 2021. Only after 2021, it seems, can a true recovery be possible.