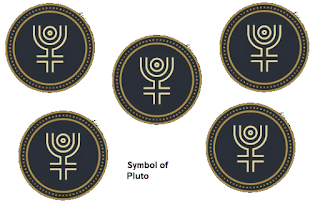 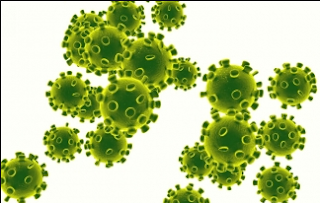 The above two images symbolize 2020 for us.  Planet Pluto and Corona virus.
Pluto represents Transformation.Its energy is extremely potent and powerful: Pluto represents the underbelly of emotions, what lies beneath the surface, and the subconscious mind.Pluto brings about transformation by merciless destruction, transformation which is essential in our growth path.
Pluto entered Uttarshada constellation on October 21, 2019 and was joined by Sun on December 26, 2019.
Planetary energy gathers strength only when more planets connect by way of conjunctions or aspects.
Along-with Pluto, Ketu, Jupiter, Sun, Moon and Mercury were also in fiery, action oriented  Sagittarius, in December 2019. We can say these other planets were eclipsed by the Rahu- Ketu axis. Ketu is the indicator of natural calamities, violent actions or events, fears and accidents. It also rules the poor and isolated That was the time, Chinese doctors were grappling with an unknown viral disease which was later named as COVID- 19.
Uttarshada is ruled by Sun which symbolizes the ruling class. So transformation was indicated, through the agency of the ruling class ( Governments ) with widespread fear as the catalyst.
Pluto entered Capricorn on February 22, 2020.Markets all over the world started tanking at the same time.Which was nothing but a manifestation of the inner, all pervading fear.
Saturn had already moved into Capricorn by January 24, 2020 still in Uttarshada.
Mars enters Capricorn Uttarshada constellation on March 22, 2020 and is closely conjunct Pluto.
Jupiter enters Capricorn Uttarshada constellation on March 29,2020. Sun was in Pisces in Saturn star in parivarthana. Since all three planets had moved away from the Sagi-Gemini nodal axis, fear lessened and Governments promised action by way of massive stimulus. Markets formed a trough and began to rise again.
But since Saturn, Pluto and Jupiter are all placed in Uttarshada in Capricorn, the woes and problems faced by the Governments and by people through Governmental actions are not going away in a hurry.
In fact these planets are staying in this constellation for a while.
Pluto retrogrades in Capricorn-Uttarshada on April 26, 2020.And moves into Sagittarius-Uttarshada on July 03, 2020. ( Unfinished business regarding far reaching transformations in progress and development.).Becomes Direct in the same constellation in Sagi on October 05, 2020.Re-enters Capricorn on December 28, 2020.And leaves Uttarshada constellation only by February 15, 2026!
Pluto returns to Uttarshada by August 03, 2026 and leavers the constellation by December 25, 2026 this time for good.
Jupiter and Saturn have comparatively lesser sojourn in Uttarshada.
Jupiter enters Sagi-Uttarshada on 08 March 2020.Crosses into Capricorn-Uttarshada on 30 March 2020 and conjuncts Pluto in Capricorn.Becomes retrograde in Cap-Uttarshada on 15 May 2020.Moves back into Sagi-Uttarshada on July 01, 2020. Leaves Sagi-Uttarshada on 27 July 2020 and rolls back into Poorvashada  ruled by Venus.Becomes Direct in Poorvashada on 13 September and re-enters Sagi Uttarshada by Direct motion on 30 October 2020.Jupiter conjuncts Pluto in Sagi-Uttarshada on 12 November 2020 and re-enters   Capricorn-Uttarshada on 20 November 2020.
By 21 December 2020, Jupiter conjuncts Saturn in Capricorn Uttarshada and finally leaves Uttarshada on 07 January 2021.
Saturn had entered Sagi-Uttarshada on 26 December 2019.Was conjunct  Pluto on 12 January 2020 in Sagi-Uttarshada. In fact by 12 and 13 January, Pluto, Saturn, Mercury and Sun were all crowding into Sagi-Uttarshada. Saturn enters Cap-Uttarshada by January 24 2020.By May 12, 2020 Saturn turns retrograde in Uttarshada and turns Direct in the same constellation by 30 September 2020.Saturn leaves Uttarshada constellation by 22 January 2021.
So we see that Pluto, Jupiter and Saturn keep literally ploughing back and forth through Uttarshada. We can expect huge transformation in the way Governments  run countries, in the very nature of Governance itself.In January 2021, Uranus from Bharani constellation also starts getting connected to Jupiter by way of a square and then squares Saturn in February 2021.Widespread losses, strife across the globe and change in every aspect of life is to be expected.
As for the markets, we may expect the bear rally to soon fizzle out especially when there is a collective retrograde expression, Saturn, Venus and Jupiter, one after the other starting from 11th to 15th May 2020.Parivarthana of Mars and Rahu in a trine just adds to the flavour..