This is what we had concluded last week...

"Putting everything together,1. The short term trend is down.2.Next week could see two way movements.3. Any rise maybe used to sell. Having said  Market could come down some more before a sustained upmove begins.4. Expect a bottom late next week, but do not anticipate and place orders.5. Negativity could spill over into the week after next,before a sustainable bottom is formed.6. We see divergences, but the price should move in our direction before positions can be taken positively.7. Trailing stop losses are a must, because volatility could increase from here on."

Nifty behaved exactly as we expected.
Let us see what is in store this week...
We begin with the Astro charts for a change..... 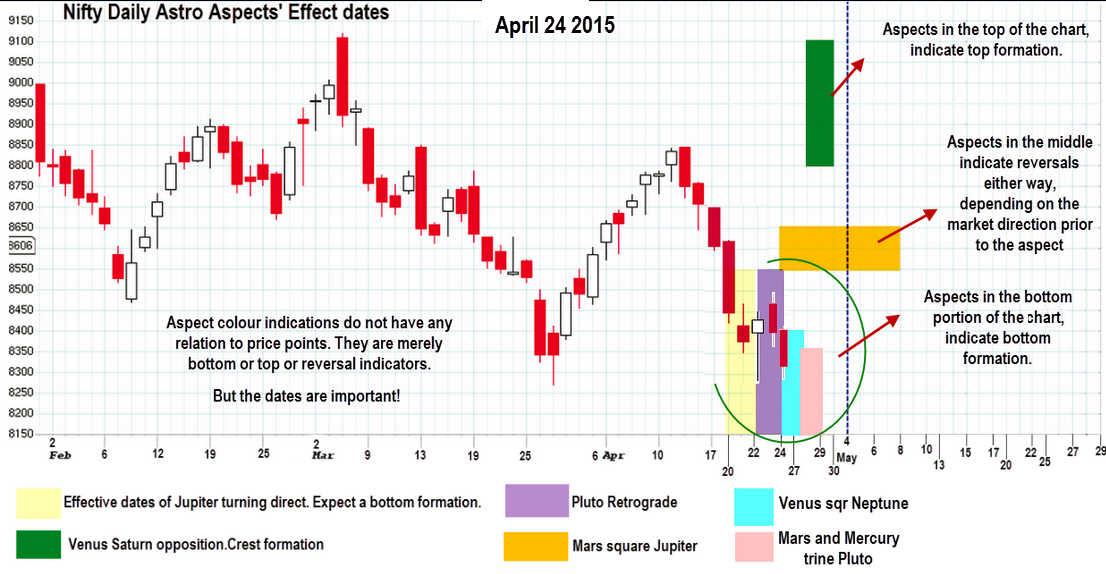 Colour bars in the bottom of the chart, point out to a probable bottom formation right now.Since we have Venus and Saturn opposition effect of a crest, we may expect the market to go up and again come down by the time we have the settlement.For very short term we may sell the longs in a couple of days and again go short for the settlement. May 04 onwards, this longer term aspects will come into being and the markets may move  more consistently.
In addition, by May 04th, Mars will be moving to Taurus and Venus to Gemini.Out of these two signs, Taurus is more important, because all planets passing through Taurus must necessarily meet the gaze of Saturn from Scorpio. All of them will have some destabilising effect bestowed upon them because of Saturn.
Let us see how Mars behaved last time it met Saturn opposition from Scorpio.. 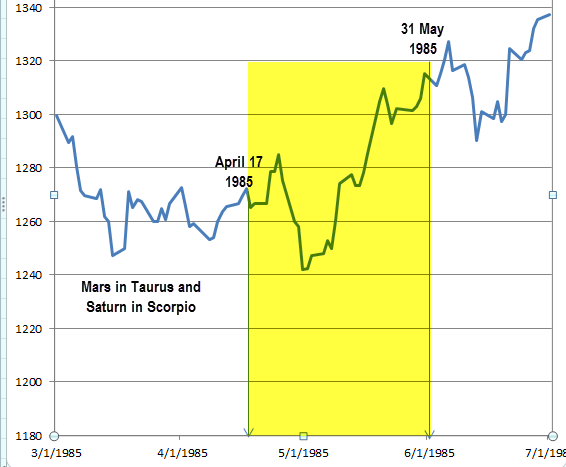 Since Mars is in Taurus for roughly 45 days, the first 0ne third when he traverses in Sun star, he depresses the market. And then there is a rebound...
What is the effect of Jupiter in Cancer on all these ? 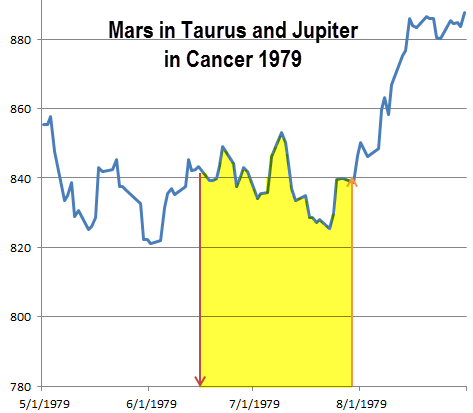 Common factor is an immediate uptrend and then a pronounced fall..This means markets could turn down sharply in the middle of May and recover only in June, when Mars gets ready to move into Gemini.
Now other aspects could add up and change the game a bit. So I expect a good move till May 12/13 2015.

I looked into the 1990s also, but Mars had become retrograde in Taurus and that complicated matters a little bit. Nevertheless, we notice that the final one third time of Mars in Taurus always points out to an uptrend.
So our conclusions?
Astro Wise, Markets could turn now, go up, have some hiccups towards the settlement, then go up till May 12/13 and then come down tumbling down the hill once more. Next recovery could then be in  beginning of June 2015.

Let us update our cycles and look at our waves... 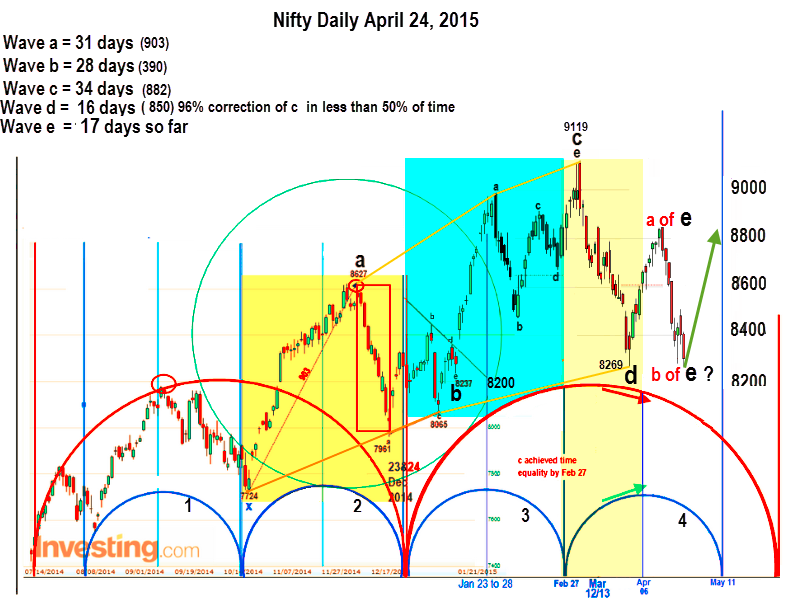 Observe the portion in turquoise colour and the mustard colored portion  both side of the point c..
We see tje cycle upto c was right translated and after c has been translating to the left. Left translating cycles are bearish.This means that the cycle after May 11, should see a good down move.
Why after May 11? Why not now?
This is because the blue cycle has been experiencing an inversion. Point d was a price bottom but blue cycle top. So for the inversion to be completed, we need a price top for a cycle bottom.And that is what I expect May 11 or thereabouts will bring in.Since the entire cycle is left translating, chances of prices piercing 8845 looks remote.
Further, the next blue cycle bottom  could see a significant bottom and the red cycle bottom could coincide with a bottom by June 2015! Iam running ahead of time..so let us wait and watch for these developments!

Let us look at our Neo waves...
1.If prices gap down from here, then we conclude that abcde had been an extracting triangle and the bull market is over.
2. Wave e had shown more weakness than expected. Its b leg, instead of being smaller and thrust upwards in its c leg, had considerably come down to negate the upmove by nearly 100%.So abc legs of wave e could form an irregular flat..If wave b ends here and wave c commences up, then it will be a Normal flat and the chances of retracing the entire down move from 8845 is bright. Now wave b could go down some more and then reverse. Still the flat will be valid, but then the bull would have become considerably weakened by then.
3. After wave e, the next leg is f down. Since e itself shows weakness, I expect wave f also to be stronger in its downward thrust.
4. For the time being we expect wave c of e to commence and move the market upwards in a counter trend movement.

A couple of Gunner charts to show the angles... 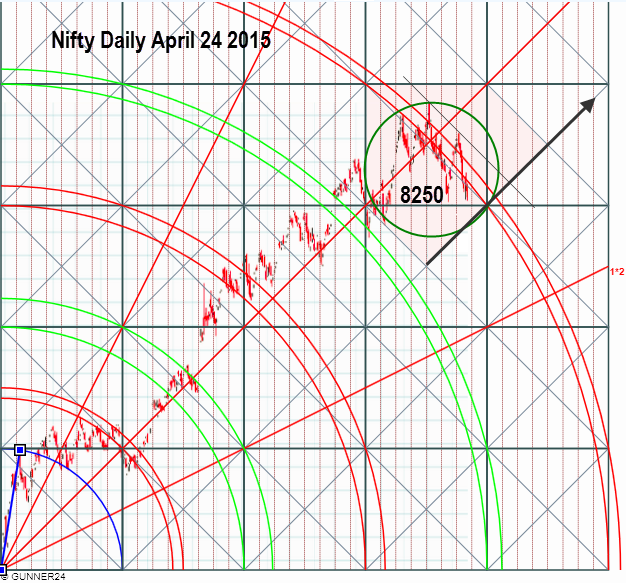 Nifty has slipped out of its 45 degree uptrend line and is encountering resistance at the red arc.If 8250 is pierced then all bull bets are off and Nifty could fall to the 1x2 line.Circle shows the points where Time and Price square up. 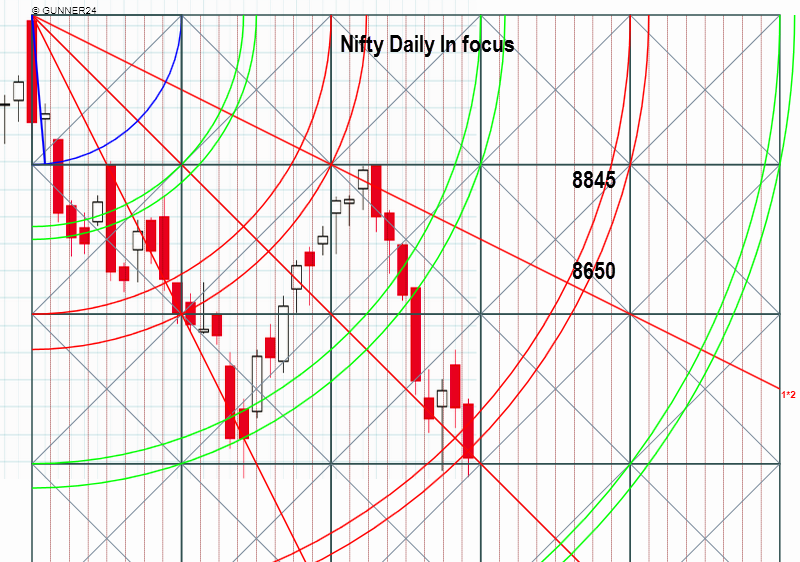 Applying angles on the down move from 9119, we see Nifty resting at a crucial red arc and a 45 degree parallel line.A reversal could take it to 8650 levels.
Summing up,
1. Down trend is dissipating, but has not yet shown reversals.
2. Could reverse and move up for a couple of days and then come down for the Settlement.Volatility could be quite high.
3. Risk averse traders may not take any positions this week. If the market improves considerably, then take a small long bet..we can build on it later..

Once again..just don't anticipate. Let the price tell you that it is ready to move in your favour..
Happy Trading!
Posted by Tekkiesuresh at 9:15:00 PM

Very well researched piece. Shows lot of hard work being put in. Keep it up

sir can you tell us the levels for nifty also?

Let us see the closing.The bull seems to be gasping for breath.

as said earlier the expiry seems to be at 8100.
guess you said it couple of weeks ago

I think the diametric is not on. With 8269 going and Nifty closing below it decisively, wave e was finished at 8845. If so, then the huge complex correction which we had seen from 5119, involving two x waves is over. We have completed a major top at 9119. We may have big rallies also hereafter, but they are going to be bear market rallies.One last confirmation is 8065.Every rise from here on should be used to get rid of investment positions.We will get good stocks much lower.

hi. My opinion is that wave-D is not complete yet. The one we thought was wave-E was just a X wave within wave-D. I think wave-D will complete @ 8000. This is because wave-A has to be most violent in a Triangle. If we consider the count where wave-E ended at 8845 then in that case wave-D will the most violent. Hence in my opinion that is not possible. Also what we previously thought was Wave-E looks like a monowave hence it suits the character of an X-wave. I have explained my point of view here
https://wavevision.wordpress.com/2015/04/27/nifty-8000-by-8th-may/

Triple combination is getting over Mahesh. Wave A was most violent, and it is an extracting triangle. Pattern implication of a Triple Combination is a severe 60% drop from the top.Best case scenario is the continuation of e as leg c upwards. But severity of the faster retracement casts doubts whether the triple combination is over.Nifty will still improve from here, but that may be the second leg of a new down turn from 8845 and not a continuation.

Our expectation of an up move in May, till 12th does not change. Chances of such an up move reaching good heights is looking remote as of now.Only the wave counts and their post implications change. After May 12, maybe we will witness a bigger drop and that maybe that is the time when global markets also join us. Right now, there is no sychronicity.,

One more point is that for an extracting Triangle Wave-D should be lower than Wave-B.

In an extracting triangle this is allowed. Triangles break rules often isn`t it? Also look at the channel formation from 5119. The entire triple combination was inside the channel as complex corrections are supposed to be. But with 8269 breaking the channel has been breached on the downside. Hence the doubt. If 8065 also goes, then we have the classic lower top lower bottom syndrome.

Agreed.We have only two more days for weekly closing.And it also is the settlement expiry.It is also the monthly closing.Last month low was 8269.Nifty should close above this low at least for some counter positivity to emerge.

Dear Mahesh, By nature, Triangles are not rule followers. Several exceptions are allowed in Neo waves. Wave b ended at 8237 and wave d at 8269. Nothing much to choose here. I am wary of placing a whoe pattern implication on this triangle crule. Here is what Neely had said about these new formations. "In the early 1990's, soon after the release of Mastering Elliott Wave, a host of new patterns began to emerge (Diametrics, Symmetricals, 3rd Extension Terminals, and oddly shaped Triangles). Prior to the 1990's, if you saw an expanding Triangle, wave-B was smaller in price than wave-D. When a contracting Triangle formed, wave-B was larger in price than wave-D.

At first I assumed these new Triangles were the result of Reverse Alternation between waves-B and D (a phenomenon previously only witnessed in Impulsive patterns between waves-2 and 4). While that was partially correct, over time it became apparent the situation was more complex. It took me a few years to fully understand, but as I studied more patterns, I was able to more logically categorize them.

With the addition of neutral Triangles I realized these patterns were not always expanding in one direction and contracting in the other, but sometimes "bulging" in the middle. That's when I realized the term "extracting" was not accurate enough to describe the phenomenon unfolding and, as a result, I stopped using the term."

Mind you Neo wave rules for all other categories of impulses and corrections are as strict as ever. Which is why I had concentrated on a pattern implication of 60% drop after a triple combination rather than continuation of the diametric.

great call sir retracement was completely out of expected.
high regards.
thanks

QuEeNhAvInA
Please read the summing up. Play the retracement vigilantly.

Analysis and your summarization has been well spelt out and it has been very helpful to me.

I sincerely appreciate your selfless efforts in educating a novice like me.

hello sir,
you cautioning us all was well taken into account and minimum quantity was traded.
I too share kannan srinavs' feeling

undoubtedly commendable effort .. even ur comments are so detailed ..

Hello sir
Can we create small long positions before the weekly closing tomorrow if the market hold these levels.
Regards

Why not? If Nifty improves from here.Keep yesterday' s close of 8239 as stop loss.Fed' statement would be construed as positive.So expect to see a relief rally in the US.Anyways we are expecting a rebound in May.