By Wednesday, April 15, last week, the correction which we were expecting had finally manifested. I hope the readers of this blog, had benefitted from the 9 day uptrend and have gone short after their trailing stop losses were taken out. We should now be comfortably short in Nifty.
Let us examine what is in store for Nifty in the coming week...
We shall examine some Momentum and Gann angle charts and then see how the astro indicators look like.
Let us start from the Weekly and go into smaller time frames. 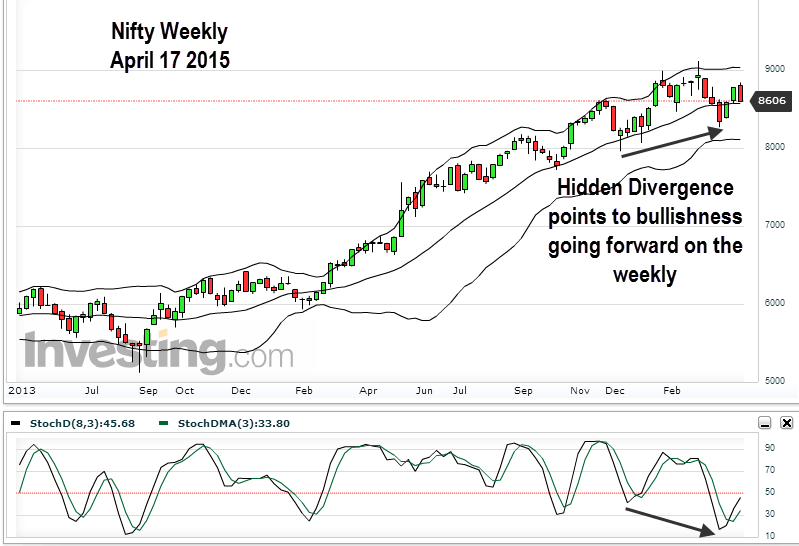 We see a pronounced hidden divergence on the weekly chart, pointing out to a bottom formation sometime midweek or early the week after next.( April 27 onwards). 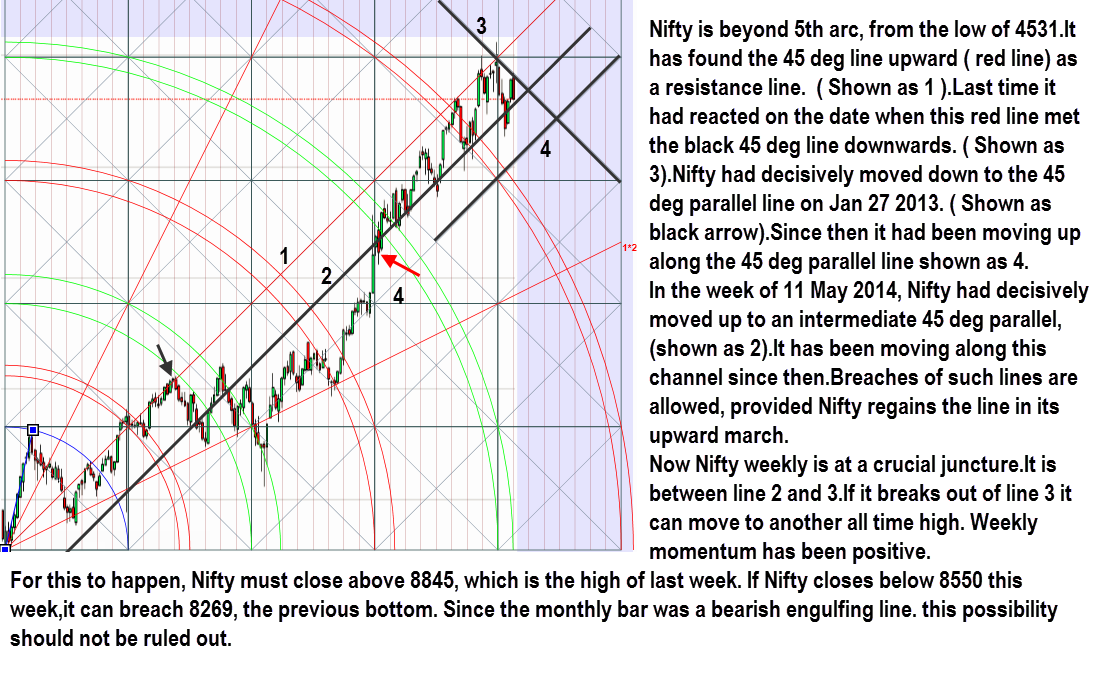 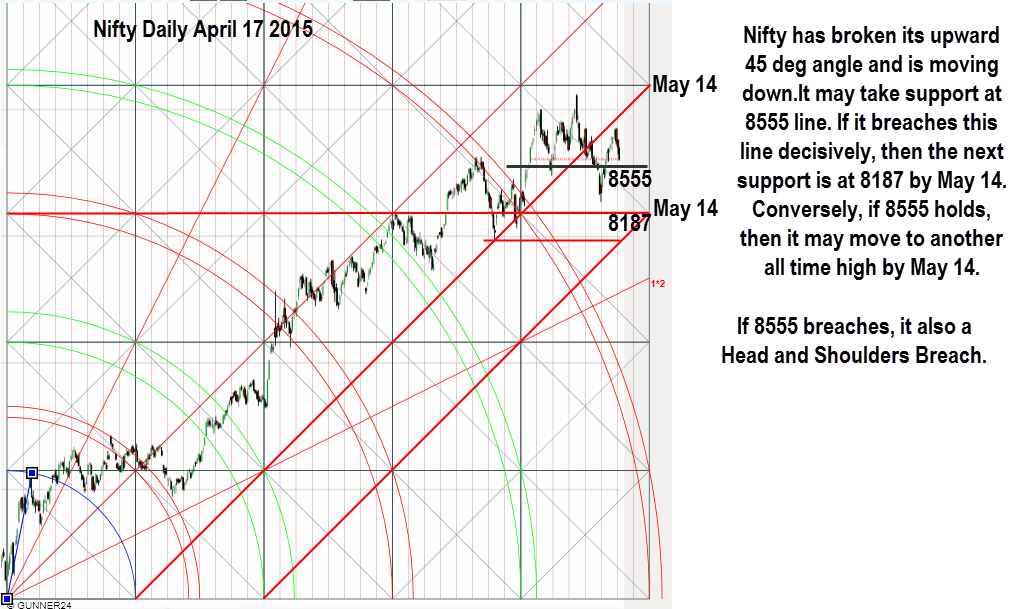 Daily indicates that we could see a  possible support at approx 8555, and then an upmove.We also see a dateline for the upmove or down move to get completed. 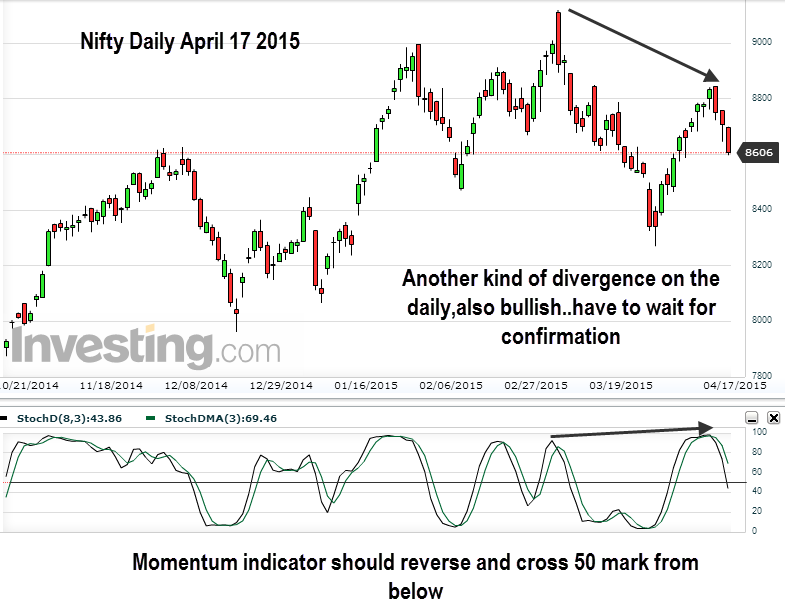 We see a different kind of divergence in operation, in daily chart and its momentum.This suggests that the down move may continue for  some  more days and then Nifty may turn up.`

We look at the hourly charts... 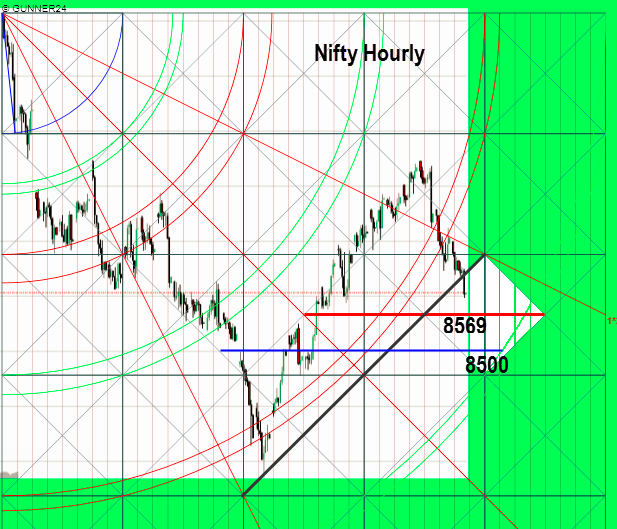 Here we see the 45 degree upward parallel line has been clearly breached.Two levels of supports are shown as 8569 and 8500. 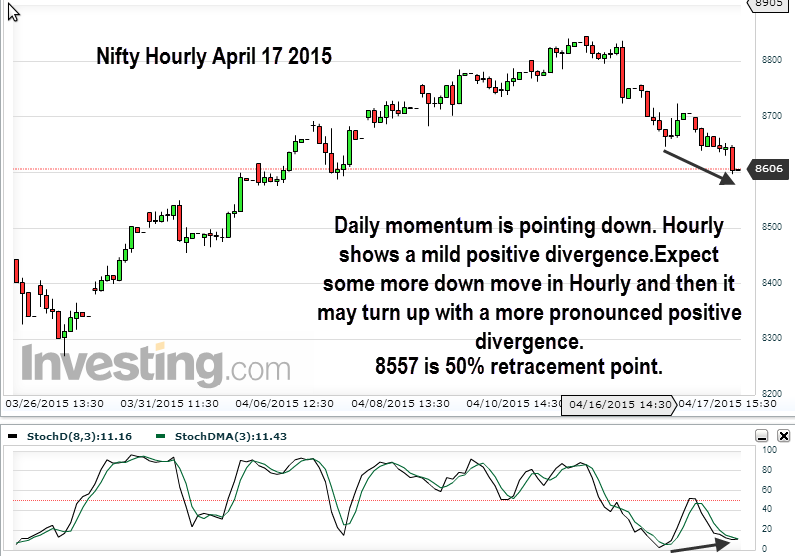 Here again we see positive divergence, but a mild one. So some more downside is expected before an upturn. Time limit..two to three days.

To recap, Continuing downside followed by a neutral weekly closing is a strong possibility. Powerful trough maybe anticipated closer to settlement.Chances of slippage to 8100 levels are also present.
Let us look at Neo waves and cycles for more confirmation.. 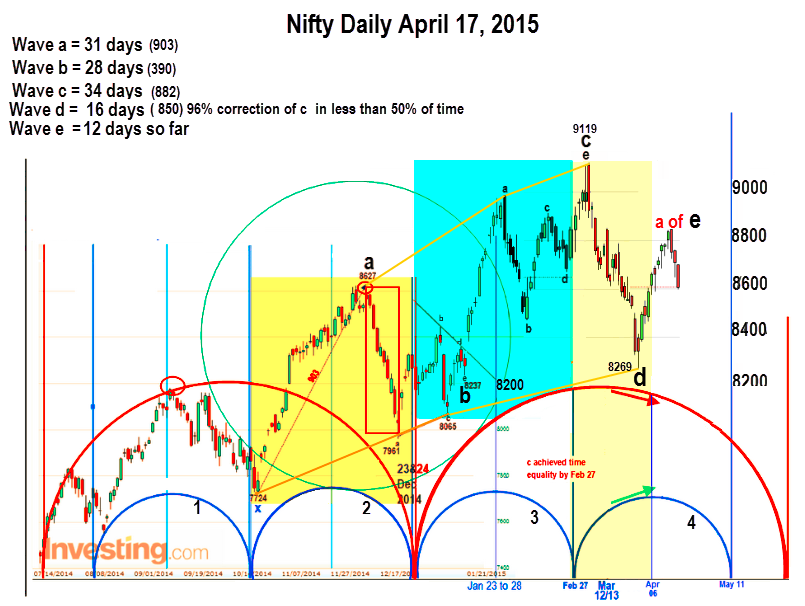 From 7724, which was the 2nd x point of complex correction, we are into the final diametric formation. We have completed waves, a,b, c and d. Currently we are in wave e.After wave e upwards, we will have wave f down and final wave g up, which will form a significant top.
We had initially assumed the down move from 9119 to 8269 as wave a of wave d. However, the subsequent upmove from 8269 to 8845 was more than 61.8% of the move from 9119 to 8269.
9119-8269 = 850
8845-8269 = 576
(576/850)*100 = 67.76%
This means the upmove from 8269 to 8845 so far can only be the next wave segment, that is wave e.
Shape of the diametric is that of a diamond and I have traced it through orange connector lines.The deduction from the shape is that wave e finally will be smaller than wave c in size. That means wave e may top out in the 9000 regions or thereabouts.In fact 80% level of wave c from 8269 comes to 8974.
In a diametric,wave d sometimes is the smallest wave. Oftentimes volatility increases in the remaining waves e,f and g.More so if it is closer to forming a significant top.
Coming back to wave e, then the current down move is wave b of d.50% of wave a of e is 8557 levels.Holding this level, wave c of e may open upwards.
Looking at the cycles, numbers 1,2,3 and 4 indicate half cycles of the inner blue cycle.We can see that the tops of cycles 1,2 and 3 corresponded to tops in Nifty.And the half cycles coincided with falls in Nifty.
However, the picture has changed for cycle 4.Here we find that the TOP OF CYCLE 4 IS COINCIDING WITH A BOTTOM IN NIFTY.This phenomenon of a cycle top coinciding with a market bottom or cycle bottom coinciding with a market top, is called inversion.Possibly this is caused because the blue cycle and the longer red cycle are falling apart in their rhythms. Also other invisible cycles are influencing the formation.
If so, when the blue cycle falls, we may expect Nifty to move up! Only after the current down move loses momentum.And a top could form in the vicinity of May 11th to 14th.
Looking at astro formations,
Negatives rule the roost.
Jupiter direct tends to trigger a market reaction first before it fires away. We are in the beginning of a market reaction.Just three days into it.
Venus Saturn opposition is also negative. This should take hold next week.
Pluto Retrograde is another negative formation. It should manifest negativity next week.
Any recovery seen next week should be used to sell.
Putting everything together,
1. The short term trend is down.
2.Next week could see two way movements.
3. Any rise maybe used to sell. Having said  Market could come down some more before a sustained upmove begins.
4. Expect a bottom late next week, but do not anticipate and place orders.
5. Negativity could spill over into the week after next,before a sustainable bottom is formed.
6. We see divergences, but the price should move in our direction before positions can be taken positively.
7. Trailing stop losses are a must, because volatility could increase from here on.

thanks for the update sir,
really helpful.
can we get the levels to cover our shorts as the fall has been one sided

QuEeNhAvInA, the trick is to NOT have any target. Go with the flow. Keep some 30 points trailing stop loss.Let Nifty go where she wants to go. If she turns back and claims your stop loss, just give it to her and say thanks for the balance profit. Once you have booked substantial profit, do not immediately get into any trade.Let couple of hours pass and then reassess the situation and do as per the prevailing trade conditions.

Still if you want an answer, look at 78.6% retracement of the previous upmove. It comes to 8392.Should hold there, if not, then it will be extremely bearish.

thanks for the update sir

hello sir,
the level given by you held,
nifty is also looking oversold at these levels how much bounce back do you expect.
regards.

By now you shd know that I don't go by levels! Wait to see if the reversal continues early tomorrow. If it does, go long with the current bottom as stop loss.

hello sir,
I agree levels don't count in the volatility.
thanks for the guidance.
thanks

hello sir,
concept of trailing stop losses has been understood completely.
thank you

Good! Iam happy for you! If you apply this consistently you will make tons of money! All other analysis is just to know the path ahead.They are like headlights.Taking positions is like driving and stoplosses are vital brakes.