Nifty opened the week on Monday, April 20 at 8619 and immediately started falling.Till it reached 8286 today before a short covering counter move pushed Nifty to close at  8430.This forms a hammer head pattern on the daily candle and that is a positive. This means that the down move gets slowed down a little for the time being.
Astro aspects look interesting.... 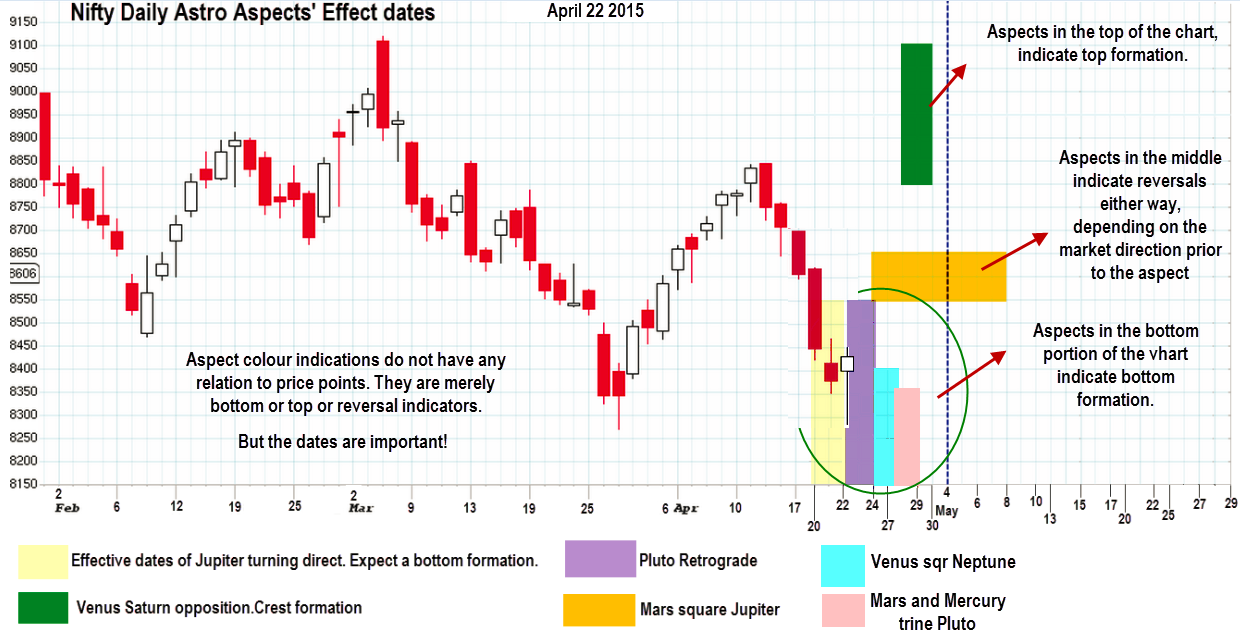 Four out of six aspects point to a trough formation between 22 to 27 of April 2015.Most important ones are Jupiter direct and Pluto retrograde. Both may cause a reversal which could gain considerable strength later on. 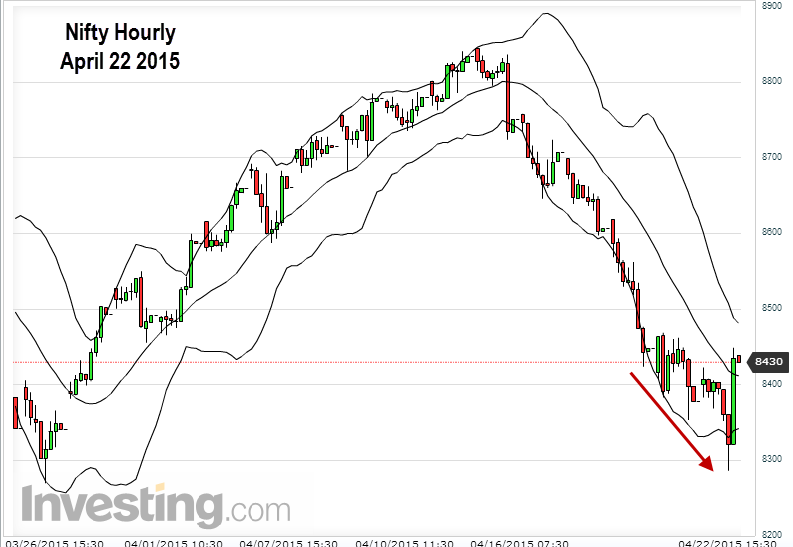 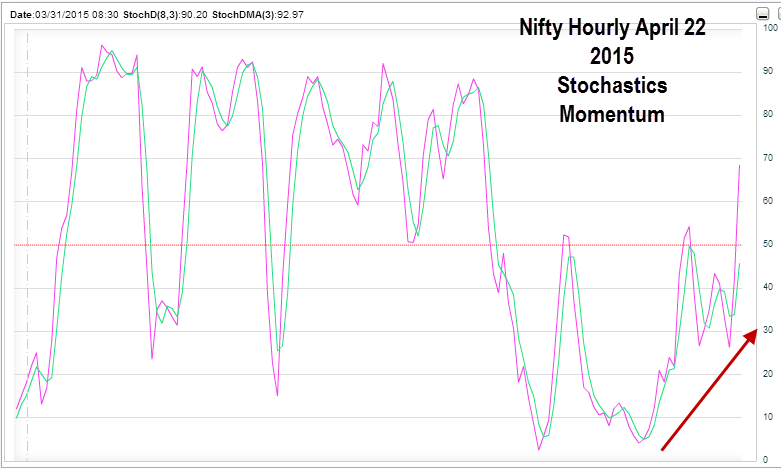 Hourly price movement has spiked downwards through the Lower BB. Generally this leads to a reversal, when confirmed by other indicators.Momentum shows positive divergence which has manifested as upward price movement. 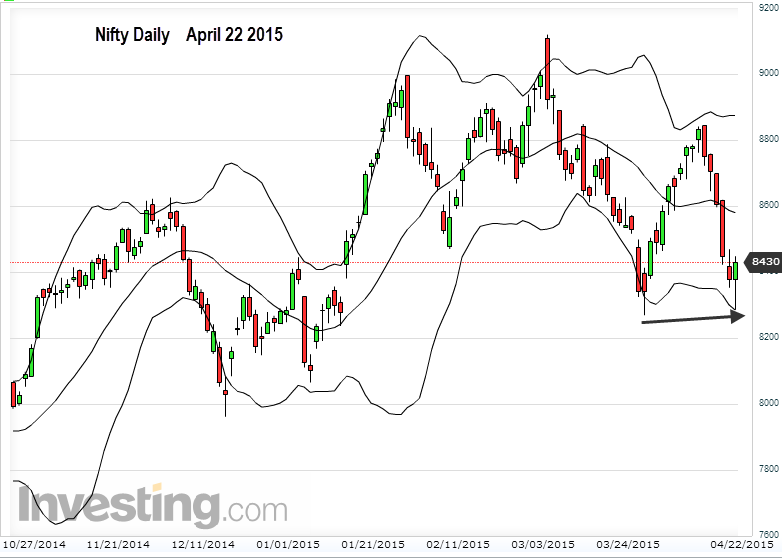 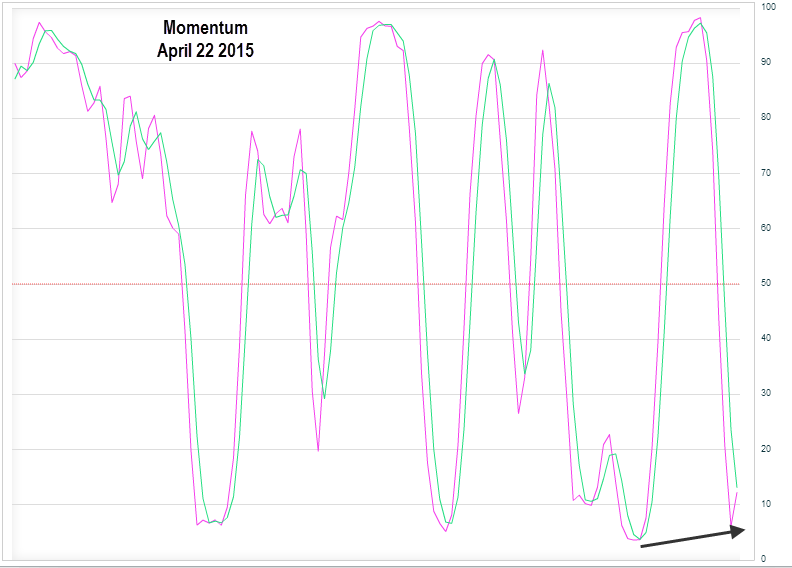 Clearly more follow up buying is required on the daily scale. 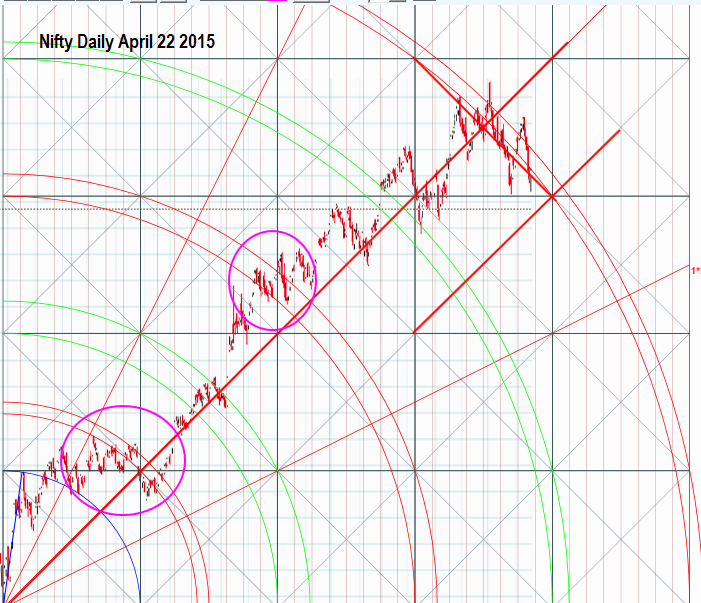 Nifty has slipped out of the Central 45 degree line and moving down along the red arc.Down move is also as per 45 degree lines. 45 degree parallel, below the main line offers support.Previous behaviors at red arcs have been highlighted.An energy jump is now required.
So we have covered our shorts today and are long in a tentative fashion...
Posted by Tekkiesuresh at 11:37:00 PM

Sir, what does it mean by troug formation? is nifty bottoming out or top formation?

Trough means bottom.Crest means top.If the bottom is indicated in one day then it will be a spike or v shaped bottom.If more than one day then it could be double or triple bottom.Those things maybe found from technicals.

thanks for the timely update sir
regards

Is it possible that we have completed wave F of the diamond diametric and are currently in wave G. The reason I am suspecting this is that the last fall has exceeded 78.6% on the downside. I am aware that diametrics is more about time equality, but even then I feel that we are on the last leg of the diametric pattern which could mean a pretty large upside from here as is evidenced by your analysis, mainly by the weekly oscillator.

Dear Wacky Punter,
Diamond shaped Diametrics generally have a smaller wave d and e f and g legs smaller than waves a b and c.d leg is usually the smallest.In butterfly shaped diametrics, e f and g will be expanding legs.Any which way time equality is of importance.Our current diametric has a 25 to 30 day trading length for each wave.That cannot be cut short so drastically.Remember, Neo wave rules are far stricter than classical Elliott wave principles.However, one possibility is that the current a b c d and e form only an extracting triangle and not a diametric at all.For this to happen, Nifty should breach 8269 decisively and close below it.Then the implication is that the bull market is over and we will have a medium term bear market lasting a long period and making lower tops and bottoms.I personally do not subscribe to this view yet.One more thing, after wave g this bull market will get over.This is because wave e could form an irregular flat with an upward bias, wave f is down and with WAVE G MAKING AN UP MOVE, WE MAY HAVE A MAJOR TOP.Remember the entire move from 5119 to this major top will be wave 1 of a much larger degree.Wave 2 down could last for several months and then we may see wave 3 up which could be pretty exciting.

Friday's action was disappointing for the bears : (
I believe we may have completed wave D as a Triangle only yesterday. It has taken 32 days as mandated by the larger pattern Diametric. I have posted my chart here https://wavevision.wordpress.com/2015/04/25/why-taking-so-long-to-breakout/

I will be looking for a high momentum breakout above 8350 to cover my shorts and go aggressively long..

It is possible Mahesh.Problem is then D would have taken nearly as long as A.On the other hand if we look at E forming an irregular flat with the current wave as wave b of E then we can allow for this b wave to even go below 8269 and still maintain the flat structure.If wave c begins immediately then it may go beyond 8845, closer to 8974.If Nifty weakens considerably then wave e ended as an extracting triangle and we conclude that the bull market is over.So the next leg holds the key.Iam favouring the irregular flat formation in wave e for the time being.Thanks for your views Mahesh.

Thanks Suresh, if irregular Flat is to form then wave-b of e would have to take atleast as much as wave-a, i.e 10 days. We have done 7 days so far. Another thing i noticed was Infosys bad result news failed to take nifty below 8269. I will try to make time later in the day to post a list of in-favour and against statements for the alternate count.

Also interesting to note that Bank Nifty did not make a new low and made a higher low instead. This could be telling something. Banks only broke down in the last hour and a half on Friday.

Sir, I have a doubt. If time equality is to be considered, then wave D should also equal the average of other waves i.e. around 27-30 days? In this case, it has been shown that wave D has lasted only for 16 days. Have you considered price equality in this case? Is considering price allowed in Neo Wave Diametrics? Request you to kindly pardon my ignorance.

isn't it a simple double bottom pattern where 8270 has hold twice and now we are headed for higher than 8845 atleast. ?

No, technically it's a triple bottom as we have bounced back on 27 March, 22 April and 24 April from this area. But one cannot rely on such simplistic analysis alone. If one had gone long on 22nd April with stop at the low made on that day then he would have been stopped out because on 24th we have breached that low. The you would say double pattern does not hold or why did you not book profits at 8500. But who new market would turn around at 8500?

Sureshji and Maheshji, below what level your bullish structure mentioned above will change.

Analyst,
Highest High 9119
Lower High 8845
First Bottom 8269
If 8269 breaks and Nifty closer below it, we will have the first Lower Bottom
After another high, lower than 8845, if Nifty closes below 8065, then we can confidently conclude that the bullish structure is over.Then it will be a series of lower tops and bottoms till the bearish energies are dissipated. Bearish moves tend to be faster and larger ( hence from a trader`s point of view, more profitable).From a wave perspective, such a down move will be powerful because it will represent the first wave down from a possible major top of 9119.

Dear Wacky Punter, I actually expect Bank Nifty to outshine Nifty this year! Having said that, Bank Nifty has already formed lower tops and lower bottoms.Remember, Bank Nifty formed a major top on January 28. March 04 was a lower top for Bank Nifty, compared to highest high for Nifty. If BN closes below 17500, we may short it mercilessly, because it will go down much lower.

Central wave is sometimes exempt based on the patterns the diametric is forming. Diametrics are actually back to back triangles and hence may not always follow rules. Most often wave D is the connector between triangles. You can have a contracting triangle connected to an expanding triangle connected by a small D. As more and more people take to Elliott wave analysis, markets are forming new pattern evolutions and the Diametric is just one of them.In the years to come we may see even more exotic wave patterns in the diametrics.If you wish to learn more, connect two different kinds of triangle formations and see if such patterns emerge in the market.

Hello sir,
Next week mercury transits and the week after that venus and mars too transit.
Can mars transit out of aries trigger a bearish sentiment ?
Please adv

It's not level but a convincing breakout of the triangle within NEXT 3 Days. See this https://wavevision.wordpress.com/2015/04/25/nifty-bullish-and-bearish-wavecounts/