In the week gone by, we saw Nifty break out of the uncertain triangle formation and move up..Technically we see the last leg c of c now unfolding. This week we may see completion of this c leg.
Let us examine in more details... 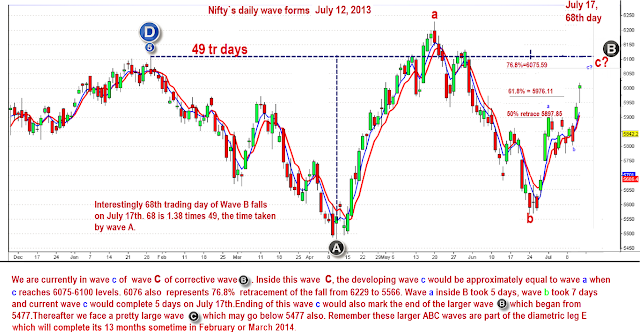 Last week we were watching to see whether Nifty would resist at 61.8%. Nifty with a gap up climbed above this level, and is now within striking distance of 76.8% retracement levels.Since we had seen a Limiting triangle formation last week, the expected target of  break out is 75% of the largest wave inside the triangle. Since a was the largest wave and it measured 335 points, our limiting triangle target is around 6056, which is quite close to the 76.8% retracement levels also.
Timewise wave a had taken 5 days, wave b 7 days and the developing wave c will complete 5 days on July 17. 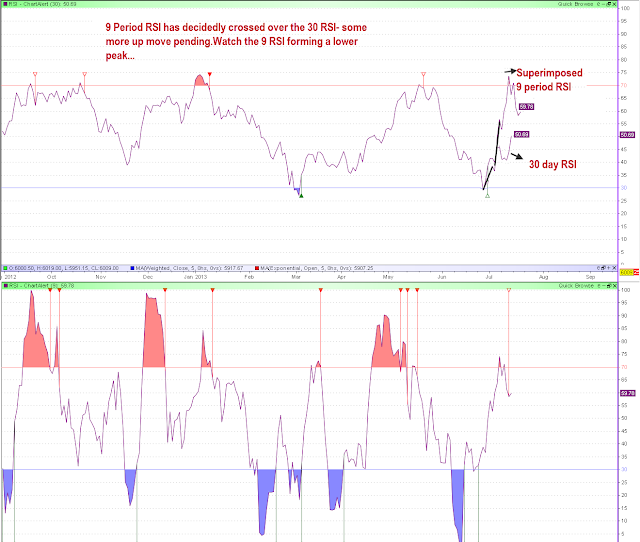 If we examine the RSIs we see that the 9 day RSI has substantially moved up over the 30 day RSI. This may be taken as a bullish development. Now of interest is the subsequent development of 30 RSI and whether the 9 period RSI will make a secondary peak.That could signify a crest. 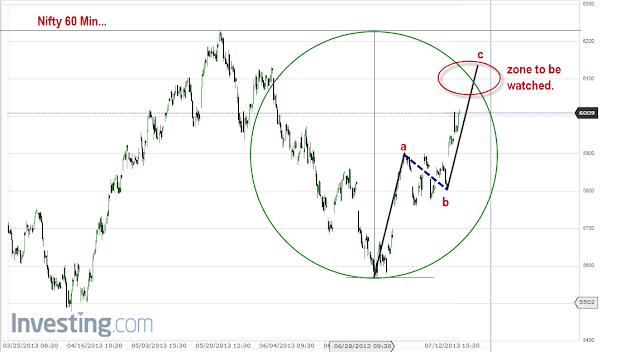 In the 60 min chart also we see levels of 6050 to 6100 are quite significant. If Nifty vaults over these, then we are in powerful up market. Short term cycle suggests that the uptrend may be over around 6100 levels.

In the post,
http://niftyastrotechnicals.blogspot.in/2013/07/astro-technicals-saturn-2012-to-4.html
where we had discussed reversals because of Saturn direct station, we had expected a turn around July 17, which is midweek currently.This also could get distorted by a few days, because of the
approaching grand trine of Jupiter-Neptune-Saturn.Mid period of the current Venus Antara Jupiter Sookshma also falls sometime around July 22. So the period July 17 to 22 make be watched for a crest formation.

If you had regularly followed the posts, we had dealt elaborately at different times in the past, on these long term formations.
1.On May 30, 2013, Jupiter enters Gemini. We had postulated that the long term uptrend is in danger and that for the next one year, we will see dual trend with a downward bias.This means that after the crest formation immediately Nifty may go down below 5477 levels also.
2.Saturn Neptune Trine:May 12 to July 27, 2013.While the central time band is June 20, 2013, we are seeing the positive distortion effects of Jupiter also joining the trine. Which means the central time band gets shifted closer to the Jupiter-Neptune-Saturn trine. This is around July 17. So between July 17 to 27, this trine should take its effect. Already we find euphoric reactions to developments such as Infosys results.We also note that crest formations due to this combination has a long term effect of one to two years.
3.Jupiter square Uranus square Pluto:August 06, 2013:We saw the waxing square of Uranus and Pluto was in vogue for 72 days from April 18 to June 28.Central time band for this formation was May 20 to 24. Nifty had made a high of 6229.45 on May 20 which remains the highest crest this year so far.When Jupiter joins the square, it could lead to bankruptcy issues around the world which could be the cause of the expected downtrend.
So in a nutsheel, we currently play out the positiveness caused by the Grand Trine and then wait for negativity to set in, when Pluto,Uranus and Jupiter get involved in  a square formation.We continue to hold Nifty and at the first hint of trouble in Nifty, we sell off and switch to shorts later, once the Grand Trine is over.