Last week we were expecting c wave to complete. It had completed 7 days by June 19. 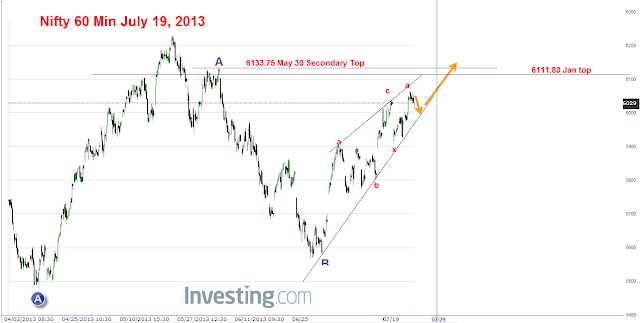 What we now see, is that the abc correction by not breaking the trendline drawn, had become an x wave and so we have another abc correction unfolding.We had completed a and we are currently in the corrective mode, b. We still have one large c up move way to So we continue to hold Nifty buy positions till we see a decisive break down below the 0- b trendline.

Let us look at the cycles... 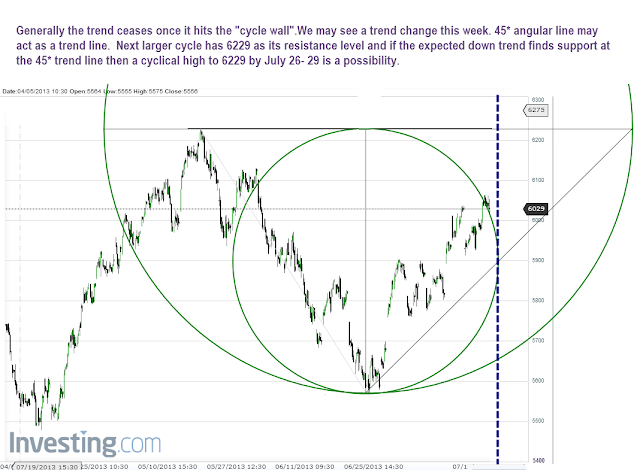 We see a possibility of a reaction, a buy on dips kind of reaction which could move the market further higher.In other words the c wave could be a strong one coming before the final fizzle takes place.

We have several significant planetary aspects this week:
1. Mercury turns direct.Uranus has turned retrograde on July 17th.Both planets came close to forming a square and are now moving away from each other.
2.Mars conjuncts Jupiter.Rahu is trine Mercury and the Grand trine involving Jupiter, Saturn, Neptune and Mars is still in vogue.
3. Rahu moves to Rahu star. We already have Mars, Mercury, Jupiter and Saturn in Rahu stars.
4. Rahu is also the cuspal star lord for 3, 7 and 11th cusps.
5.July 22nd is a Full Moon, Moon Perigee and a Minimum Declination day.
6. July 23rd is a Maximum Latitude Day.
7. By 25th July, Venus will oppose Neptune and Mars will oppose Pluto.
8.By July 26th, Sun will square Saturn

.
Additionally we are in the middle time period of Venus Antara Saturn Sookshma.
So what do we understand from all this?

We see that all Saturn Sookshma periods had a small crest forming. That is the first understanding. Since the Grand trine is still in vogue the reaction of two or three days will reverse once again into a bigger up move.This could last into the week and by 26/ 29, we could have a bigger down turn coming.
Will it mean that the prices will fall into sub 5400 yet?
My take is not yet.
Reason is because of the following observations.

Nifty had never reacted significantly ( a sustained downtrend) when fast moving planets were moving in the houses of Cancer, Leo and Virgo.These three houses offer a sort of continuation of the existing trend. So the next real down trend could commence only when Venus conjuncts Saturn and Rahu in Libra followed by Sun conjunction with Saturn and Rahu.These are slated to happen post September 17, 2013.
So, even with dips, Nifty may continue to rise till September 17th ...

Putting it all together, Nifty may first go up and then react. On July 29, a bigger reaction could set in. Even that could be shrugged off and Nifty may move forward to its tryst of Saturn and Rahu. That rise could be the result of the Grand Trine.After which the Jupiter-Pluto-Uranus squares will inject reality into markets.
With so much aspects and signatures, we will  closely follow the developments on  a day to day basis.

Happy and careful trading.
Posted by Tekkiesuresh at 2:35:00 AM

Good one
You seem to improve after criticism

That was uncharitable.That connotes that unless Iam criticised I do not give good work.Maybe Iam foolish to lend myself open like this.Anyway thank you for your comments.
Suresht

You are not foolish suresh, you are doing great work.

the 0-b trendline will probably be taken out this week. Good distribution last 2 weeks.Expecting some action on expiry or on fri. The levels you mentioned,6111 and 6133 are probably the levels to watch for but i'll be watching the 0-b trendline. Anways take it easy buddy.Criticism or no criticism ,you'll have to go about your job like you always do.

GE Suresh Ji, the people like him are nothing but this is their work to do nothing
but finding mistakes in everyone because they are frustrated with this market.

So please do continue your great work.
Actually this is their aim to stop your work.

tekkie,today spot low has hit the 0-b trendline and bounced. 6022. I think below that we can see a good fall.its just a matter of time according to me. In the next 3 sessions should break and close below that.

Now a close below 6020 will be the final nail in the coffin for the bulls.Whats your view tekkie?