With several technical and astro aspects crowding in, we are in for quite an interesting time trading wise for the rest of July 2013.
Let us look at the technicals first...

Corrective wave A had taken 49 trading days. Wave B has so far taken 61 trading days. Currently we are in the upward c leg  of wave B.
Nifty had reached 5897 levels, which represent 50% retracement, promptly reacted and is now testing those levels again. If it crosses this level on Monday, July 08, then it should quickly reach 5975 levels which represent 61.8% retracement. Nifty is likely to find big resistance here.
Timewise 68 trading days represent 1.38 times 49, the number of days taken by wave A.This falls on July 17. This is a time zone to watch out in the medium term.

If we look at the interplay between 9 and 30 day RSI in daily and weekly time frames, we find that 9 RSI has crossed the 30 RSI upwards in the daily and in the weekly, it is yet to do so.So we expect continuation of bullishness but with caution.Things could turn any time.
Here is a chart on Gann Angles of Nifty 30 Min.. 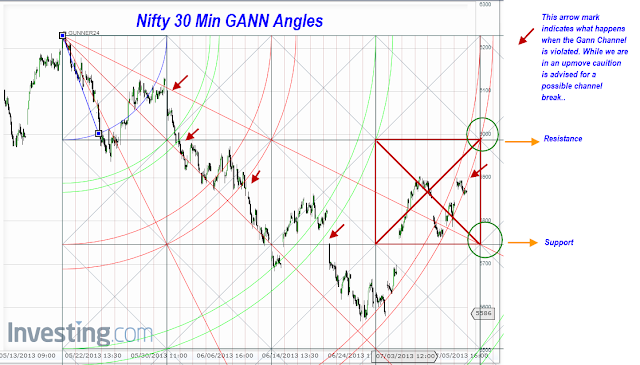 So technically we are bullish, but are more like the proverbial cat which is expecting a half brick thrown at it..extremely vigilant...
Now, let us see what our Astro Indicators say...

Nifty should improve for the first two days. 09th July after 11 am, we may see a change in the up trend.By weekend, a short term negative trend may be visible.
Let us check out our retro and sookshma charts.. 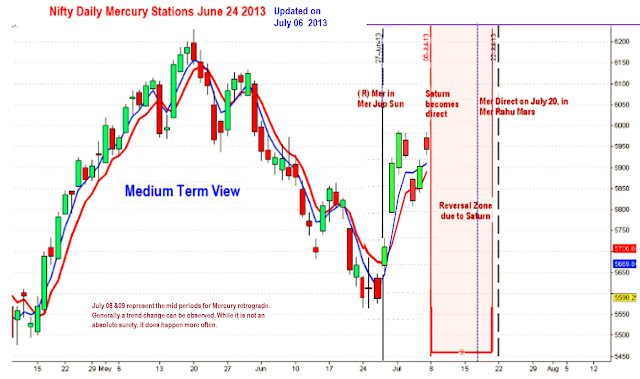 As mentioned in the chart, the mip period of Mercury retrograde, often produce a reversal of short term trend. So July 9th could be a crest day.

As expected, after forming a low in Jupiter Sookshma, Nifty is moving up. We may expect a crest formation in Saturn Sookshma.

Putting everything together, we may expect, Nifty to move up from these levels, for a couple of days, and then go sideways for a day before and then start coming down..
Remember Kala Sarpa? The moves could be lightning quick, up or down?
Stop loss and waiting for Nifty to confirm its direction is a must.