All stock markets are influenced by International Fund Flows. IFFs are of course subject to planetary influences. The one influence which has international appeal are astro aspects. Among the markets there maybe less flow or more flow depending on outlooks for each country by IFFs. In other words, amplitudes may differ but turn dates tend to be similar.
There again, there maybe differences of a few days for the same kind of astro aspects. Example: DAX bottomed on March 18 whereas Dow and Nifty bottomed on March 23, 2020.Dow and Dax peaked on April 29, whereas we did it on April 30.Dow and Dax bottomed on May 14th whereas Nifty did it on May 18th.
Looking at amplitudes, 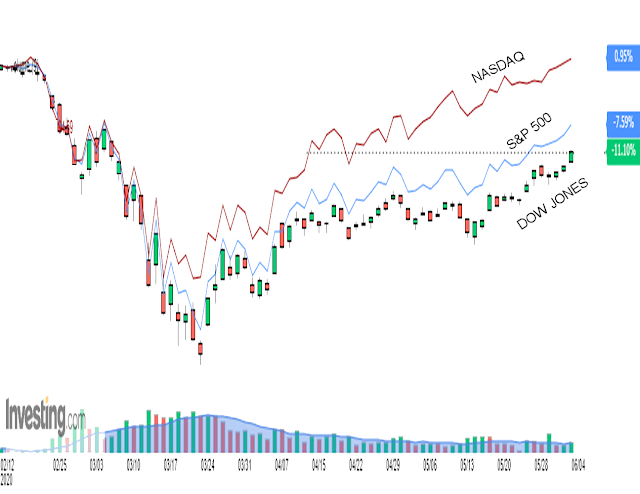 The Dow is the least performer among the top three US Indices.While NASDAQ is primarily Domestic Institutions, S&P is essentially retail and the DOW is International Funds.
This only means there is still some reluctance from International Funds into Dow and this could be an important consideration going forward.

Fibo time extensions of various lows of DOW point out June 08 and 09 to be important dates.
If the Retro Venus Sqr Mars right now with a Penumbral Lunar Eclipse of June 05, does not slow down the market, then it can only be slowed down by Sun square Mars of June 08-10.
As mentioned in previous blogs, we still continue to believe in one more leg up in June.
For that we need some moderation in the bullishness now...
With Kaala Sarpa Dosha out of the way, issues other than Corona have started to come afore..We continue to remember that we are still under the influence of Saturn-Pluto-Jupiter conjunctions.
Nifty will continue to follow the mother market..
Posted by Tekkiesuresh at 11:49:00 AM