In our observations last week, we had expected Nifty to move up in the week of June 22 to 26.We had also observed that the up-move is getting stretched.Since Mercury retrograde period was operational we had decided to keep booking profits and guard against false moves.
From 10277, Nifty had moved up to 10533 before declining and closing the week at 10383.
Interestingly, there has been an Inter-market Divergence between Nifty and the Dow as seen from the bottom of May 18 onwards: 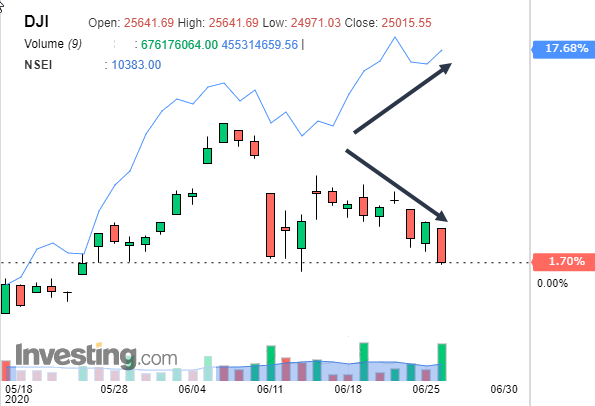 Nifty has advanced nearly 16% to the Dow.
FII flows has been good enough. One reason could be the Dollar weakness from 103 to 97. 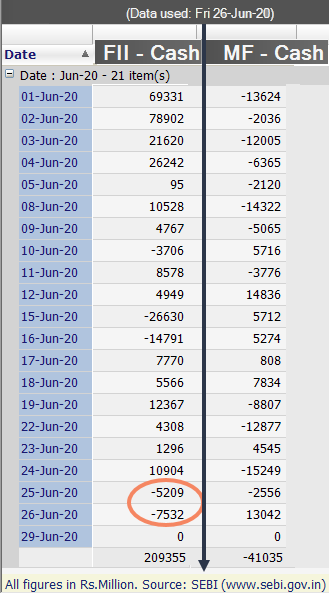 . After a sustained bout of buying between June 17 and 24, we see some selling only on the last two days of previous week, on June 25 and 26.
So how does the coming week look like?
To arrive at a proper conclusion, let us look at some long term cycles.

Nifty has been guided by 4 year cycles which have sometimes expanded to 60 months or contracted to just 19 months.

We are just 3 months into the new cycle and so on a monthly cycle level, there is some more bullishness left.As mentioned on the chart, the current cycle may go up to September 2020 with a top anywhere between July and September 2020. 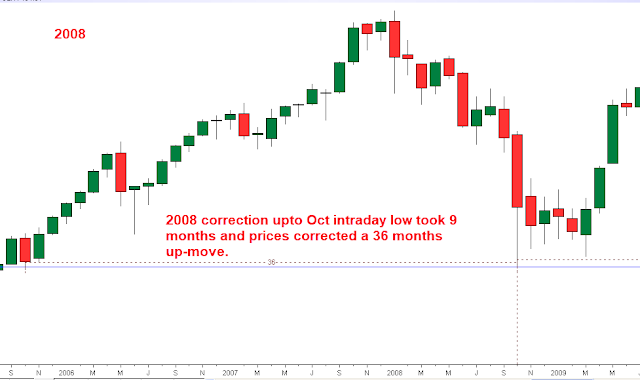 If we look at the previous severe decline in prices, in 2008, a 36 month up move was corrected in 9 months.

In 2020, price decline of just two months corrected prices seen 46 months ago.So the price decline justifies a significant bottom categorization. In other words, this 2020 bottom may stay put for quite a while.

So while the monthly cycle looks bullish, the weekly looks like a correction is in the offing.With 5 weeks of upmove already completed, a breather is in fact quite healthy.

On the daily cycle levels also we look to see a correction into July 06 to 09.
Several astro aspects are also coming into play right now.
Venus has turned Direct and Mercury completes its mid point of retrograde on June 30 /July 01.Mars is aspected by Retrograde Saturn and Jupiter moves back into Sagittarius.
After a dip this week, Nifty could attempt to move up to 10500 and then start a bigger correction.

Classical patterns and Bearish Divergence on RSI also point out the same...

Look to 10030 levels first and then 9900 levels.
Our expectation is that post a good correction Nifty is poised  to move higher in July 2020.

God Bless and stay safe!
Posted by Tekkiesuresh at 8:26:00 PM