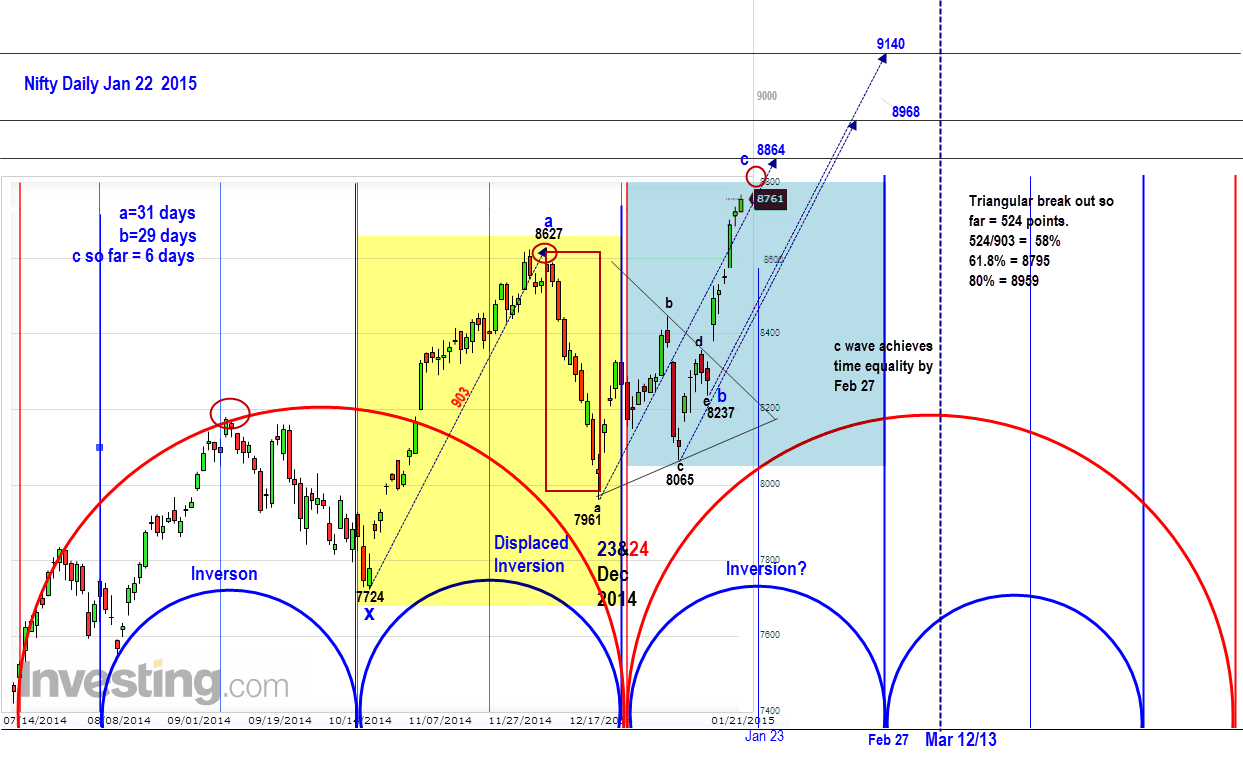 Currently c wave is on and is confirmed by new all time high. Targets are projected by arrows. Jan 23 happens to be the 23 day cycle culmination. We have seen inversions ( instead of a low, a high is formed) with 23 day cycles in the past. Instances are circled.
Question is will an inversion happen now?
Chances are we may have a displaced inversion next week. This means the current up leg is maturing fast and the risk reward ratio is not in favour of longs anymore. Most of the anticipated news are  out.
Also every time an inversion happens, then the next cycle will see a low.
Since we are in c wave, that low could be a higher low, of course.
Last 46 day cycle was right translated as shown in the yellow high light. We had mentioned a month ago that the next cycle could be bullish. And so it is.
c way has another 25 days to go. Likely time equality is Feb 27, which coincides with a 46 cycle culmination.
b wave was a limiting horizontal triangle, for which 61.8% ration of break out is important. Those levels are indicated. Rest analysis by weekend.
Net sum up: Buy on dips.
Posted by Tekkiesuresh at 8:47:00 AM

you mentioned previously that 23rd january will be a new low

where is your astrology gone?

Dear Hiren,
I have never claimed to be infallible. I have never met ant analyst or astro specialist who was 100% correct. I have never changed my view in the sense you are indicating.It was particularly heartening to note that you had forgotten to mention the number of times I was right. I had always maintained that wave c upwards, will happen after wave b. I had been wrong in my understanding of where wave b ends. Since Iam inviting wrath from people like you, I see no point in wasting so much of my time in posting all these charts and calculations. So thank you for your comments. For 23 years I had kept my learning to myself. Only in the last two years, have I started sharing my learnings and mistakes through these blog posts.So let me keep my own counsel. At least I will be spared such remarks.
Thank you again for being part of this journey.

Anyways, I will post my understanding for your previous two questions..

Sir after having gone through u posts I think the confusion was inability to prepare in case of being wrong so I request next time to keep an alternating view. Markets like life are humbling they keep us down to earth and in life there will be critics who will question us I felt that there was not an alternate view which can lead to confusion in case analysis goes wrong.

I have been trading in nifty options for the last many years and have mostly lost money. For the last many years, I have been searching on net regarding astrological connections to stock market. MVA and mmacycles impressed me to some extent but none found to be perfect. Sometimes it was found to be correct for Europe and USA but not for India and vice versa. Time to time, I stopped trading because of my habit of taking risks and trying to make my small amount into many times bigger and that too in a short span, suffered losses.
Last month when I first saw this blog, I was impressed a lot as I saw Sureshji sweating so much in drawing conclusions on the basis of astrological and technical aspects. Well I jumped to trading again and...... Yeah lost again expecting a sudden tumbling of market in this week by 23rd.
However, I must admire Sureshji for his efforts and time taking research both on astrological and technical. Even after losing once again, I’ve no complaints and am so much anxious and awaiting for his next findings.
Sureshji is spending his so much of precious time in tedious astrological research work and shares on his blog without any personal gains. So we have no right to be bitter to him. He is just sharing his views and not forcing anyone to follow, (that too without any monetary interest from others). It is not that only he was forecasting the same astrological prediction on stock market, if you go on net, you will find that all the predictions were on the same line. Rather blame astrology or our too much relying on it.
So, I would request humbly to all not to blame him and I’m saying so after losing a comparatively a very big amount this time just because of relying too much on astrological predictions after August 2009.
Sureshji, you have created so much of curiosity that I will be missing so much, if you stop sharing your views on the blog and I know you too have a setback but am sure that you will continue your astro-technical research with even more zest and zeal. May be some day you find even more accurate way of predicting. Requesting once again to share your views.
Regards,
Deepak Sharma

Deepakji, I understand u feelings but at the same time it's important that analysis are provided in the right framework otherwise there will be many more deepakji who will loose money.so I request sureshji to come with right framework before giving analysis. They must be in proper calls in terms of entry exit and stops which are quantifiable failing which it a mere educative research which has no value.

Suresh,
it will be a grave mistake to pay any attention to comments of such people.
Such mismomers exist everywhere who are ready to comment and pounce anytime.
instead you should concentrate on the people who benefit and learn by this noble work of yours.
And I am sure there will be many.
You should concentrate on your work and do what u know in ur heart to be right.
Avoid these petty distractions.
continue ur good work.
ur doing gr8. I've been one of ur oldest followers. N this is one of the best blogs I've come across. No doubt about that.

Hi Suresh,
Your astrological analysis was correct. Even the BSE natal chart has significant afflictions. The natal north and south nodes have formed very ominous conjunction and square aspects with Uranus and Pluto. In such instances the markets correct. However with Uranus and Pluto in the picture things turn very unexpected. That can be understood with the imbalance in the currency market.Its beena while we ave seen Gold and Dollar rally simultaneously.

Problem is u cannot be 100% correct with mundane astrology.

Mr. Solanki,
I agree to a certain extent but being in the market is also a reality that money can be made or lost on ones analysis that is why SEBI has put restriction on financial analysis and in reality I am not blaming Sureshji but if you objectively go through his blog you see there is a confusion where his long term view was bullish but his view till 23 January was extremely bearish. Educational purpose needs to be corrected where it goes wrong and critics acknowledgement is another step for success. All I have said proper calls are given it just removes difficulties to as who is trading on these recommendations.

Want to put things under proper perspective. Kindly take the same in the right spirits. I am just speaking aloud my inner voice.

I have been following Sri Sureshji for the past two years or even more. In totality he has been so accurate and to admit the fact, there has been none who has come even close to Sri Sureshji in terms of accuracy and trajectory. Look at his past records and you will know by yourself. I can give you many instances to prove my point in the past. Apart from Nifty his scrip specific analysis has been on dot too. The recent examples are Canana bank Biocon.

It is really wrong to accuse a person like you have done. He is true and sincere and his standard are of the highest order, and the one who closely follows him will understand him better. He has helped me to understand markets better and he has changed my thinking, the way I looked at the markets. Kudos to him.

To end this unsolicited message to you, Do not be little once efforts and I know the kind of time and efforts he has done in the past is really praise worthy and also admit we seek his guidance only because we are short of knowledge ( no knowledge) and experience.

Similar to the goal keeper analogy, what shines out bright almost always is the fact that a goal was missed but the blatant shoots of the goal keeper having saved so many goals becomes submerged like the titanic.

Dear everybody, let us keep in mind that sureshji has not invited us to follow him, we are following him because we find his prediction to the mark, moreover blaming sombody else for our own failures will not take us anywhwere.. No astologer/technical analyst is 100% correct.

I would like to add one more point on this wall. Pl refer to any site (technical/astrological) available on the internet, everybody had a bearish view and we small traders got trapped, however I have borne limited losses because I followed technical support and resistance mentioned in his charts, therefore request everybody to not play the blame game.

Suresh.. please do not stop posts.... your inputs are valuable... sincere request

Sureshji , we understand your feelings and as seen by many bloggers I sincerely request you to write u views for educational purposes as markets are a place where only God can be perfect.

Views can be right or wrong, so no need to comment on that. We like your thesis which help us in better analysis. Hope all understand this. Appreciate your inputs sureshji.
Can you please post an update on your view. Thanks in advance.

Views can be right or wrong, so no need to comment on that. We like your thesis which help us in better analysis. Hope all understand this. Appreciate your inputs sureshji.
Can you please post an update on your view. Thanks in advance.

Dear Analyst, I symapathize with Sureshji but there has to be continuation of your analysis weather right or wrong and your next analysis has to start with your previous analysis conclusion which was not the case with Sureshji and that is what might have upset Hiren .As market players everyone is not 100 percent correct but yes course correction is a must fodder for improvement.

I request people on the wall not to force Sureshji to air his views because as analyst when u are not going right there is a breathing space required so he can calmly reflects on his thoughts
Please give Sureshji some space so he is not under any pressure to air his views.

Dear Niftybaba, if you feel you can perform better than please make your own blog and prove yourself. Dont waste your efforts here. You are not invited. Thanks

so called analyst please do be offensive writing a blog does not prove anything please do not use other people opinion if u don't have u knowledge. You are no one to invite me please be to yourself.

Only fools follow blindly and whine like a pig when they lose. Stop whining..you've already created huge number of politicians and godmen. This is a place where knowledge is shared and socialized.. not for fools.

Good morning surehji,
Yes this wave is fast maturing and it may reach 9100 to 9439 by Feb end or march first week

Dear all,
Iam not in station and shall be returning only today. I shall post my views on Wednesday.

thanks for the update Sureshji

such brick bats will make you stronger and if we take it positively , such critics make us more vigilant in studies and that helps ....