A very happy, wonderful and prosperous New Year to all my friends!
Let the markets oblige you in the way you dream them to oblige you and let your cash registers ring throughout the year!
I had taken a much needed break, with my family and took my mind off from work and trades, for a while.
Now Iam back, in time to welcome the New Year and let us see what the markets have in store for us..
After nine straight
months of uptrend, Nifty formed a large red candle in December 2014. 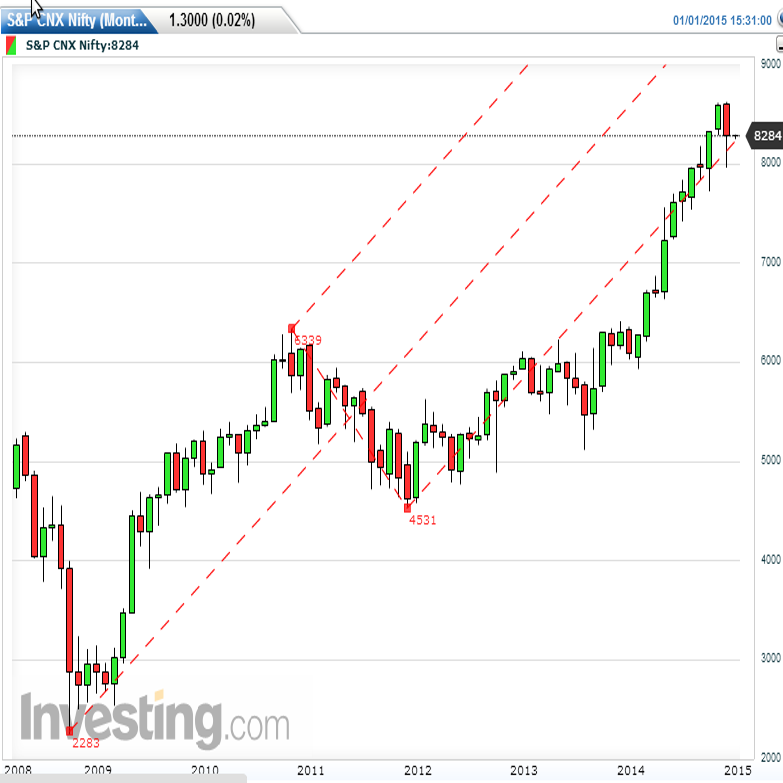 As the fork indicates, if Nifty closes below the lower handle in January, then we can be reasonably sure that this uptrend is coming to an end for some time to come.Investors should take note of this formation and if this happens, then it is time to get out of the market and into cash... 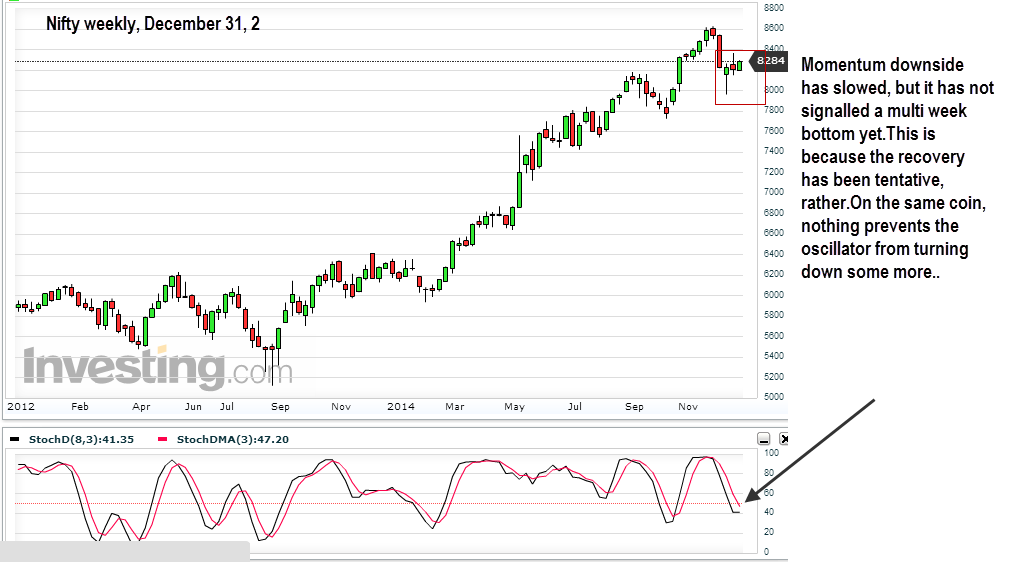 Reading both the charts together, we conclude that there is some more up move pending, but that could likely be weak and could culminate in a prolonged down move.

Coming to the dailies,here is the cycles chart.The last cycle has bottomed out on December 26th and the next cycle has begun.Momentum is always less when a cycle begins, and we are seeing that in the market.Also this time round both the 23 day as well as the 108 day had come together and the resultant vector addition of energies could be the reason for a big downfall from 8627.
The current cycle exhibits a fractal resemblance to a period in the past...The connections and the projection to a new low before January 22, needs to be keenly watched. 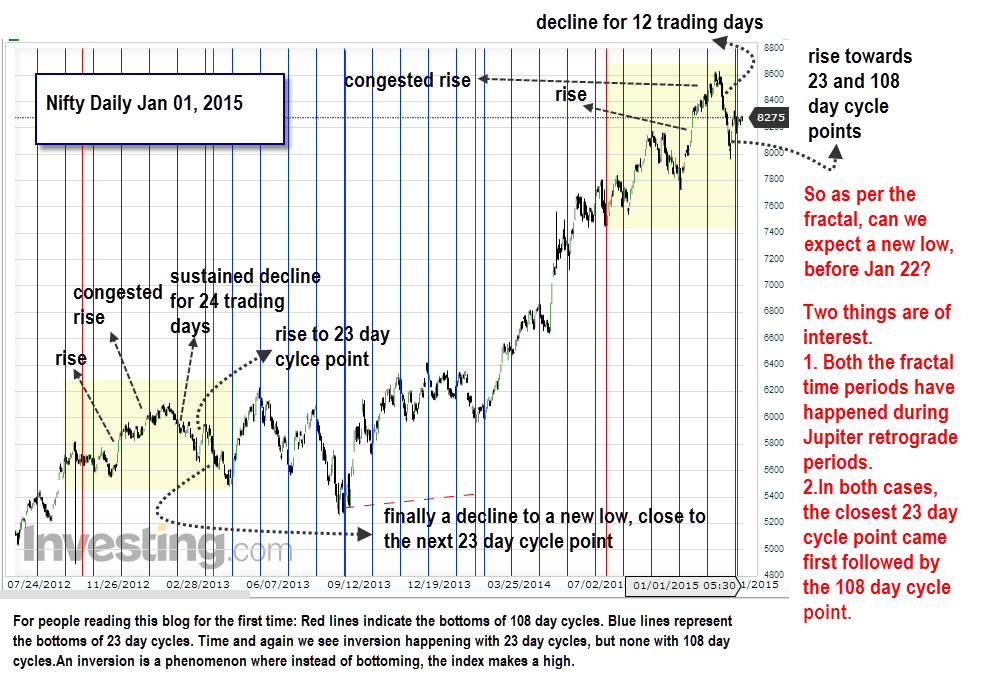 Looking at the angles, 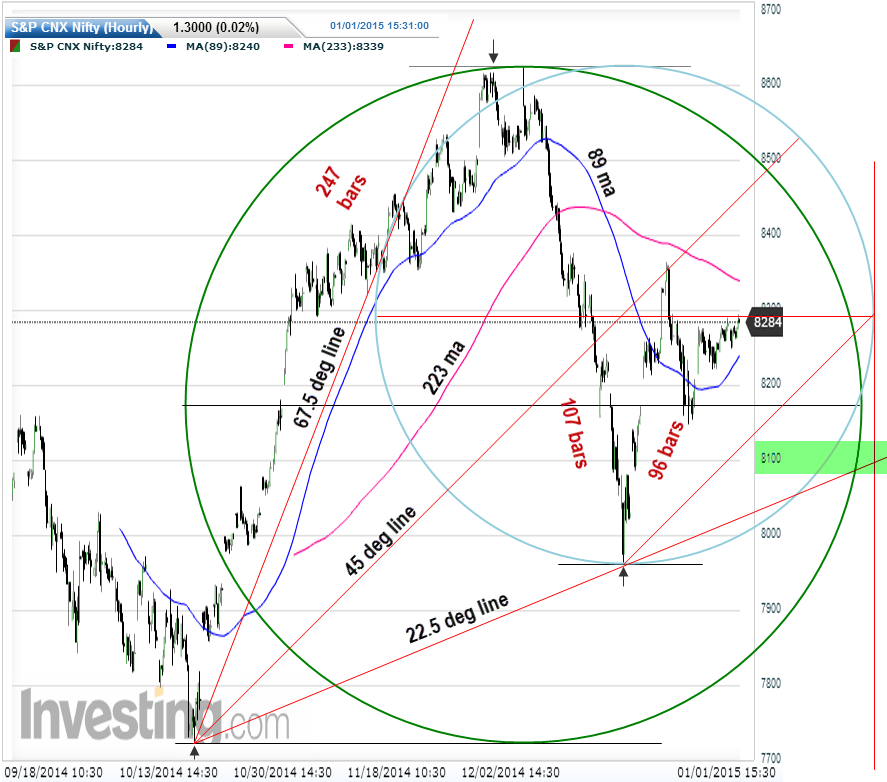 we can see that, in hourly chart, Nifty is hovering between 89 and 223 MA values. If Nifty breaks down below 8240, then it could fall till 8100 levels. If it crosses beyond 8339, then it could go upto 8500. My bet is in the former, that of Nifty breaking below 8240...It looks increasingly likely, that in the very short term, Nifty could form a bottom on the 22.5 degree upward sloping line.
Time wise, 203 hourly bars have been consumed since the 8627 top. Since the upmove from 7724 had taken 247 bars, we have another 44 bars left to equal the upmove, time wise.
This brings us the next chart, the hourly neo wave chart...
As shown below we are in b of b, after which we have another down wave which will be c of b.That should conclude wave b, after which the last wave, wave  c,   up should commence..This means wave c of b should start down move soon. 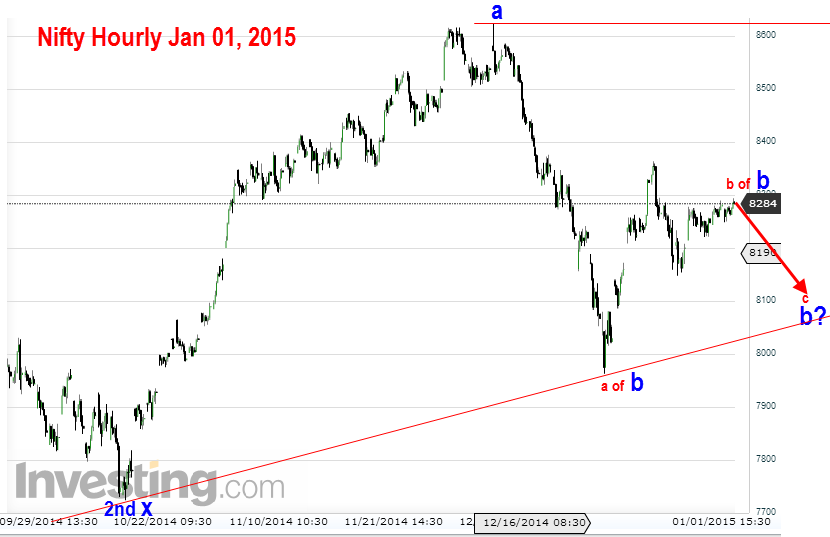 What do the stars say?

January 02:  Friday:
Red phase begins.
Max declination on Jan 03. Mars in Capricorn opposes Jupiter retrograde in Cancer. Sun squares Uranus first and then conjuncts Pluto over the weekend.
January 05: Monday: Full Moon and Minimum Latitude. During this Full Moon, Sun squares Rahu and Ketu and so does Moon.
January 06 & 07: Pluto at extreme distance. Mars enters the mid-point between Pluto and Uranus. Pluto begins to square Rahu and Ketu.
January 08: Uranus begins to conjunct Ketu and oppose Rahu.
January 09 Friday: Mercury and Venus begin their close conjunction.
This will continue upto Jan 17th.
In the meantime, Mercury is losing its speed rapidly and getting ready for becoming retrograde on January 22, 2015.
Moon reaches its farthest point from the Earth.
Starting from January 02, till January 10th, we are destined to go through some heavy afflictions. The sky is in ferment, no doubt. What is more important is that long term planets are getting into hard aspects to one another. Pluto, Uranus, Rahu, Ketu….
Astrologically, this period favours the bears. Be careful of your long positions. Since Mars is involved there could be sudden and rather heavy down moves.
Somehow I get the feeling that this longer term uptrend  is going to end very soon…When slow planets get into aspects, that is an ominous sign.

So trade carefully with proper stop losses in place.

A wonderful and happy 2015 for you, Manoj. I was travelling with family and so could not update before this. 2015 is going to be a very exciting year for traders and investors alike. Let us look forward to some good times!

Happy 2015 Shva. And thank you for your remarks.

Happy New Year Suresh. Have a gr8 year ahead