Friends, let me first address the question of astrological analysis. Contrary to what some of you have expressed, there is no lack of continuity here. Astro analysis, most often in the past, has happened once a week, during the weekend. But sometimes during the week, I post articles of a technical nature in addition to the technical ones you see on the weekend as well.
Let me start with the conclusions of
http://niftyastrotechnicals.blogspot.in/2015/01/nifty-astro-view-point-jan-19-to-23-2015.html

“We find that in all major turning points, Rahu and Ketu were involved in aspects. Mostly when trines were there, we had long term falls. Squares tend to produce a bottom after a fall. The effect of Saturn square Mars and Venus opposite Jupiter also is the same. To top it, we have three lunar phenomena this week, including a New Moon. So astro suggests that there is a scope for a fall and bottom formation. The question is whether Jan 23 is the low or will there be further downsides because of Ketu Uranus conjunction, opposed by Rahu?
That we will have to wait and see....”
So, analysing further,
In 2007/08, we see Pluto Ketu trine. Market Topped
In 2010, we see Rahu conjunct Pluto and opposed by Ketu. Market Topped
In August 2013, we see Ketu trine Pluto.  Market bottomed. (Jupiter was square Uranus, Venus was square Jupiter and Venus was square Uranus. In fact any triangular square formation is a sign of a bottom formation.)
So, when Ketu and Pluto become trine, markets go through a reversal point. Either topping or bottoming.

In January 15, 2015, Rahu and Ketu were square to Pluto. (We see the same triangular formation…Pluto, Ketu and Rahu. Uranus adds another additional dimension.)

What was our observation?
“Squares tend to produce a bottom after a fall”.
We have seen that Rahu always brings in an element of surprise or unpredictability. Not for nothing is he referred to as Maayaavi, by the ancients. Additionally, Ketu was conjunct or close to conjunct with Uranus. Both of them are known to produce surprises and sudden market upheavals.
So the Rahu Pluto Ketu square did produce a bottom, but not after a fall. The bottom was instant, on January 15th…By its very definition, a bottom means, market reaches a low point and then moves higher.
This is what happened on January 15th. Nifty made a bottom of 8237 and had since, moved higher, upto 8911 so far.
In fact the additional aspects of Saturn squaring Mars and Jupiter (R) opposing Venus only accentuate the bottom formation, or rather the up thrust after the bottom.

So, Astrological phenomena were true after all. My understanding alone was faulty. I had expected a further fall and then a bottom formation. Instead there was a bottom formed without any further fall..

Rahu Ketu axis squaring a Pluto Uranus duo which itself is in a square, is the rarest of rare celestial phenomena. It is not going to happen in our life time again. So I guess, you may make some leeway for my fault!
To sum up, the most important lesson I have learnt here is that slow moving planets when they get into aspects with one another, produce powerful effects. Squares and oppositions tend to produce bottoms while trines and conjunctions tend to produce tops. More specifically they produce heavy reversals. Exact nature of reversals could be gleaned by also analyzing what other aspects are in vogue at that point of time.

Whenever Pluto and Uranus head for a square, markets tend to race up to this rare signal.

Final Square is on March 18, 2015.
In fact, between December 24 2014 and March 18, 2015, Uranus and Pluto do not really go farther than one degree. Within this large time period, from February 20 to 18th March, Jupiter trines with Uranus.
So the up move should last with corrections upto March 18. 2015, which is 37 trading days away. In fact the volatility could increase substantially, because of the following aspects from February 20 2015 onwards.
20 Feb Uranus begins to trine Jupiter. Curiously, Jupiter Uranus trine ceases on March 18th!
21 Feb Venus conjunct Mars in Pisces
23 Feb Sun squares Mars.
01 March Venus joins Rahu Ketu axis.
04 Venus square Pluto-conjunct Uranus- both trine Jupiter. (Pluto, Uranus and Jupiter are slow moving)
05 March Mars joins the Rahu Ketu axis.
11 March Mars square Pluto-conjunct Uranus- both trine Jupiter
15 March Saturn turns Retrograde. (Within three days, Uranus and Pluto will be exact square. Uranus and Jupiter will cease their trine relationship. Again all players involved are slow moving.)
In the short term, upto February 07, 2015,these are some important signatures:
31 Jan Venus squares Saturn
01 Feb Mars conjunct Chiron
01 Feb Sun trines Rahu
01 Feb Venus conjunct Neptune
04 Feb Full Moon
05 Sun opposes Jupiter ( R)
Since we had a Mars Saturn square on January 16, we may expect a trough formation by the weekend or early next week. Do note that if a trough has to occur, prices have to first stop rising, reverse into a down move, form a low and then rise again.
When they rise again next week, they will immediately encounter resistance from all the above signatures and so there maybe another reversal from a top.
In short, the persistent uptrend which we had seen maybe coming to a close astrologically.
Let us just see historically how one set of conjunctions have behaved in the past.
Uranus Ketu conjunctions…..


We had one on January 18, 2015. This was special because Pluto also was involved in a square.

Uptrend was arrested in February 1984. 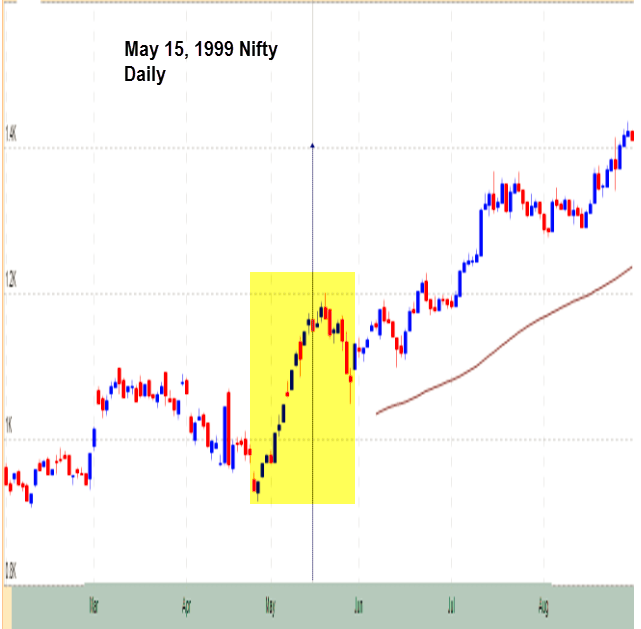 In May 1999, markets declined after a prolonged rise.
We have the same signature from 18 Jan onwards..
I shall cover technicals in the next post...
Posted by Tekkiesuresh at 11:57:00 PM

Fantastic this is a hallmark of a true champion it not about failures or success but about our learings and key takeaways. Quality research keep it up. God bless you.

I agree nifty has gone up for 8 continuous days on daily time frame in last 5 years it only done once so a high probability of correction till 8680-8700.

Thank you for your understanding and comments, Niftybaba. Let me look at levels in my technical post. All the support of like minded people is the only encouragement I have.

thanks suresh bhai for sharing ur views

Sureshji can u highlight how many times such astrological combinations have come and the two examples are pretty old. Nifty has corrected today but after making a new high.

Niftybaba, Uranus Ketu conjunctions are rare. Uranus takes 7 years to cross one sign and Ketu takes 18 months to do the same task. They also move in opposite directions. So conjunction of Ketu and Uranus does not happen often.Regarding the examples being old, the effects are valid. This is because the primary emotions driving the markets have never changed. They continue to be hope and greed.Maybe we have sophisticated hopes and greed now, emanating out of sophisticated technology! But the primary effect is the same! In that sense human nature has not evolved at all.In the 10th to 12th centuries people fought religious wars using swords and horses. Today also they fight for religious wars but using sophisticated weaponry. People used to defend one God and decry another. Same thing is being done today!Daily astor analysis is indicating one more rise and then a more pronounced fall. We shall wait and see. Even in the Ketu Uranus examples, you can see that the market continues in the same vein some more and only then reacts. When we have a larger perspective, the intense intraday movements lose significance and sometimes a totally different picture emerges.