We had mentioned in this space before, that 2013, is the year for large planets to form planetary aspects which can cause long term effects in all spheres of our lives.Please see the link for a detailed explanation of the various long term planetary effects in store for the next three months.

What is important to note is that these long term effects begin now.We are already witnessing turmoils in commodity spaces, currencies and the bond markets. Before long every other market also will be subject to these planetary diktats.
Two of the most important right now are shown in italics in the tabulation below. Saturn Neptune trine can be the long term catalyst for the other planetary square, Uranus-Pluto to be activated.


The only known record of a Uranus Pluto square and its effect on markets is reproduced below... 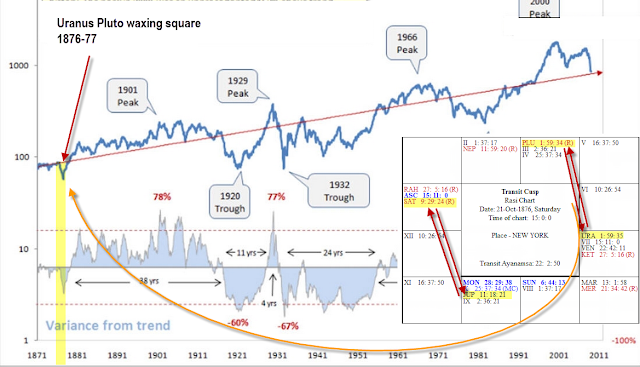 We can see that in 1876-77, Jupiter and Saturn were also in the picture forming a square and being square to the Uranus Pluto axis. This time round Saturn and Jupiter are forming a trine, which makes us assume that there is hope for an ultimate turn around in the world situation after a significant decline.
The aspects formed by Sun, Venus and Mars with the slow moving planets, all point out to a trough formation between June 11 to 18.

Here is a chart on the cyclical expectation of an impending long term decline... 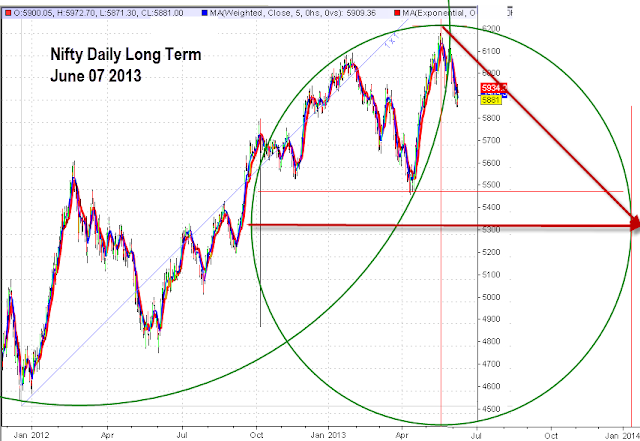 Zooming in on the situation right now,

Venus Antara-Rahu Sookshma ended yesterday, on June 11, 2013. We are expecting a bounce up in Jupiter sookshma before a clear cut decline commences.
Wave wise, B of Wave B, is seeking to achieve 61.8% retracement from 6229 levels.5750 to 64 is an important level to watch out for. 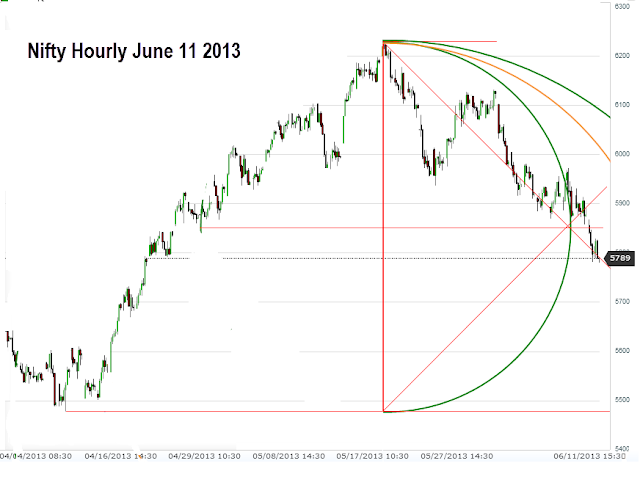 The hourly cycles also point out to end of the current decline- but then these are all just suppositions.
Let us wait for the market to point out the way ahead.The moving averages are all pointing downwards. Let them turn up before we cover the shorts.
Happy trading.
Posted by Tekkiesuresh at 9:35:00 AM