Last week we had commented about the extreme declinations / distances of Neptune, Mars and Venus for Jaune 04,05 and 06 and expected a change in trend.What had actually happened is that the extremities only slowed down the fall, allowing Nifty to undergo full time correction.

As can be seen from the chart, Wave A of B had consumed 26 trading days, while wave B of B has so far consumed 13 trading days, that is achieving 50% time correction.50% price correction from 6229.45 comes to 5853 and Nifty has so far done 5869.So the current down trend seems maturing.
Astrologically our observation of Nifty behaviour in Rahu Sookshma and Jupiter Sookshma is that closer to the end of Rahu Sookshma, Nifty changes direction and moves up in Jupiter Sookshma before turning down decisively. This elusive upmove may materialise now.Lunar aspects are bunching up towards the weekend and that is one more indication of a reversal.
Let us constantly keep in mind that with Jupiter leaving Taurus, the long term trend is about to change fully for a while.
Having said this let us look at the technicals. If we only consider the price action, post 5477.20 low of
April 10, 2013, then we are in wave B.A leg of such a wave was completed at 6229.45.The current downtrend is wave B of the larger B.This leg has not even reached 50%. It can do a time or price correction of 61.8% at the least, to be a normal B wave.Price wise 61.8% comes to 5764 and time wise it is June 12/13.This time zone also  is to be carefully watched.
To conclude:
1.Currently we are in No Man's land.Since 50% time correction is over, we may expect a reversal. If so it should rise up to 6100, the bottom portion of the 45 degree line.
2. If   Nifty drifts lower or bounces along without any meaningful movement, then she is aiming for the 61.8% correction either price wise or time wise.
3.The C wave upwards which could follow, could move up to 6100+ levels.

Trading without stop losses in such an environment is suicidal. 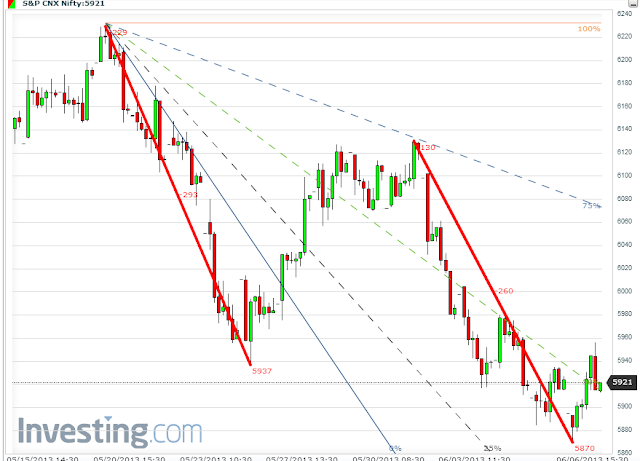 In this hourly chart, Nifty can be seen hobnobbing with the 50% downline. If it overcomes, then the next is the 75% downline.... 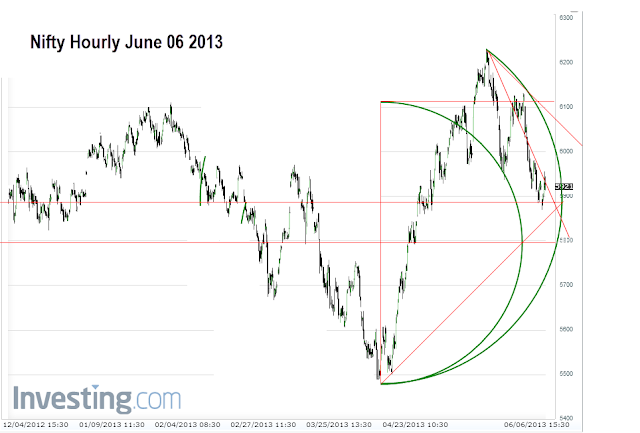 Here is an update of the circular chart.The current downtrend could die if the Index comes out of the arc. It is quite close to it. Any sudden fall may have support around the 5900 line first followed by 5800 line.. 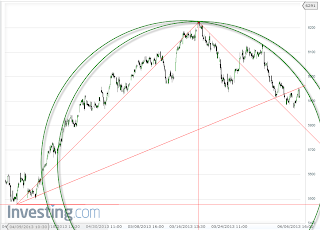 The circulars also seem to indicate the 5800 price line as important.
Posted by Tekkiesuresh at 9:07:00 AM