After falling consistently from 6133 levels of May 30, Nifty had formed an island reversal on June 14, 2013. which is very much within our expected time band.Several astro signatures were indicating such a phenomenon.Technically also this could mark the end of b wave of B and the reversal could begin c wave of wave B.We have completed 44 days of major wave B. Wave A had consumed 49 days from its perch downturn levels of 6111.80 of January 29, 2013.So in another 5 days of trading we will reach equality time wise with wave A.
Let us look at the declination charts.... 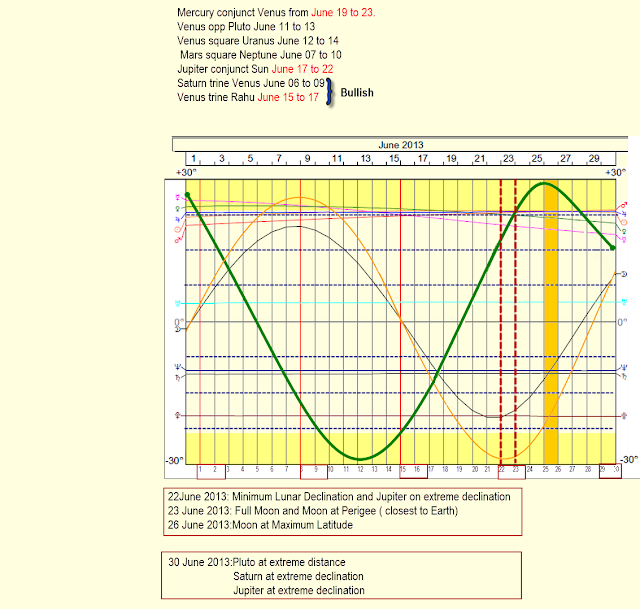 We see the weekend of June 23 seems to have a culmination of several celestial aspects- Minimum Lunar declination, Jupiter on extreme declination,Full Moon, Moon at Perigee and Moon at Maximum Latitude.
Also the bullish traits of Saturn trine Venus and Venus trine Rahu would have played out by June 24 and the negativism of Sun conjunct Jupiter will start to play out post June 24.
If you had followed our previous posts you would notice that we expect major cyclical turns to happen post June 20, caused by Saturn Neptune trine. We also know that Jupiter in Gemini is not very positive. So everything points out to one more up move before the global markets turn down decisively.
Of course it will not be in one straight down move- and there will be several interesting upsides.
If there is an up move what are the levels possible?

Island reversal represents a possible end of the downturn from 6229 levels.6050, 6100 and 6200 are the levels of resistance the cycles indicate. 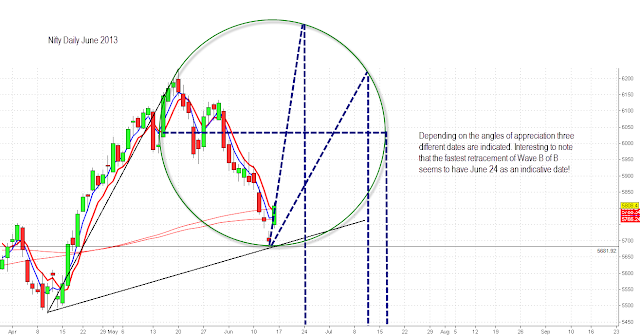 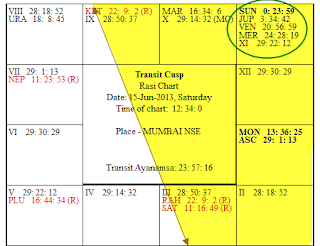 If we observe the above Astro Chart, we can see that all our regular planets are on one side of Rahu Ketu axis. In other words all day to day planets are inside the yellow coloured area.This formation is known as Kala Sarpa Yoga and this does not bode well for Nifty`s valuations.This indicates a medium term negative period in the offing.
Within the yellow area, we also notice that Sun, Venus, Mercury and Jupiter are all in Gemini. This indicates heavy volatility and uncertain movements. Preservation of capital must be the utmost concern now. Profits can always be made, if adequate capital is available.
So please trade utmost carefully. Have tight stop losses. If he trade is going against you, refrain from trading immediately. Allow the planetary situations to change before attempting the next trade.Remeber Moon moves in a sign for 2.5 days. So if you face consistent losses, refrain from trading for three days and then start afresh. Market will always have opportunities.