In Financial Astrology, Moon plays a very important part, as a translator and a releaser of planetary energies. In other words, the planetary aspects, whether good or bad, will actually translate into events and actions through the agencies of Nature, including human minds, only when Moon connects with the planets in some way.
This apart there are several other aspects of the Moon which have an echo in the financial markets. Echos which diligent traders can profit from, if followed sincerely.
One of them is lunar declinations and the effect on markets.Just as latitudes and longitudes help us pin point a place on the surface of the earth,planetary declinations help us pinpoint the positions of planets on the celestial sphere. The term equator here means celestial equator.While all planets have declinations, of particular importance to short term traders is the declinations of the moon.
For the records, Summer Solstice actually means that the Sun has reached its maximum northern declination point at the Tropic of Cancer and is now reversing direction and is moving towards the Tropic of Capricorn.
See what happened during the recent Moon declinations in June 2012:

The directions of the lunar declinations do not represent the market directions. Every inflection point like reaching the Northern most point, crossing the celestial equator, from North to South, reaching the Southern most point and reversing direction- all give suggestions of market reversals.Hence my expectation of a mini reversal on Monday, June 25, is an upward move and a big reversal by the month end, June 27 to 29, is a down move.

Declinations may not be singularly relied upon. When two or more lunar events happen together, then we may anticipate a market turn.Of course, subject to technical confirmation!

Another lunar event which is worth watching is the change in direction of the true nodes of the moon, what we call as Rahu and Ketu. Rahu is North Node and Ketu is South Node.

June 27, Wednesday is when the nodes turn direction again and become direct.Since now we have two lunar events happening on the same day, it pays to be watchful.

Hmmm..Interesting!
On Wednesday, at 13.11 hrs, Moon will square Pluto and at 13.23 hrs, she will oppose Uranus. Since it is a First Quarter Moon day, Sun also is connected and so we have an angular  planetary connect. Sun in Gemini, Moon in Virgo, Pluto in Sagittarius and Uranus in Pisces.In Navamsa, Ketu is conjunct with Moon, in Aries.
Saturn becomes direct on Monday at 13.17 hours and Venus becomes direct on Wednesday, June 27th. These two powerful stations have their orbs extending up to July 04th as mentioned in earlier posts.From 04th of July, Moon will start transiting in Aquarius, Pisces and Aries. Now with Sun in Cancer, Mercury in Leo, and Venus in Gemini ( all Sayana positions),we could have potential reversals.

Since Venus is in Vargottama both in Rasi as well as Navamsa and since Moon is in Pooram star, ruled by Venus, on Monday, the markets may be positive after a minor hiccup in the opening.Jupiter squaring Neptune is bad news for Crude and so good news for India.Unfortunately Venus is in qc with Pluto who is never letting go of the Rupee. In fact with the Nodes also squaring Neptune, oil is boiling. But then these square combos including.the latest one involving Jupiter is sapping away confidence, hope and energy from the markets.
June 27 and 28 seem to be critical days. Any which way, I still feel that the market has some more up steam left. But with major planets changing stance, trend changes also are to be expected, but after the bull move.
5300 seems to be a reasonable cap..
As the hourly chart says, even if the Nifty boat capsizes to 4930, it should still be considered as part of a bigger move.Breaking 4930, all bets are off. 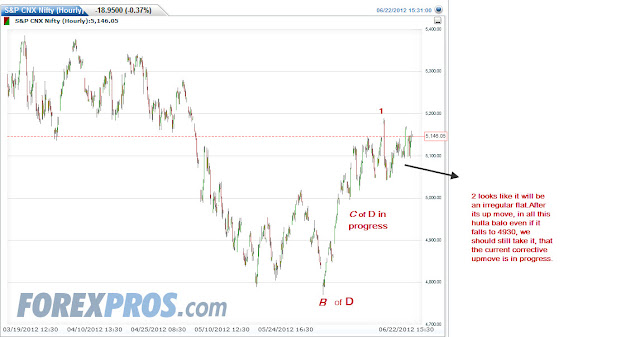 Of course we still have time for Uranus Pluto and the direct stations of Saturn and Venus.
Have a great week of trading.

Suresh - Astrology is "very tough one" i feel. I got ur blog address thro
"sometimebulls and sometime bears" )it's quite interesting to correlating.

Thanks for your efforts.

Dear Ratnakar,
To learn Financial Astrology, you need a base in astrology. The best base that I could think of is by going through the books written by the great Astrology Master, K.P.Krishnamurthy. His KP System is world famous and it has become the corner stone of world astrology, if I may say so. They have a book store in Chennai. You may contact them at 04428496046.His works are meant for all people and for all situations. You need not go through the full works. Just get all the basic principles ingrained. I shall then tell you how to get them applied into Financial Markets. Since there are so many conflicting points of view, in the first stage do not spread yourself thin by going into all kinds of websites etc.
Mind you, Iam also very much a student and every single day Iam learning.
Once you have the basics then you will be able to better interpret whatever stuff Iam uploading here. It is absolutely fascinating, I can tell you that much!
All the very best!

Sujatha ? Of JustNifty fame? Welcome. Iam your fan! I always enjoy your comments on Just Nifty.
Meanwhile Thanks for your encouragement. It is not very tough once we know the basic rules. Applying them logically, scientifically, making mistakes and correcting them honestly- this is the tough part.
Actually this blog is an act of self discipline for me. Since this is in public domain, I have to be as honest and non judgmental as possible.Once I keep doing this, I will learn from my mistakes or people will point them out for me.
Iam a firm believer that knowledge is to be shared selflessly and only in sharing will knowledge grow.
So keep visiting and offer your comments.

Please send me a mail to tekkiesuresh@gmail.com.I shall provide you with my coordinates.
One correction- It is not learning from me- it is mutual learning!