What a dramatic week!In one dramatic swoop, six days of uptrend was demolished in Nifty, on August 31. The uptrend rose to a crescendo to 11794 and dramatically reversed....Well the cycles and planets did forewarn us last week....Correction has now completed four days and we see desperate articles all over the net....!

Let us briefly examine what is in store..I say briefly because I intend to keep my posts, short...More of them but shorter.

Current sub-cycle has so far taken 15 trading days and a clear top was made on the 11th day. Sub cycle length is shown in dotted blue lines and the crest time is shown in red lines.Overall current cycle length is shown in black dotted lines. We have completed 24 trading days so far.
So we make some inferences here:
1. The current sub-cycle is close to ending, possibly within a day or two. This means the present down-move may get arrested and another up-move may start within two or three days.
2.Current cycle was heavily right translated. This means the next sub cycle also could be a bullish one and possibly the 11794 levels could surpass. We have to wait and see.
3. Last cycle was of 54 days. This cycle has so far done 24 days ( see the black dotted lines ). It is unlikely to be as lengthy as the last cycle. We hazard a guess that this cycle could also be in the 30s category....which brings us to September 18 to 25 as important cycle top dates to watch.
Taking a closer look at the Index,

Entire rise started from August 14 from a bottom of 11111.That same bottom has 50 SMA approaching. So it is an important support.If Nifty touches this level and reverts, I would still consider as a precursor to a market top in the near future...All significant market tops show a breach and recovery first before a big break down.
It is significant that Nifty did not ever go down to 50 SMA since 27 May 2020. It had breached 20 SMA briefly but has always recovered. Now also, 20 SMA is breached and we have to see if there is a swift recovery from here.
A swift recovery will indicate that there is strength in bulls. A weakening to 50 SMA will indicate that the underlying strength has begun to shift to the bears. No doubt a recovery cycle will still be there, but I would be very circumspect.
If 11111 is breached and Nifty closes below that, then all bets are off. Currently I feel that possibility is a little remote. 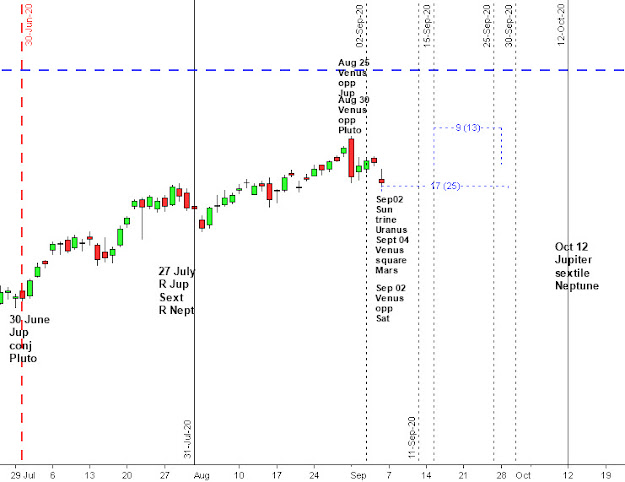 As mentioned last week, three signatures combined together to cause a top last week. Uranus retro effect, Venus opposite Pluto and Venus opposite Jupiter.
Venus opposite Saturn and Sun trining Neptune may precipitate a bottom this week.
By September 09, Sun trines Jupiter, but it is a weak cycle. So the new cycle beginning could be a little tentative. Next week we Sun opposite Neptune and Sun connecting to Pluto by way of a trine. Both are potent combinations and they could pull the market up.
When the market starts tomorrow, Moon will conjunct Uranus, the Master of suddenness! Would be interesting to watch what happens!
And September 09th, the Action Hero, Mars goes retrograde...Will it be advantage Bears by September end? We just have no option but to wait and watch!
Please trade safely. Volatility has increased and it is not going to go away anytime soon.
My pranams to all my Teachers of the past and the present, who are adding value to my existence!
Posted by Tekkiesuresh at 10:54:00 AM