We had expected stability to return to the markets last week. Uranus retro also was to positively impact the markets. And we saw that last week and how!

Bank Nifty opened at 22437 and rose throughout the week to close at 24611, a rise of 2174 points. Spectacular, indeed! Obviously the star parivarthana between Jupiter and Venus was helpful! The energy flow was better between these two financial planets because they were also directly opposite to each other on August 25. 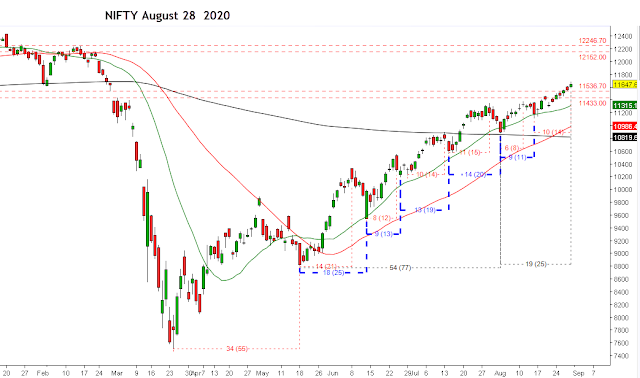 This is what we had mentioned last week.."Nifty started its new cycle on August 14th and by August 19th, it faced significant gap resistance in the area of 11433 to 11536.Nifty moved up to 11460 but then retreated needing more energy to cross the gap."

Where did the energy come from? 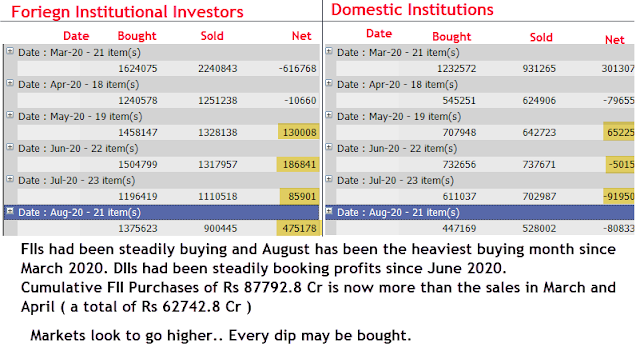 Coming back to the Nifty chart, we see that for every sub cycle from May 18 ( shown in thick blue lines ), the market had topped out within a maximum of 14 days..This is shown in red dotted lines.

So the first sub cycle  of 18 days,topped out on the 14th day

The current sub cycle is already 10 days old. So we can expect a correction within the next few days. Either this coming week or early next week. So have tight stop losses for all new bull positions.

Correction if and when it happens, could be to the 20 day average support line. Currently it is at 11315.

Because of the persistent global liquidity, corrections are generally shallower and rallies are more prolonged...Yet a long position without a stop loss can hurt like hell! 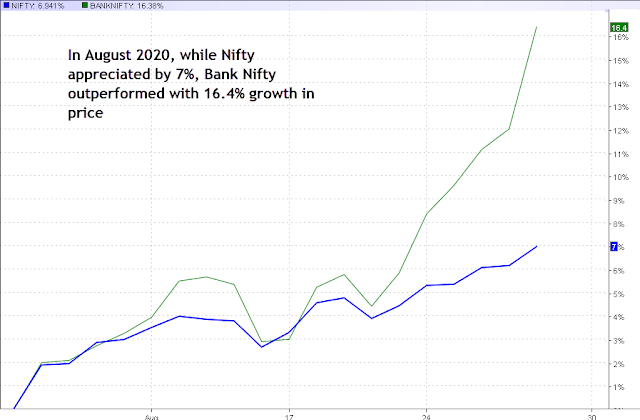 As shown above in Bank Nifty Futures, the last green candle had happened on high volumes...pointing out to bullishness in the counter..

Coming to the constituents of Bank Nifty,

Coming to Nifty constituents, here is a list of best performers inside Nifty....Again it was the Banking sector which was shining..

Here is a list of laggards...inside Nifty. Mostly from IT and FMCG Sector.Their respective weightage are given in brackets for instant understanding.When Reliance and IT Majors like Infy and TCS do not move, Nifty also moves tentatively, even if Bank Nifty fires on all cylinders.

We can see that Reliance was largely flat throughout August 2020. It is consolidating..

Exactly similar is the case with Nifty IT...A flat consolidating trend throughout August
Earlier when Reliance and IT were firing, it was Bank Nifty which was acting as a dampener. Now it is the other way..Bank Nifty has come out with guns blazing, Reliance and IT Stocks have gone into a shell.

Coming to the market as a whole, here are some sectors which have performed better than Nifty, in August.Stocks from these sectors are likely to grow faster...

Indices which are under-performing Nifty in August 2020

And sectors which are showing signs of cooling off.....

We are in a time zone where the faster moving planets Mars, Sun, Venus and Mercury are engaging with Jupiter, Pluto and Saturn with rather explosive results.

First it was Sun connecting with Jupiter, Pluto and Saturn by way of opposition  between July 13 to July 21, 2020. Markets dipped and then rose to new highs by 28/29 July.

Then it was Mercury connecting with Jupiter, Pluto and Saturn between July 30 and August 03.We saw a significant low forming on August 03, when Mercury was connecting to Saturn,

Mars took over on August 03 and connected with Jupiter, Pluto and Saturn by way of a square between August 03 and August 24.Market continued to be bullish expect for corrections caused by Uranus retro and Sun Mercury conjunction on August 17. Mars square Saturn effects are expected this week.

Meanwhile Venus started connecting with oppositions to Jupiter, Pluto and Saturn from August 25th to September 02nd, when Venus will square Saturn.This is pointing to a sub cyclical top, which is further underlined by Sun connecting to Uranus by way of a trine on September 02.We may expect some sudden reaction in the market causing a fall. Mar square Saturn effects also favour a bottom formation.Of course, every fall is a good buying opportunity.

With Jupiter moving towards a final sextile with Neptune on October 12, we may expect bullishness to continue, but with volatile reactions.

Let us flow with the money, but also take care not to lose our Stop losses.