Last week, between July 27 to 31, 2020, Nifty hit a high of 11341 on Wednesday and has been declining since then.We had expected the market to improve by about 250 points and then show some correction. Nifty did exactly that.From a low on July 24th of 11090 Nifty moved up to 11341 and has been declining.

Nifty cycle has now completed 53 days ( quite a stretch! ) and the ongoing sub cycle has completed 13 days. While Nifty has seen some decline, it is hardly sufficient to conclude a cycle. Our take is that some more decline is in the offing this week.

Nifty Fibo extensions are also pointing out that this week is an important one for the markets. 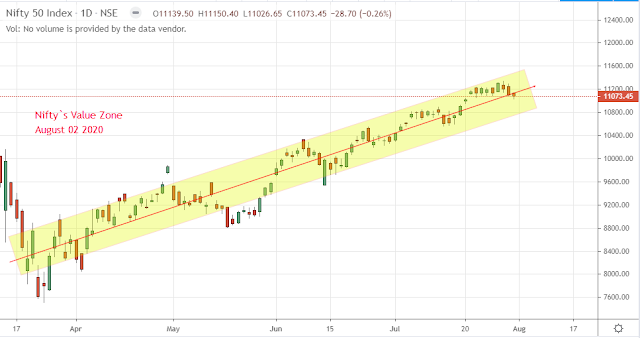 By and large Nifty has been maintaining its movements along the control price ( shown by the red arrow ) and has not shown any decisive weakness as yet.

On the contrary, Bank Nifty has slipped out of the value zone after playing below the control price for a very long time.This weakness will have a bearing on Nifty.

There are several astro aspects crowding in on the week.
Mercury is following Sun in opposing Jupiter, Pluto and Saturn.
Mars and Mercury have completed their angular aspect for the third time.
August 03 also happens to be the orb date for triple opposition of Sun with Jupiter, Pluto and Saturn.
Sun squaring Uranus mostly point to a top formation. The question is, has the short term top already formed on July 29? We will know this week!
Finally Venus meets Rahu in Mars star, on August 05th.Once Venus is free of Rahu, markets could look up.
So, we expect Nifty to be bullish in August with some volatility. In the near term, some more correction is expected before Nifty starts another bullish cycle.

Stay safe, yet be productive!