To explain in simple language, all markets operate in cycles.Here is a good explanation from:

Market Cycles: The Key To Maximum Returns By Matt Blackman

We've all heard of market bubbles and many of us know someone who's been caught in one. Although there are plenty of lessons to be learned from past bubbles, market participants still get sucked in each time a new one comes around. A bubble is only one part of an important phase in markets, so if you want to avoid being caught off guard, it is essential to know what the different phases are. An understanding of how markets work and a good grasp of technical analysis can help you recognize market cycles.

No matter what market you are referring to, all have similar characteristics and go through the same phases. All markets are cyclical. They go up, peak, go down and then bottom. When one cycle is finished, the next begins.

The problem is that most investors and traders either fail to recognize that markets are cyclical or forget to expect the end of the current market phase. Another significant challenge is that, even when you accept the existence of cycles, it is nearly impossible to pick the top or bottom of one. But an understanding of cycles is essential if you want to maximize investment or trading returns. Here are the four major components of a market cycle and how you can recognize them.


1. Accumulation Phase
This phase occurs after the market has bottomed and the innovators (corporate insiders and a few value investors) and early adopters (smart money managers and experienced traders) begin to buy, figuring that the worst is over. At this phase, valuations are very attractive, and general market sentiment is still bearish. Articles in the media preach doom and gloom, and those who were long through the worst of the bear market have recently capitulated, that is, given up and sold the rest of their holdings in disgust. But in the accumulation phase, prices have flattened and for every seller throwing in the towel, someone is there to pick it up at a healthy discount. Overall market sentiment begins to switch from negative to neutral.

2. Mark-Up Phase
At this stage, the market has been stable for a while and is beginning to move higher. The early majority are getting on the bandwagon. This group includes technicians who, seeing that the market is putting in higher lows and higher highs, recognize that market direction and sentiment have changed. Media stories begin to discuss the possibility that the worst is over, but unemployment continues to rise, as do reports of layoffs in many sectors. As this phase matures, more investors jump on the bandwagon as fear of being in the market is supplanted by greed and the fear of being left out.

As this phase begins to come to an end, the late majority jump in and market volumes begin to increase substantially. At this point, the greater fool theory prevails. Valuations climb well beyond historic norms, and logic and reason take a back seat to greed. While the late majority are getting in, the smart money and insiders are unloading. But as prices begin to level off, or as the rise slows down, those laggards who have been sitting on the sidelines see this as a buying opportunity and jump in en masse. Prices make one last parabolic move, known in technical analysis as a selling climax, when the largest gains in the shortest periods often occur. But the cycle is nearing the top of the bubble. Sentiment moves from neutral to bullish to downright euphoric during this phase. (For more, read The Stock Cycle: What Goes Up Must Come Down.)

3. Distribution Phase
In the third phase of the market cycle, sellers begin to dominate. This part of the cycle is identified by a period in which the bullish sentiment of the previous phase turns into a mixed sentiment. Prices can often stay locked in a trading range that can last a few weeks or even months. For example, when the Dow Jones Industrial Average (DJIA) peaked in Jan 2000, it traded down to the vicinity of its prior peak and stayed there over a period of more than 18 months. But the distribution phase can come and go quickly; for the Nasdaq Composite, the distribution phase was less than a month long, as it peaked in Mar 2000 and then retreated shortly thereafter. When this phase is over, the market reverses direction. Classic patterns like double and triple tops, as well as head and shoulders top patterns, are examples of movements that occur during the distribution phase. (For more on understanding moves in the major indexes, read How Now, Dow? What Moves The DJIA?)
The distribution phase is a very emotional time for the markets, as investors are gripped by periods of complete fear interspersed with hope and even greed as the market may at times appear to be taking off again. Valuations are extreme in many issues and value investors have long been sitting on the sidelines. Sentiment slowly but surely begins to change, but this transition can happen quickly if accelerated by a strongly negative geopolitical event or extremely bad economic news. Those who are unable to sell for a profit settle for a breakeven or a small loss.

4. Mark-Down Phase
The fourth and final phase in the cycle is the most painful for those who still hold positions. Many hang on because their investment has fallen below what they paid for it, behaving like the pirate who falls overboard clutching a bar of gold, refusing to let go in the vain hope of being rescued. It is only when the market has plunged 50% or more that the laggards, many of whom bought during the distribution or early mark-down phase, give up or capitulate. Unfortunately, this is a buy signal for early innovators and a sign that a bottom is imminent. But alas, it is new investors who will buy the depreciated investment during the next accumulation phase and enjoy the next mark-up. 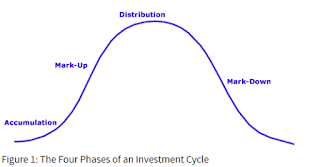 Timing
A cycle can last anywhere from a few weeks to a number of years, depending on the market in question and the time horizon at which you are looking. A day trader using five-minute bars may see four or more complete cycles per day while, for a real estate investor, a cycle may last 18-20 years.

Summing Up
Although not always obvious, cycles exist in all markets. For the smart money, the accumulation phase is the time to buy because values have stopped falling and everyone else is still bearish. These types of investors are also called contrarians since they are going against the common market sentiment at the time. These same folks sell as markets enter the final stage of mark-up, which is known as the parabolic or buying climax. This is when values are climbing fastest and sentiment is most bullish, which means the market is getting ready to reverse.

Smart investors who recognize the different parts of a market cycle are more able to take advantage of them to profit. They are also less likely to get fooled into buying at the worst possible time.
Read more: Market Cycles: The Key To Maximum Returns
Investopedia http://www.investopedia.com/articles/technical/04/050504.asp#ixzz4C2lhcAgj

Additionally, cycles are always measured from bottom to bottom, not from top to top. This is because sometimes tops can take a long time to form. Tops are because of greed and bottoms are because of panic. Panic is more powerful than greed!
Also cycles have orbs.One sixth of a cycle length is allowed as orbs.


Let us now get back to our long term Sensex chart:
In this monthly chart, the time span taken is from 1985 to 2023.Here, since it is a long term chart and since we are looking for long term cycles, I have used a monthly chart. All the cycle bottoms which are significant, are marked by red dotted lines.Bottoms have formed after 61,66,54,66 and 58 months.Low of August 2013, was the last significant low.The recent low of 6825 has come in March 2016, which is only 30 months from the low of August 2013.That does not fit in with this cycle we are seeking. That must have a repetition of at least 55 to 63 months for us to take into consideration.
Since the last significant low was in August 2013, counting 58 months forward we arrive at June 2018.If we take 66 months we arrive at February 2019. So we have narrowed the likely significant low time band to June 2018 to February 2019.That is what I have shown as a vertical coloured band.
If we look closely at the lows between October 2008 and August 2013, we see the 58 months get split between 38 and 20. If we look at the current cycle from August 2013, we see a significant low  has happened after 30 months. So we have another 28 to 30 more months for the next low.
Logically a top should come anywhere between the 13 to 17 month of this 28 months.
So we expect a significant top in March to May 2017.

Similarly the blue lines denote the cycle tops. They have been happening at 74,94,95 and recently at 86 month interval.
For argument sake, if we count 95 months from the top of January 2008, we are not locating another top. So we can tentatively conclude that the 8 year cycle of our markets has undergone a contraction and arrived in March 2015, instead of March 2016.This contraction is well withing the cycle orb prescribed.
So, as of June 2016,  we are in the early phase of  a long term cycle..where you not surprised by the sudden bullishness post 6825? Early part of long term cycles are always bullish..This means Nifty and Sensex have a long way up to go!
Of course, we are talking  only about major crests and major bottoms. It is logical to expect, several intermediate tops and bottoms in between.So every decline for whatever reasons, Rexit, Brexit, Rainexit..all are chances to accumulate good stocks.
As per Neo wave,soon we would be in long term wave 3...
We can see how beautifully Financial Astrology correlates with these cycles in a different post...
Posted by Tekkiesuresh at 4:33:00 PM

Hello sir, can u explain in simple language?

Thank you very much sir for such a wonderful article.. thanx a ton for such detailed explanation.. it really helped me understand and differentiate the cycles of the market.. thank you once again for ur efforts.. God bless you..

I gained good experience in identifying wave cycles, different faces and behaviors of market but trying to identify a way to combine wave cycles with time cycles so that estimated time and levels of reversal can be identifies. Can wave theory be combined with financial astrology??

Yes. Wave theory often syncs with Financial Astrology.Often times, the planets indicate when a bottom or top could form.