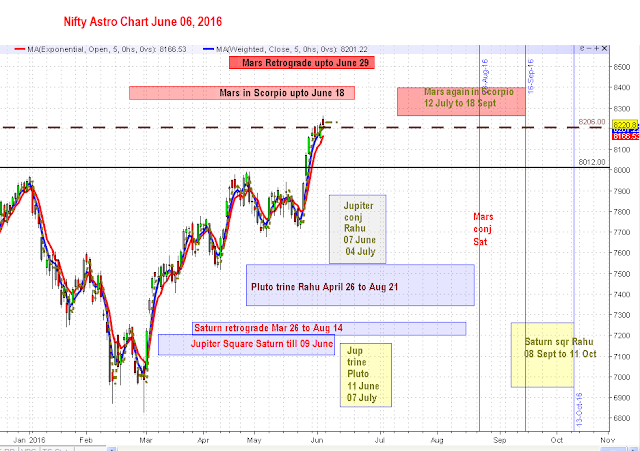 In many ways, June is an interesting month astrologically. Much has been written about the Grand Cross which is right now happening in the sky..
What intrigues me is the relative positions of Jupiter, Rahu and Pluto.
Already Rahu and Pluto are in a trine formation, from April 28 to August 21.
The midpoint of this formation is around June 22, 2016.
Jupiter will begin its conjunction of Rahu from June 07 till July 04, 2016.
Jupiter will begin its trine with Pluto from June 11 to July 07.
So we have three major planets in a powerful formation with each other in this period June 07 to July 07.
All three planets are in Venus star!
And Venus is placed in the 11th house for Nifty.
Till 18th June.
After that Venus  moves to the 12th house.
So the question is
will we see a peak in Nifty by this time of June 20?
Posted by Tekkiesuresh at 7:10:00 PM