We had quite an action packed week..

From a bottom of 8612 Nifty moved up to 8788 and turned down once again to close at a weak 8571 on March 20. As can be seen, with the formation of lower tops and lower bottoms on the daily chart, Nifty`s trend has turned down. 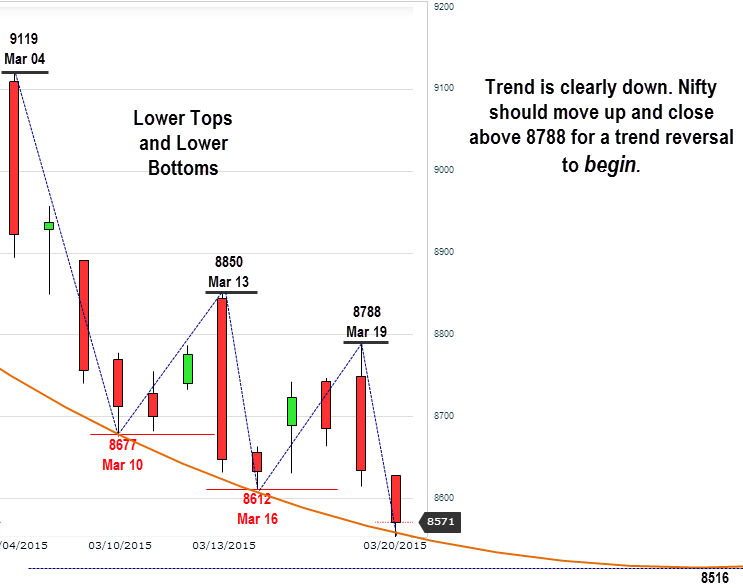 Actually, on every positive news, Nifty has encountered fresh selling.
Looking at Bollinger Bands and the Stochastic Momentum Indicators on the daily chart, 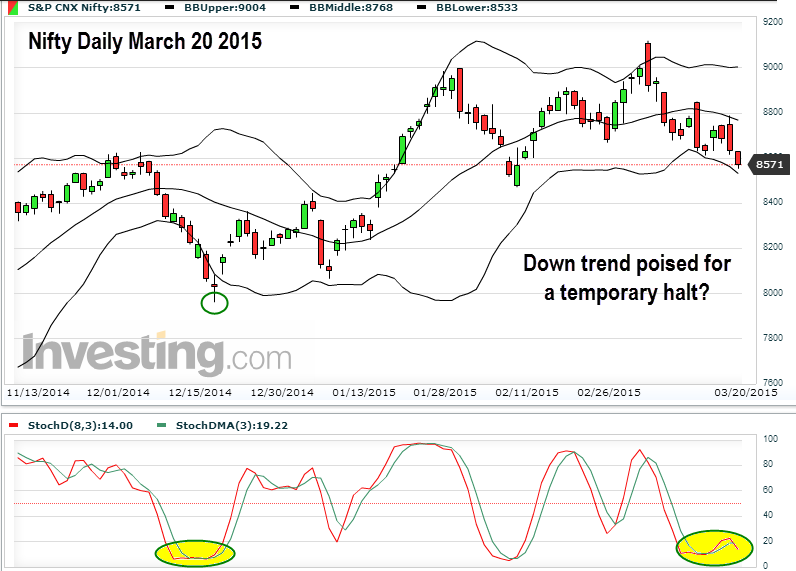 We see that Nifty has reached the lower BB and is poised for a break lower. Such a break is a positive indication of the counter trend beginning, upwards. Stochastic Indicator is also showing signs of bottoming and the next upward movement may soon begin.
Looking at the weekly picture of the same indicators, 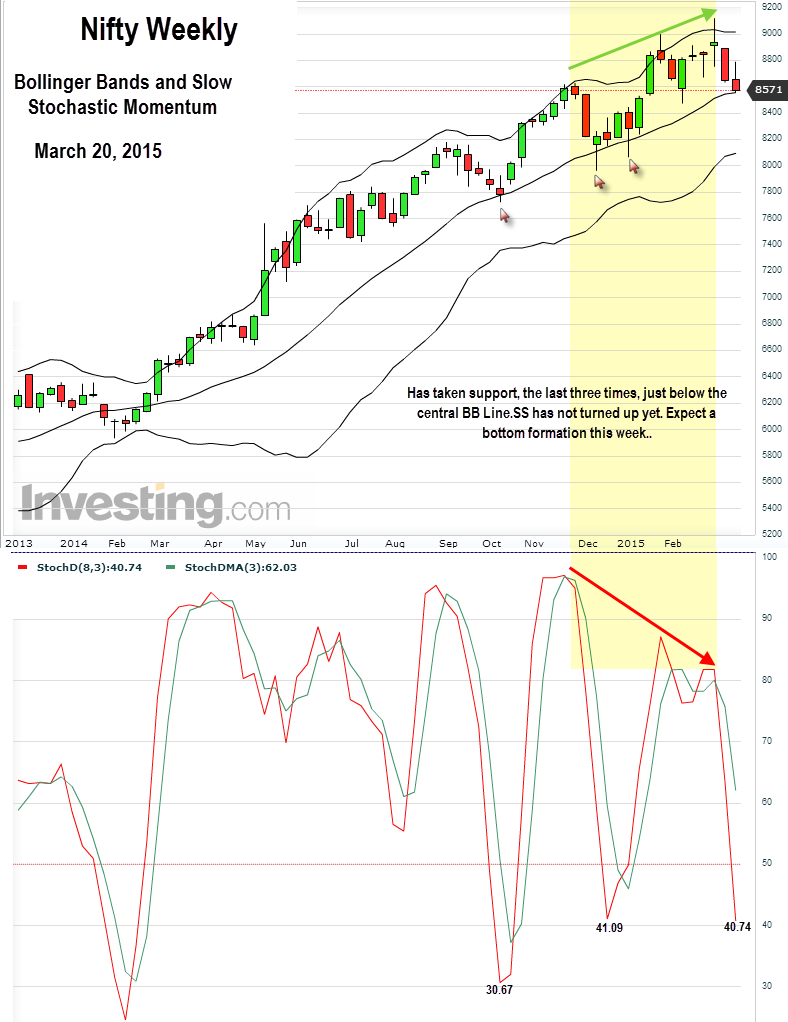 We see that the negative divergence which was persisting for the past 14 weeks has at last manifested as downward price movements, from March 04, 2015.Since the previous week`s candle shows a shooting star formation, we may expect Nifty to spike down this week and form a bottom.

This means any rise from 8571 levels in the early part of next week, is only temporary and Nifty could again go down to fresh lows. How low could it go?


Looking at the hourly chart, using Gann angles on a Gunner system, 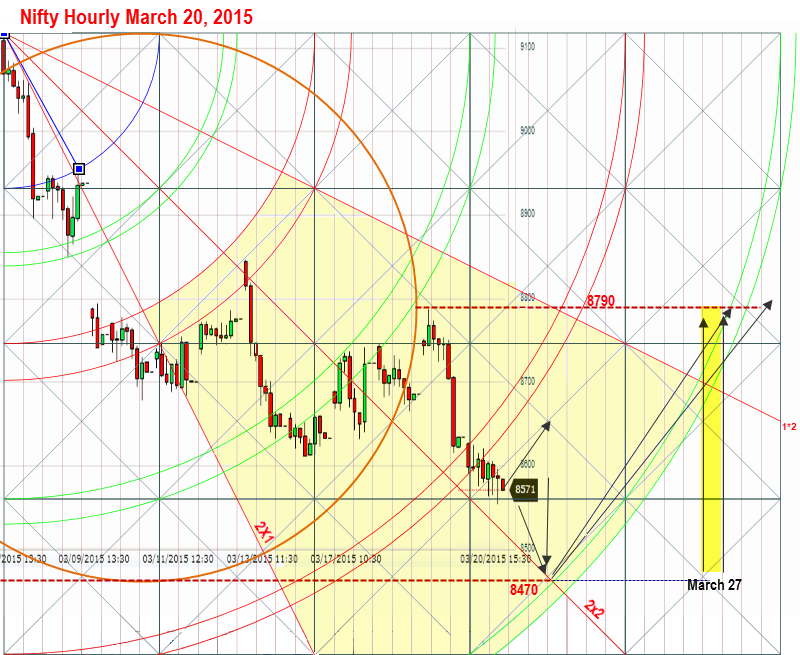 We find that the angle low comes to 8470. This also is the bottom formed by Nifty on February 10, 2015.Resistance levels seem to be 8790.Nifty has been sliding down the 45 degree angle after regaining it from the 66 degree angle. (2X1).
If Nifty moves up on Monday, then this chart suggests that 8650 could be the immediate resistance.
If it continues to weaken, 8470 is to be marked for a reversal.
What does our leading indicator say? In case you are wondering what it is, it is astro of course!
Let us recap:

Conjunctions of Venus with Ketu on March 01 and conjunction of Mars with Ketu on Mars , led to a crest formation on Mars 04.
Saturn retrograde on March 14 accentuated the negativity.
Uranus Pluto square of March 17 reduced the positivity in the market. So post this square, market continued to fall.
March 17th was also the final date for Uranus Jupiter trine-second passage.
Solar eclipse of March 20, involving Ketu with the luminaries, Sun and Moon deepened the negativity.
Net, net Nifty has moved down from 9119 to 8533, a depletion of 566 points.
So what is there this week?
a.    March 20 was also a Super Moon. Moon was in Perigee and also was a New Moon. So this week we may see positive movement to start with.
b.     Let us examine this Jupiter Uranus trine a little more. There seems to be a post formation implication.. 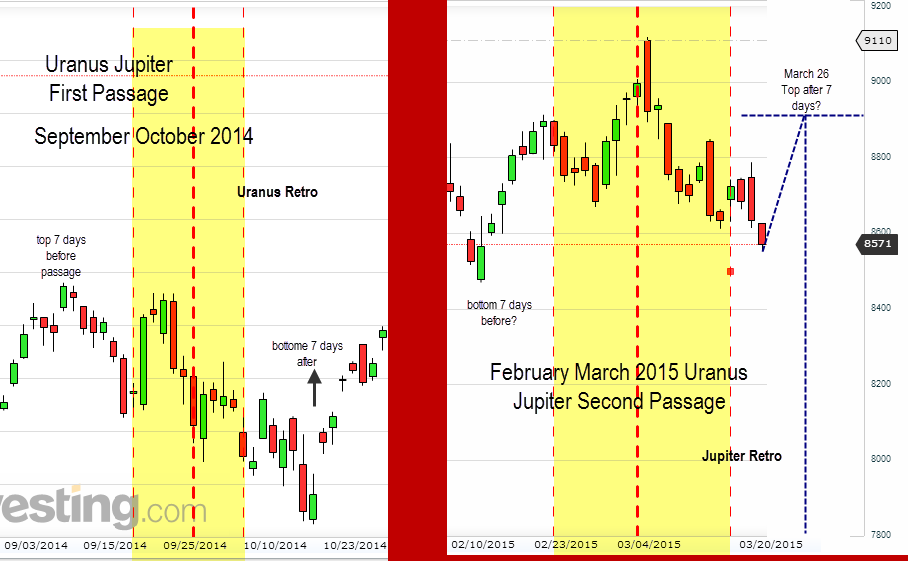 We had the first passage in September- October 2014.7 days before the passage start date, Nifty had made a top, and fell into the passage date. Uranus was retrograde and Jupiter was direct then. After the passage, Nifty fell into a bottom exactly seven days after. Refer the chart above.
Coming to the second passage, Nifty formed a bottom, seven day before the passage date, and rose into the passage. Here Uranus is direct and Jupiter is retrograde.
So it goes to expect that Nifty will rise to form a top seven days after the passage date? If so March26/27 could see a top.( Now, let us not think it is going to be an all-time top. It is most probably an intermediate top, given the negativity of other planetary formation.
c.  Mars ingresses into Aries on March 24th. Normally this is a bullish signature, but with Jupiter in Cancer, we could see some more negativity. 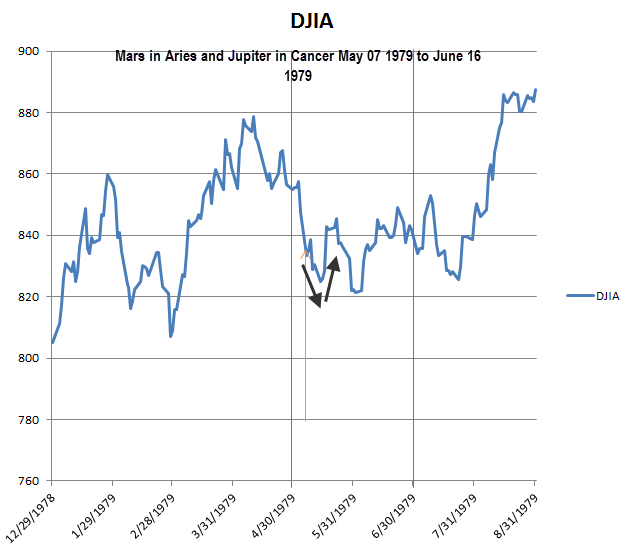 See the chart above. With Mars in Aries and Jupiter in Cancer, after a brief up move the market tanked down to a new bottom and later rose upwards. 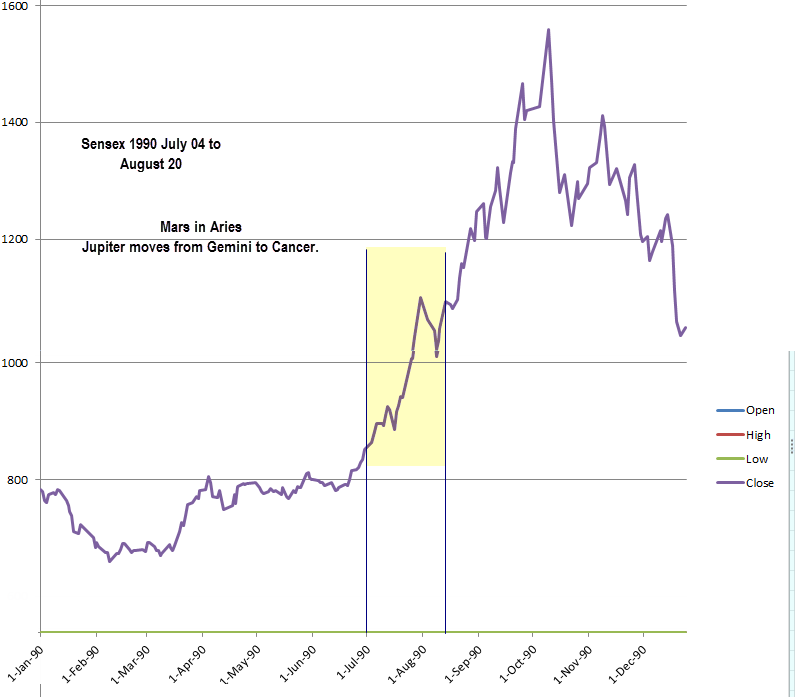 In 1990, when Mars was in Aries, Jupiter was in Gemini. Sensex moved up. Later on when Jupiter moved into Cancer, there was a down move and then recovery. Now Jupiter is retrograde and has lost considerable speed, in readiness to become direct on April 08, 2015.So the down move may not be deep, but expected to be shallow.
This  last graph  of Mars ingress is from 2013. Nifty exploded up when Mars entered Aries, but Jupiter was in Taurus. 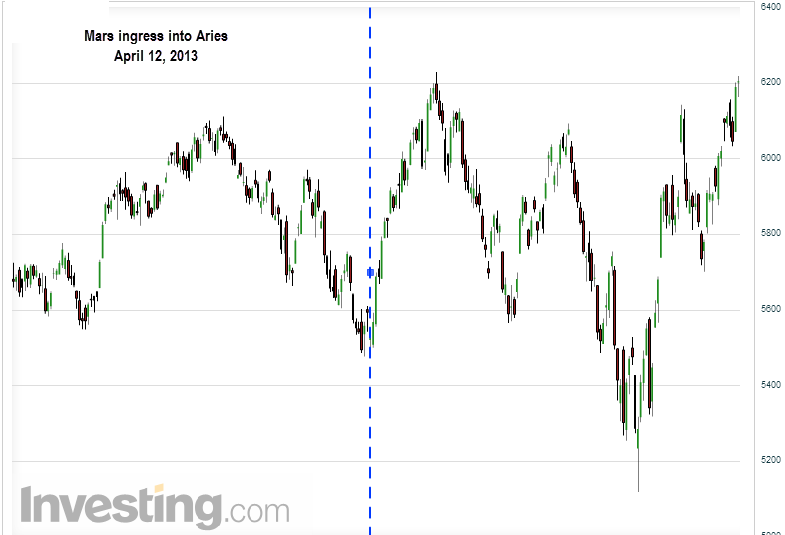 d. Sun waxing trine Saturn, Venus square Jupiter and Venus trine Pluto are all pointing to a bottom by April 01 or thereabouts.

e.Lastly we examine the eclipse and Ketu`s role a little closely. 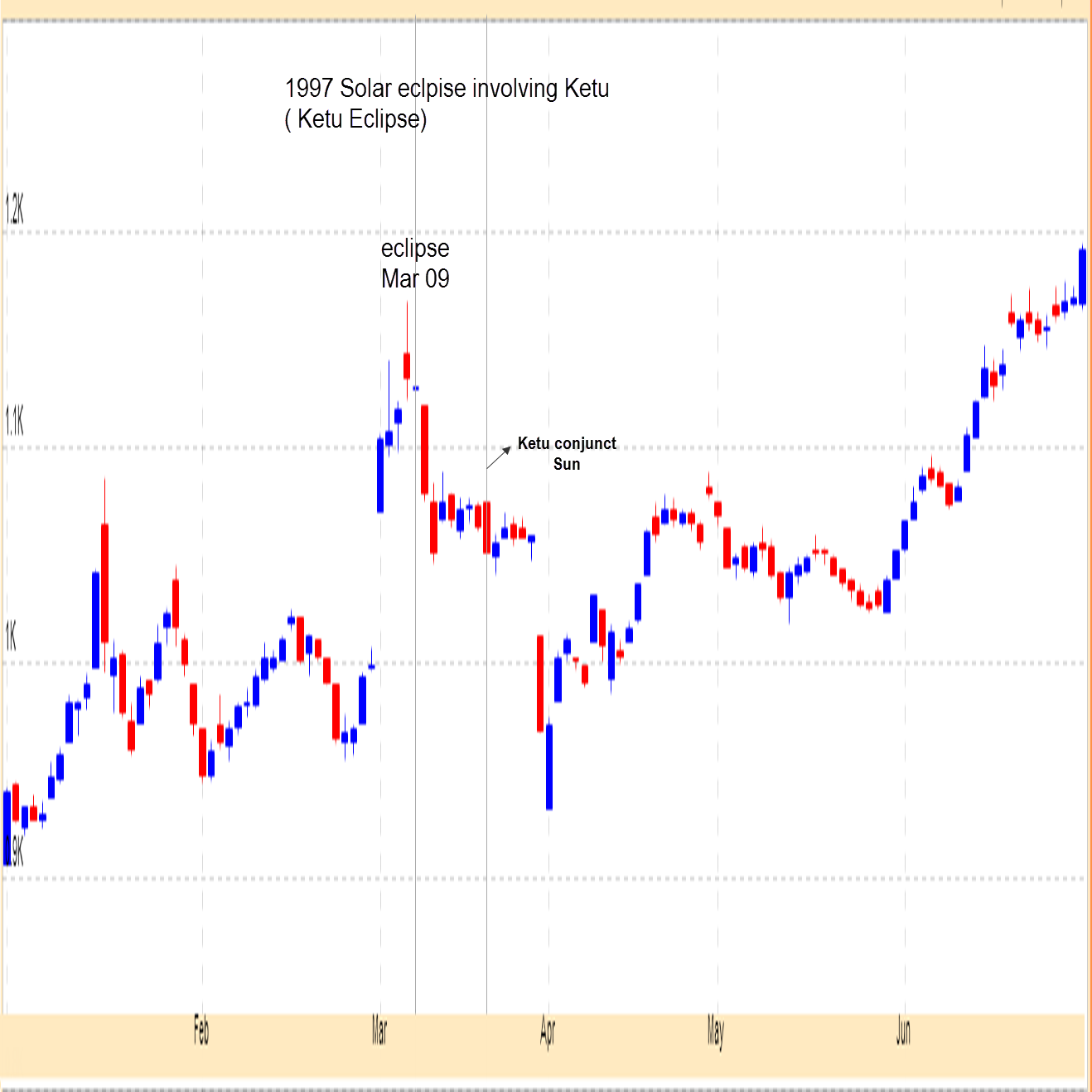 In 1997, we had a Solar eclipse involving Ketu. Solar eclipse happens when Ketu is at a distance, usually 8 to 9 degrees.. Moon passes over the Sun in a New Moon formation. Then at a later date, Sun conjuncts Ketu. So we have two negative formations, Solar eclipse and then the date when Sun conjuncts Ketu. Nifty reacted negatively for the eclipse, then consolidated and fell again when Sun conjuncted Ketu.
Fast forwarding to 2015, we had a similar solar eclipse on March 20.And Sun will conjunct Ketu on March 30, 2015, Monday. So we may expect a negative move on March 30.
So our astro indicators are saying that immediately the Market may move up for a couple of days, but may react down once again and form another low in the first week of April, 2015.
Here is the updated cycles chart.. 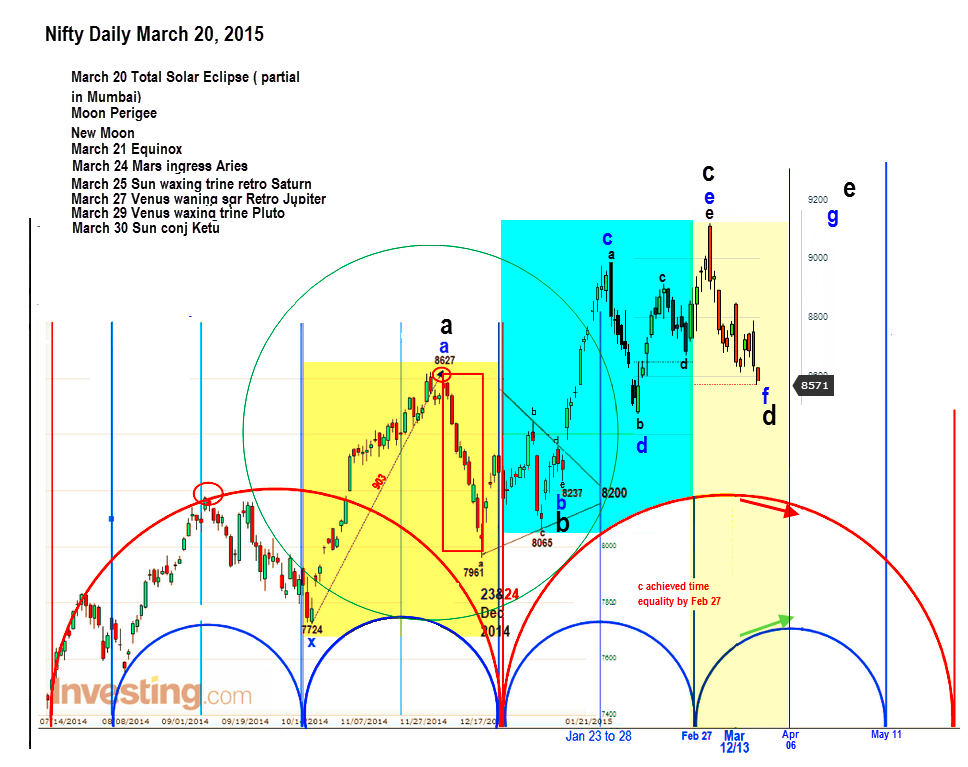 Last week we expected a down move till 8532. Nifty had come down upto 8553.
Neowave wise there are two possibilities coming up.

1. We are in the last leg of the complex correction. After 2nd x we are possibly in another diametric formation. Remember, diametric formations are quite common with Nifty. (One thing is certain. None of these major waves are impulsive. Probably at hourly levels we may see impulses, but not at daily or weekly levels.) Waves denoted in thick black alphabets denote the wave legs. Currently we are in wave d as per this count. 11 days have passed in wave d. So one more counter up move followed by a down move could end wave d. I prefer this count at the moment, because in diametric formation time equality is quite important.

2. The counts followed previously are shown in blue. According to this count, only one more up leg is pending. After which Nifty should correct substantially. The trouble is I do not see major astro formations yet to support this.

So let us go with counts enumerated in option 1 for the time being. Cyclically it looks like we are in for an inversion in the period April 06 to May 11.Let us cross that bridge when we come to it.

One word of caution. I keep receiving mails from people stating that they had assumed market positions anticipating a turn sometimes indicated in these posts.

To the young and less experienced, let me emphasize, that is a wrong strategy to follow.

1.Stay with the trend.
2.It is down now, be short.
3.It has been down for 11 trading days, so keep your stop losses very tight.
4.When a counter move starts in the hourly, wait for at least 3 higher bottoms before taking a long position.
5.If Nifty takes out the previous high, increase your long bets.
6.If Nifty turns down forming another lower top, go short again always with stop losses.
7.Rest all which is discussed here is for entertainment, and deeper understanding of the market.
8.Let me reiterate, price action alone is the reality. Rest all are mere assumptions.

Have a wonderful week of trading ahead!

Sureshji my reasons for this clearing to be down. Clients have not been able to cut long positions .open interest shows clients are long for this series and bears have an upper edge with 4 days to go.adv tax num very poor technically all long term bottoms near 100sma which is at 8515 so any bottom formation is perluded with fear which is missing.That is why i tell u to have an alternate view on astro incase market behaves differently.regards of a well wisher.

thanks sureshji for the update

Dear Niftybaba,
I do not understand your request for an alternative astro view. The astro views which I have explained are covering your possibilities also, is it not? I have mentioned here about a further down trend followed by an uptrend. The long term bull move is not yet over.Nifty is poised to make higher highs only after the downtrend going on right now is over. This is what astro and technical picture seems to indicate.Why should then there be any other alternative views?

Sir,can we see new high in nifty in april series if yes,around which date as per astro,thanks a lot

Nitin I haven`t looked into April. Also how does it matter if a new high is formed or not. Once the trend changes to positive let us just latch on. Once this down trend is over, I expect an upmove from the first week of April.

only the last part of less experienced persons is what I really loved and understood.

Good! That is all is needed!

Thank You Sureshji for your wonderful insights.

I am a student of finance and would like learn to do technical and astrological analysis like you. Can you guide me as to how can I begin?

Also can you tell me what should we consider as Nifty's birthdate?

hello sir,
if we see a top around this week end in the nifty, then subsequent shallow correction in the early days of april, should we believe Jupiter turning direct has put an end to this 4 months long volatility.
with Saturn retrograde upside can be capped as saturn being the lagna lord of nifty.
can we assume more sideways or rangebound movements in nifty till july and a convincing upmove only post that.
regards.
thank you.

Yes, once Jupiter turns direct, we can expect big moves. But volatility will continue to be present. In August 03, 2015, Saturn turns direct and forms a square with Jupiter, ( in fact Venus also will join with Jupiter to form a square with Saturn).Markets may fall into this square and form a low.In fact in May or June, we should expect a good correction into August., After the square, we may expect a spectacular rise, into the New Year.Saturn is not the lagna lord of Nifty. It is Moon.

Nifty futures lagna lord is Moon.Star lord is Mercury.Cuspal sublord is Venus.For stocks take the stock date and not futures.