Let me begin by recalling the comments of last week....

"Astro wise we see the market is in a mature stage right now.Sun Mercury dance has now started spinning in the wrong way.Big rises normally caused by a Uranus Pluto square seems muted because of the Jupiter retro formation in between.The stars seem to advise caution to the bulls and have a hint of a smile for bears.Since Saturn is in Scorpio, the underlying tone of the market may continue to be bullish,but a correction may happen."
Well, it was timely wasn't it? From a high of 8546, Nifty nose dived to a low of 8216, before closing at 8224.What is more When Dow crashed from 17991 to 17281, when other world markets corrected hard and when Oil came down to $62.54,anxiety became panic driven...
So what do we expect next....
Let us start with the monthly charts of Nifty first... 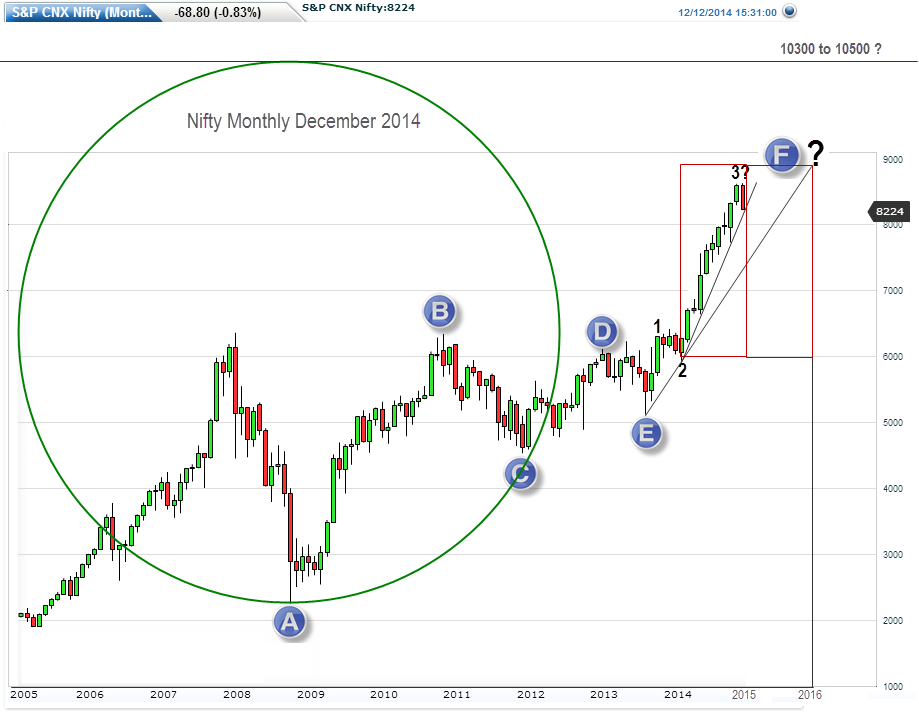 We are either in Wave F of the diametric which started from January 2008, or ABCDE correction had ended at 5119 and we are in an impulse upmove in which wave 3 is about to mature..If we consider wave F Is in progress, then wave F is a complex corrective involving two x waves in lower time frames. Currently we are in wave b of the 2nd-xabc formation. Accordingly after this wave b down, we will have one more wave c upwards, which will complete wave F in the monthly scale. Thereafter we should be seeing wave G downwards, which should consume the whole of  2015 and bring down Nifty to 7300 levels or even lower.
On the other hand if Nifty is in the 3rd wave and if it completes soon, then the 4th wave should be a complex corrective down which also comes down to the 7000+ levels.
After that Nifty may move up rapidly in 2016 and touch 10400-500 levels completing the trend cylce which began in 2008 October.It is possible that wave 4 or b wave of wave G assume bullish tones closer to the budget, appearing as if impulse push is on in the market. That will become clearer only closer to the budget..
So investors should offload their holdings in every rise, booking profits between now and the budget period.

Just look at the monthly momentum charts..It is in a very high 95 levels. It is showing tendencies of a down move. Even a small move could shave off 1000 to 2000 points..So caution is what the chart is flashing...

Within the monthly, we move to weekly charts...
What do we see? 8180 was an important level of trend maturity.Now at 8224, Nifty is very close to 8180. If it sustains at this level and moves up, then we will be in another uptrend.On the other hand, if Nifty breaks this level now, then we shall see much lower levels starting from 7800 first.Parallel 45 degree levels may act as supports if such a thing happens. 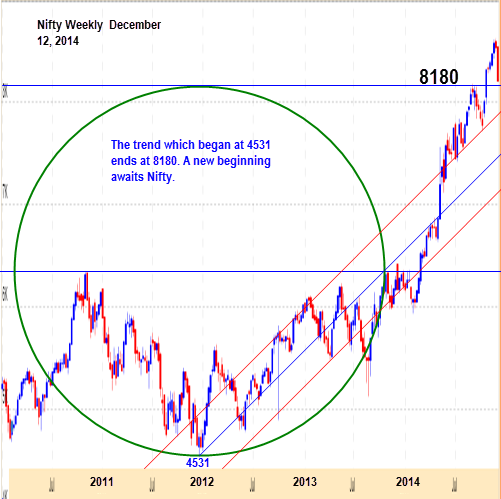 Let us look at the momentum charts to understand better....Most of the understandings from here on apply for traders more rather than investors...The chart is self explanatory... 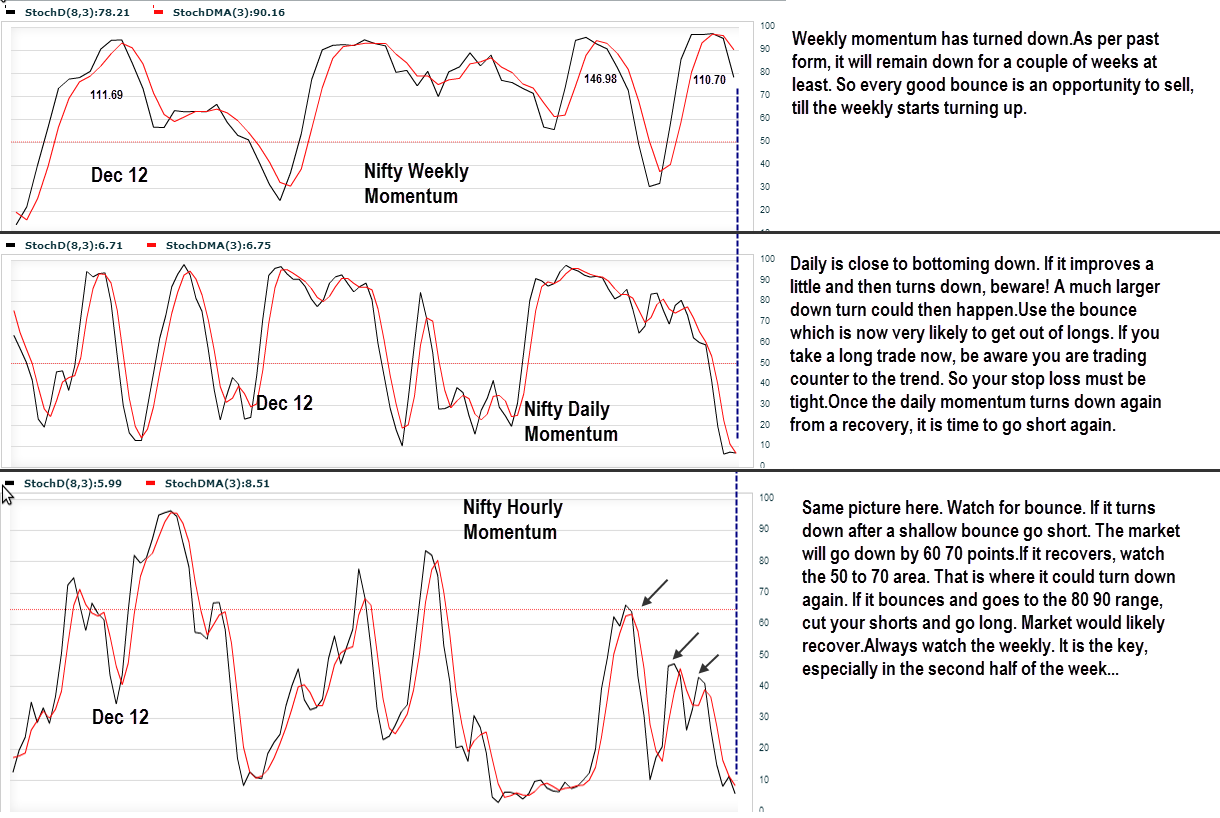 So immediately we may see some bounce in the Nifty...in the smaller time frames, but that may only flatter to deceive.
Let us go down even further,,,to daily cycles:Our observation of the previous week are reproduced, along with new observations in black. 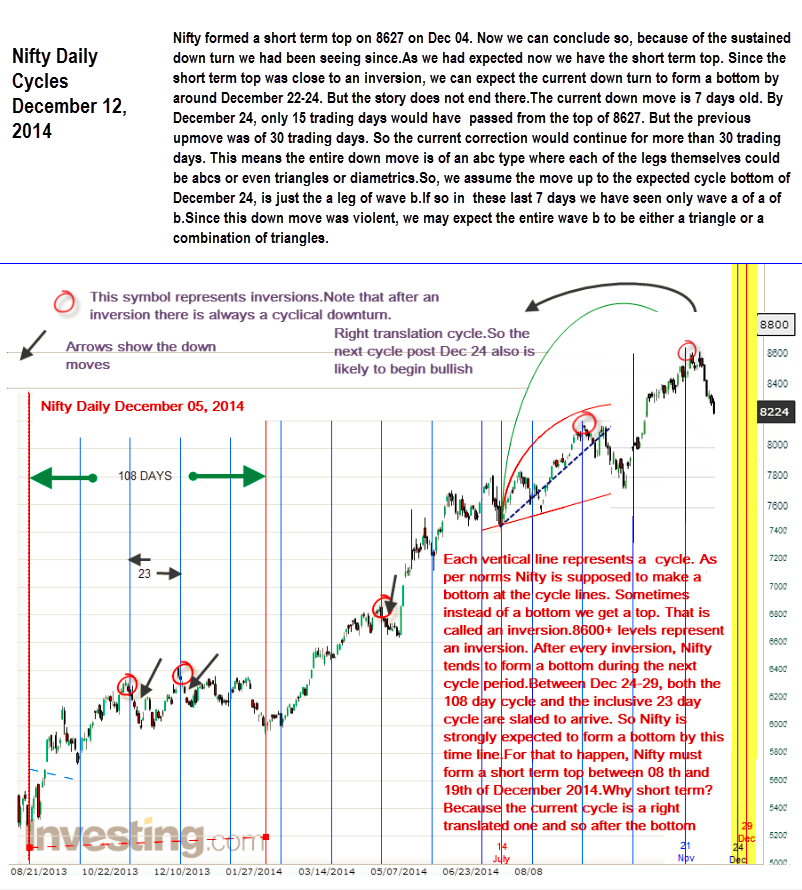 Current 108 day cycle is a right translated cycle. Both the 108 day and the 23 day cycles are slated to bottom out in the December 24- 29 day period. This could also be a little advanced to December 19 or 22.So an important bottom should happen in the period mentioned above.The next cycle should start violently bullish, but may form a top closer to this bottom and start declining. In other words, the next cycle could be left translated.
What does this mean?
Whatever bounce which happens is an opportunity to go short..When the cycle bottoms out, in December 22-29 period, then we will get an opportunity to go long as well..

Going one more degree lower, to 30 min, we see that 8175-80 level seems to be an important support level from angles points also. 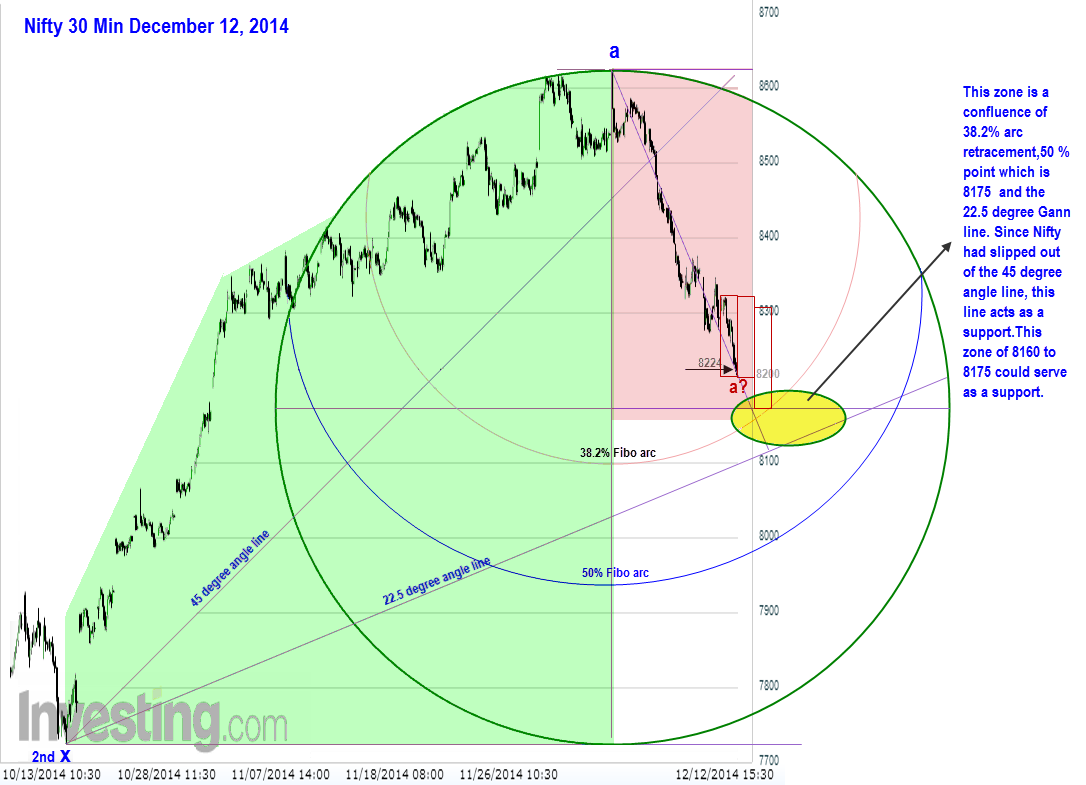 To conclude;Longer time frames are indicating caution. Weakness has started to creep into the market.Lower time frames are indicating some bounce is on the way.Use them by all means, for trading.but with tight stop losses.Right now the path of least resistance for the market, is down.Always keep this in mind when taking positions.
Astro discussions shall follow in another post.

Have a happy, yet safe trading!
Of course, all of this is my view point. I shall not be responsible for any trades which anyone does based on these information.Please contact your investment advisor before committing to the market.All information in this blog is for educative purposes only.
Posted by Tekkiesuresh at 4:47:00 PM