We had been expecting reversals for the past two weeks and Nifty did so a trifle rapidly in the past week.Nifty came down from 7841 on July 25 to 7603, on August 01, in just 5 trading sessions.Whether this is a correction or a trend reversal, only time will tell.I shall continue with my views and let you all decide. One thing is now very clear. When astro aspects bunch up and when there is also a technical confirmation, then surely there is an impact in the markets.
A look at the monthly cycles... 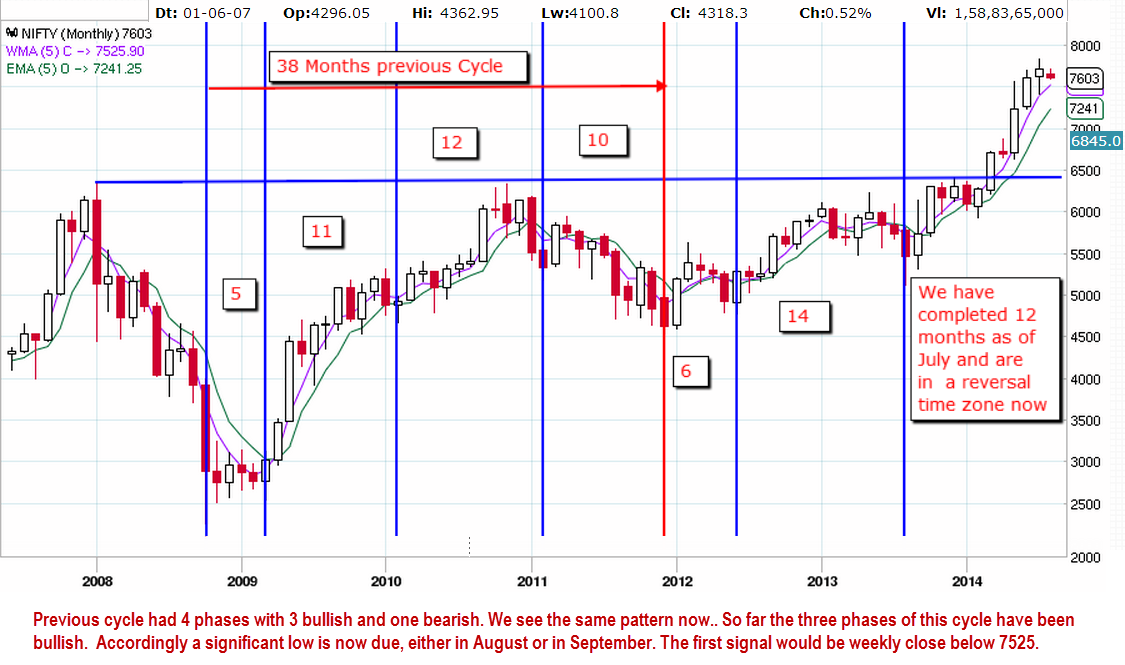 This could coincide with the completion of diametric wave F and the beginning of wave G downwards.As usual it did not take much to dampen the sentiments of markets all over the globe.
Here are the weekly cycles chart...

In the monthly cycles chart,the last candle was not considered, because it pertained to August which had just begun.So in the coming four weeks, if the Weekly manages to close above 7422, the bullish trend will be intact. Any closing above 7800 will be strongly bullish.However, looking at the weekly technicals, it looks like some more downside may be achieved on a weekly scale, before we resume the uptrend.Weekly cycles also have reached their 13 week cycle which indicates some reversal.
Here are the Stochastics... 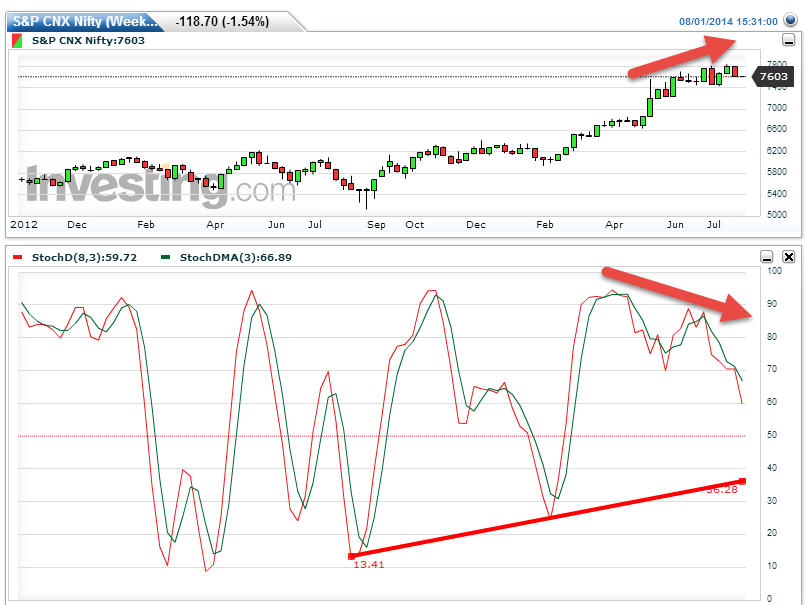 After several weeks of bearish divergence, Nifty Stochastics has turned down below the 70 mark.Critical support point shall be the 36.28 mark.These cycles an indicators are cautioning us not be overly bullish at this point in time... 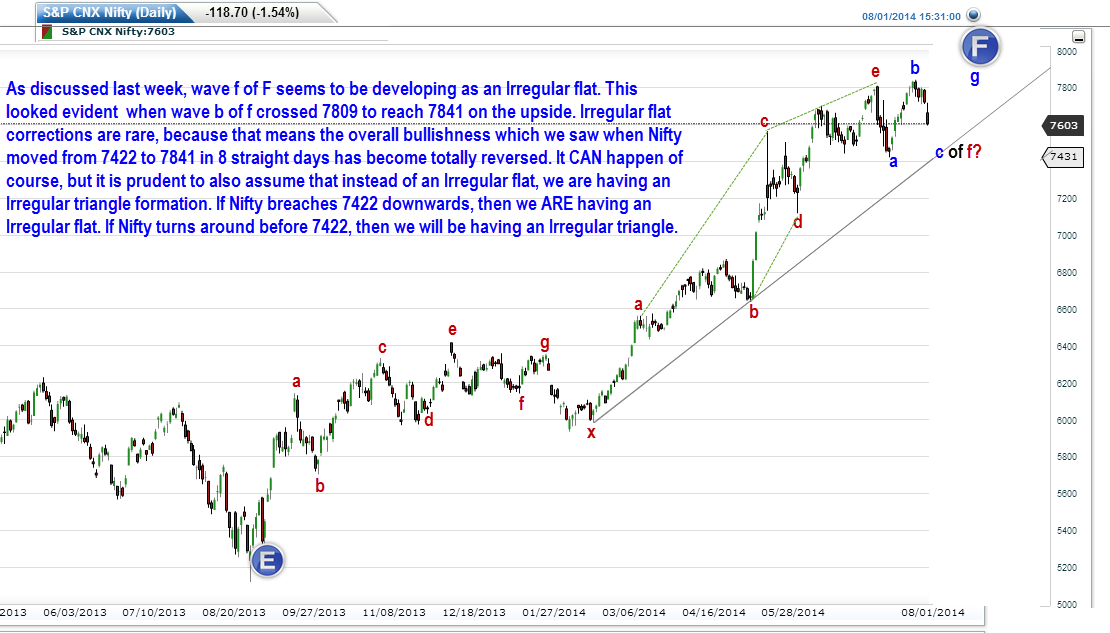 Neowave counts are shown on the daily chart.We appear to be in the c leg of wave f of larger Diametric wave, F.Even though irregular corrections are comparatively rare,we will not discount the possibility, especially if Nifty weakens strongly this week also.If wave c ends above 5422, then it is an irregular triangle with the d wave moving upwards and a final smaller e moving downwards.Post the triangle then we could expect a 300 to 400 point rise.
Another more bearish possibility is, since wave b was larger than wave a ( wave a was 387 points, as whereas wave b  was 417 points), wave c could be equal to wave a- which means wave c could go down to 7454.So where wave c ends is an important point for post pattern analysis of Nifty movement. 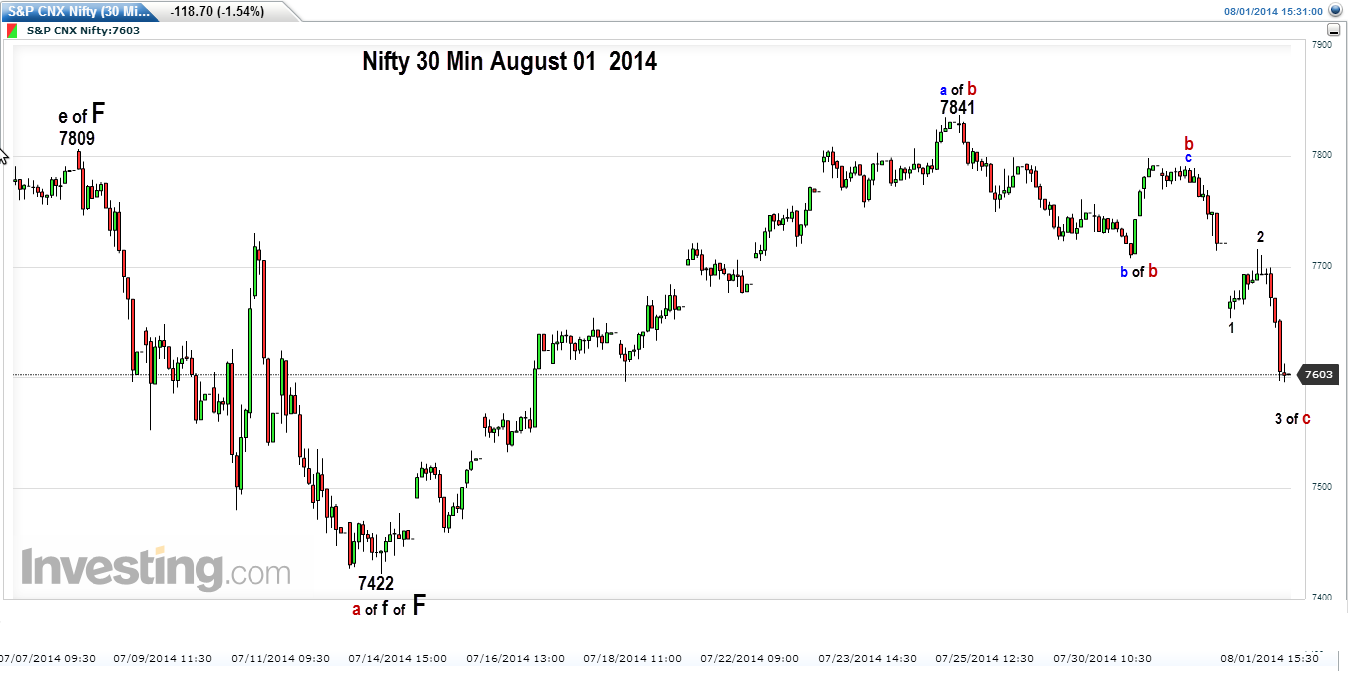 30 minute chart makes things a little more clearer.Wave c of f had turned down from 7789 levels.Currently it is forming wave 3 of c.This means there is some more space to go down.

Enlarged chart brings out the point that wave c is still not complete.Maybe it will go beyond wave a in vertical length on Monday before a bounce forming wave 4. Technically wave 4 should not cross the 0-2 trendline drawn above. Depending on the angle of recovery, that means Nifty should not bounce beyond 7660 for this impulse to be valid. So the prudent trade would be to go short with a stop loss of 7660, if Nifty bounces on Monday.Of course if the bounce is more than 7660, then the Irregular flat gets converted into Irregular triangle or Irregular c wave failure patterns, both of which are bullish.Then we buy with a stoploss of 7660.

To sum up, our trade decisions depend on what Nifty would do with the current c wave.
That brings us to Astrology.
Can the planets give us some indications then? 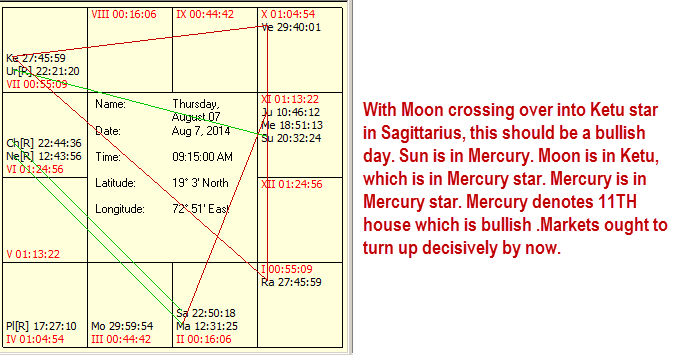 Net, net, movement of c wave decides things for the time being. Astro indicates that the market could continue its negative ways till a turn around happens by August 06 or 07.
Now let us wait and watch! If things happen the way we want, well and good. If not we get powerful lessons to  be learnt. Both are fine anyway.
Of course the regular disclaimers hold good. Trade with caution. No anticipation.Protect your capital always.
Have a great week.