Nifty had ended the previous week on October 01, at 11416 with a bull candle.

This was our expectation. "Up move had achieved the 61.8% retracement and also has crossed above the 50 SMA. Both these are tell tale signs of market reaching mature levels.

Nifty opened at 11487 on October 05 and proceeded to continuously go higher and close the week on October 09 at 11914, after hitting an intraday high of 11938. In the process, Nifty had comfortably taken out the the previous cycle highs of 11618 and 11794.With this Nifty had overcome the bearishness seen in the last two sub cycles. However, Nifty has moved up straight for the last ten days  as seen in the chart above and a sub cycle top may form this week. In other words, after some more up move this week, a pull back looks likely.

It is now a buy on dips kind of market.

In this long term chart, we can see that 12103 to 12433 is the reversal zone for Nifty. This means the zone is less than 200 points away. So the correction may happen after Nifty reaches this range. Anyhow, it is prudent to be cautious with long positions. And also it is not yet time to open shorts.

Current sub cycle is the first in the new series of cycles. It is yet to take out the previous top of 25232. Already ten days of up move has been completed in the current sub cycle. Candles have closed just above the 200 SMA. Unless the candles open with a strong gap, this 200 SMA is likely to provide some resistance. The other Moving Averages are at a  distance. So be cautious with longs. 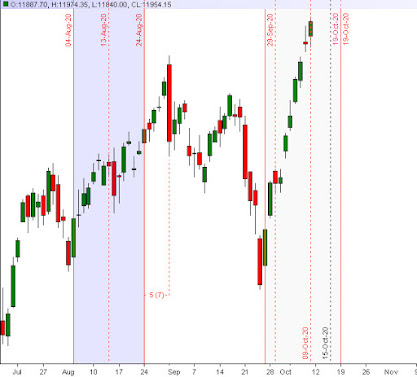 Between October 14th to 19th Sun also will square these three giants.. Jupiter , Pluto and Saturn.

Things could turn choppy and topsy turvy in the next two weeks.