Last week we had expected Nifty to make a final pull back target between 11410 and 11460.Nifty closed the truncated previous week at 11416.

Let us look a little closer...

Nifty formed a significant cycle low on September 24. So we shift the end of previous cycle to September 24. It was also 23.6% Fibo retracement of the move  from March 23 bottom to August 31 top.

Previous bearish sub cycle between September 09 and September 24 had moved up for five days before turning down.

This sub cycle also had moved up for five days so far. So we can conclude that this uptrend is nearing maturity.

The current up-move did not terminate below 11173.Instead it strongly moved up to 11416. So the next down move when it come may not be very destructive but may consume more time..

Up move had achieved the 61.8% retracement and also has crossed above the 50 SMA. Both these are tell tale signs of market reaching mature levels.

We look for a reversal between the current closing of 11416 and 11557 ( 76.4% levels ), This view is Market is supreme and so will wait for market move of confirmation or non confirmation.

Price control area as shown by black arrows had been a support area in 2016 to 2019 and now  acting as a resistance. 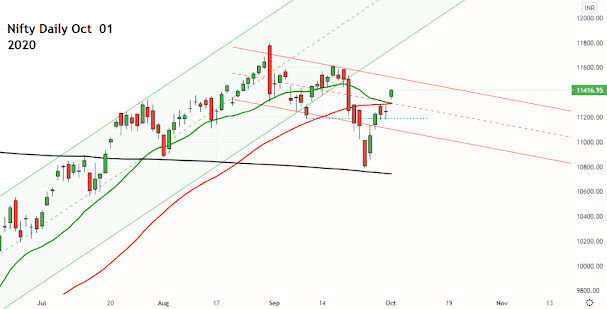 Price has moved below the uptrending value area and is now forming a new price control.

Bank Nifty has strongly moved up, beyond previous cycle bottom and is poised to move up to 22700.
Price has reached the 20  & 50 SMA and all of them are below 200 SMA. We continue to be bearish on this index.

Bank Nifty has slipped out of the value zone considerably and is in the process of forming a new value area zone.

Our Astro views of last week hold good this week as well.