This post is not for traders..It is for Investors..
See this chart.. 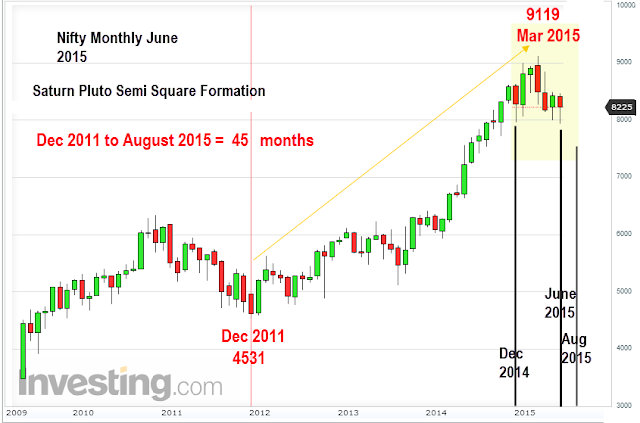 On December 20, 2011, Nifty formed an important low at 4531.By August 2015, we would have completed 45 months of uptrend.This is a 4 year cycle in operation.
We had seen that Nifty follows 8 year cycles, quite diligently, 1992,2000,2008 etc.,
4 year cycles are naturally present when 8 year cycles operate.
Cycles are not precise, because they get distorted by bigger cycles. Such a distortion has produced a cycle low of Dec 2011.
Often we find that Saturn and Pluto form waning semi squares when such 4 year cycles are formed. There are other planetary combos of course, for long term cycles, but we are right now interested only in Pluto and Saturn forming 45 degree semi squares.
Since both Pluto and Saturn have the habit of becoming retrograde, sometimes this Semi square formation happens as a triple combination..that is the formation happens three times in a row.
For instance, we see that we had Saturn Pluto SS on November 29, 2014, June 20, 2015 and we shall have one more in August 2015.
If we measure this period from November 29 2014 to August 13, 2015, we find that it has taken 9 months. Mid point period is 4.5 months and that coincides with the decisive secondary top of 8845,
on April 15, 2015.
This is perfectly in expectation of a crest formation as part of 4 year cycle culmination .
Now, our interest is what happens hereafter?
Let us dip into history and look at two charts from long ago... 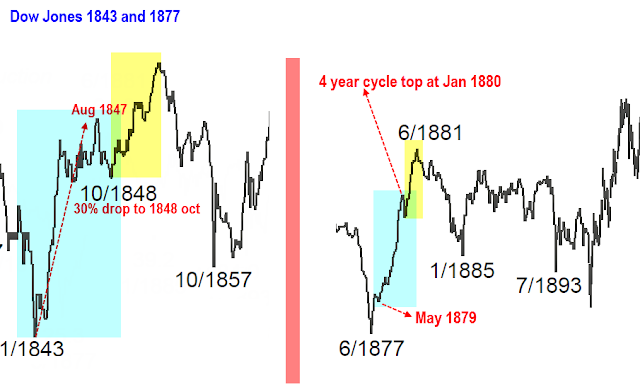 Chart on the left is Dow Jones from 1843..
We see that 4 year cycle, influenced by Pluto Saturn semi square, formed a top in August 1847 and then slipped back 30 % after which it began a bull run to a bigger top.
In the chart on the right,
we see a bull run from June 1877 to a cycle top at Jan 1880.The Dow corrected but once again surpassed the previous top in a fresh bull run.
Extrapolating the understanding, once this ABC corrections are completed, we will get a fantastic opportunity to invest into some good stocks which may give us very good returns.
Since I expect the dollar to appreciate further, have a close watch on good IT Companies.

This week`s trading strategy, effect of other planetary combinations on the markets and other relevant information are given in the subscriber blog.
To subscribe, please send a mail to tekkiesuresh@gmail.com