Greece and the European Union- An astrological view

This is the news which is causing ripples around the world yesterday...


The crisis in Greece now has the full attention of investors around the world -- and they don't like what they see.

European markets were hammered early Monday morning, with both the German DAX and French CAC opening 4.4% lower. Portugal's stock market was down nearly 6%, while Britain's FTSE fared better, shedding only 2%. Those losses were trimmed by late morning.

European bank stocks were particularly hard hit. Spain's Banco Santander (BCDRF) gave up 5.7% in early trading, while French bank Credit Agricole (CRARF) lost 6.7%.
"While Greece is the weakest member of the euro and might not have the largest economy by any means, the global implications to Greece failing to repay its debts remain largely unknown and this is why worldwide indices will continue facing downside pressures," noted FXTM chief market analyst Jameel Ahmad.
Related: Even U.S. stocks drop on Greece default fears
Greek shares and bonds were not trading Monday because markets were shuttered after officials said Greek banks would be closed until July 6.
Asian markets finished lower on the day, led by Japan's benchmark Nikkei index, which declined by 2.9%. Australia's ASX All Ordinaries was down 2.2%, while Seoul's KOSPI Composite lost 1.4%.
The euro tumbled against other major currencies, losing 1.6% against the Japanese yen and 0.8% against the U.S. dollar.
Government bond yields rose in Italy, Spain and Portugal but the move was modest, and all three countries are still able to borrow more cheaply than a year ago.
In the U.S., stock futures were pointing to a sharply lower open on Monday and that's exactly what happened. The Dow shed over 130 points (0.75%), and the Nasdaq close to 1% in early trading.
The trigger for the rapid escalation in the crisis was the Greek government's decision late Friday to pull its negotiators out of bailout talks. Prime Minister Alexis Tsipras slammed a draft proposal from Europe and the International Monetary Fund, and then said he would put it to the Greek people in a referendum on July 5.
Related: Greece shuts banks in bid to prevent collapse
European leaders are now facing one of the worst moments in the history of the euro. President Obama called German Chancellor Angela Merkel on Sunday, and the two agreed to take all steps to try to resolve the crisis.
Banks in Greece will not open on Monday, and account holders will face tough limits on what they can withdraw from ATMs.
The curbs on banking imposed by Greece on Sunday are known as capital controls, which are used only at times of extreme stress in a banking system.
Greece faces a critical deadline on Tuesday, when it must make a loan payment to the IMF. The country looks almost certain to default on that payment."

How does the scenario look from an Astro perspective?
Let us look at two charts..
1. The day Greece joined the European Community
2. The day European Union was formally brought into being 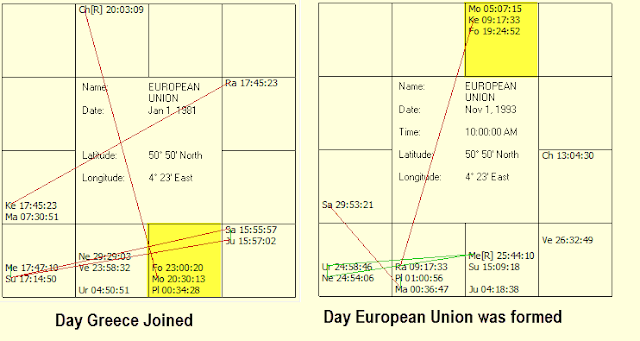 Since exact times were not known, I have taken recourse to Moon charts. That is where the Moon position is considered as the Ascendant.
From the first chart we see that Jupiter and Saturn were conjunct in the 12th house, in Virgo, with Pluto just at the entrance of Libra.Both Saturn and Jupiter were closely trine with Ketu and sextile with Rahu. In other words energies of powerful slow moving celestial bodies, were intertwined.
Jupiter, the lord  of contracts was already weak because he held the 6th house responsibility as well. Further, such a Jupiter, was powerfully influenced by Saturn, both in the 12th.So Jupiter loses strength and becomes malefic as well.
Mars, lord of 7th and 2nd, is happy in the  4th, because Capricorn is his exalted house.He is also the second house lord. So lord of 2,7 and 11 houses is strongly placed. The marriage had to happen.Since Saturn owned the 4th house, the marriage had gone through prolonged courtship before conclusion.
Apart from  Jupiter, another negative was the square aspect between the 11th house lord Sun and Saturn. Venus the 8th lord also spoilt the signification of the 2nd house by being in it.
In a nutshell, there were inherent issues with the marriage. Any horoscope where Jupiter goes into the 12th that too with the 5th lord Saturn is a major cause for concern.

Let us look at the second chart, that of the day, European Union was formed..
Immediately we notice the Nodes afflicting the lagna and the seventh houses axes.This is Kala Sarpa yoga.This is worse,because both Rahu and Ketu are debilitated!
What effects could that bring? Huge debt related issues because Mars lord of the 12th is in close proximity with Pluto, both strong.And both afflicted by a debilitated Rahu-Ketu axis.
Jupiter, the 8th lord is in Mars star, where Mars is the 7th and 12th lord and Mars, the 12th lord is in 8th star lord, Jupiter`s star. This is not a very happy parivarthana.
However Jupiter in the 6th and Saturn in the 9th ( here 9th lord is in his own house) are redeeming features and keep the ball rolling.
Another rare aspect is the conjunction of two very long term planets, Uranus and Neptune. This is happening in the 8th house.Typically these planets connect to economic cycles which are very long, such as 18/27/36 year cycles.By 2020, we will be in the 27th year after European Union was formed.  So matters of great import shall happen, when these two slow moving planets are translated by another slow moving formation, such as Ketu-Rahu axis. Such an event will happen in 2019/2020. 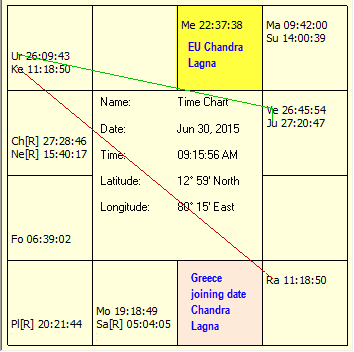 I have highlighted  both chandra lagnas in this present day time chart.
Looking from Tula chandra lagna ( pertaining to Greece joining EU), we find that the 6th house of debts is heavily afflicted by Rahu and Ketu and has also got Uranus, ( the revolutionary and master for sudden events). Venus is the 8th lord and he is conjunct with Jupiter, the third and sixth lord, in the 10th, in Mercury star ( Mercury is the 9th and 12th lord, presently in the 8th).Moreover, both Jupiter and Venus are triggered off by Uranus trine.
So no wonder, sudden debt related events are getting triggered off isn`t it?
Looking from Vrishabha Lagna, ( pertaining to EU formation date), Venus is the 6th lord and Jupiter is the 8th lord. Both are meeting together in the 3rd house, the house of contracts and agreements.
And getting triggered off by Uranus from the 11th. So amazingly, strife because of debts and contract break downs are indicated.
Since both Mercury and Venus are fast moving planets, the current issue may not precipitate Greece leaving the EU.This is likely to be a temporary problem only.
However, 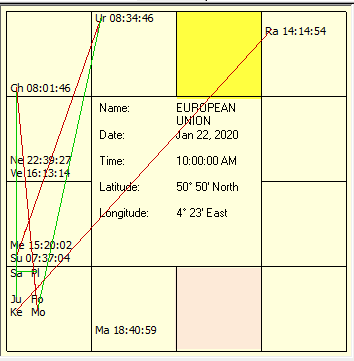 Look at this chart of 2020.EU`s 8th house is Sagittarius.
Saturn conjunct Pluto there.
Jupiter also in Sagittarius.
Rahu Ketu axis also afflicts the 8th house.
Uranus is in the 12th.Such a Uranus connects with Mercury, the lord of 5th house.
It looks highly likely that the EU itself may cease to exist.
Since Sagittarius is the 3rd house in Greece joining date chart. all contracts, agreements may become null and void then.
The whole world is about a witness turmoils in 2019/ 2020.
Additionally Ketu will connect with Neptune first and then with Uranus between August 2019 to March 2020.
And it would bring home the 27 year cycle!

Such momentous events will offer tremendous trading and wealth creation opportunities. To know how to benefit. you can subscribe to the paid section of this blog. Just send a mail to tekkiesuresh@gmail.com, if you are interested.

Despite sharp fall yesterday in NIFTY the wave counts seems to be unchanged. In my opinion we should see higher levels in the coming 2 weeks. You will find my analysis and charts on my Nifty blog.