For the long term we see that the 13 month cycle is quite important for Nifty and so the 13th month will be September 2014. 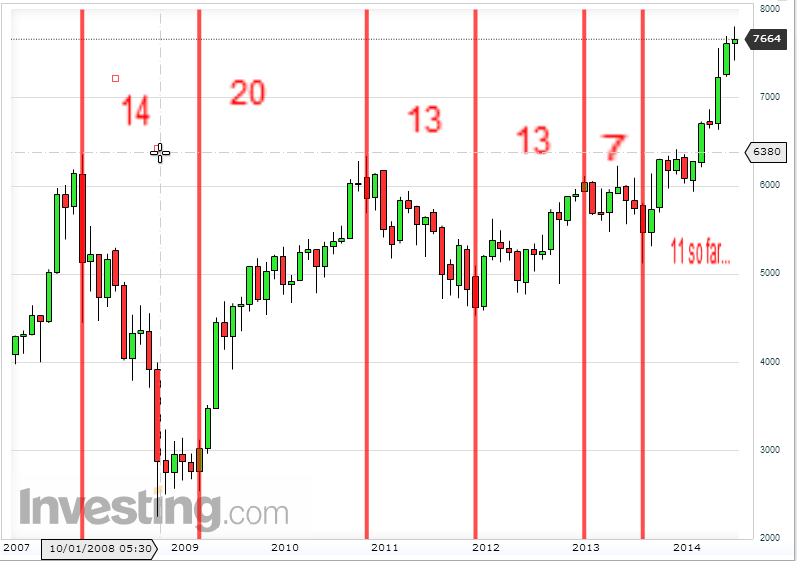 Since time cycles expand and contract, we give an orb of +_2 months. We are approaching a crest of significant proportions in the next two months.
Of course, we continue to believe that the very long term trend is quite bullish.
However the weekly picture looks a little wobbly. It appears that Nifty wants to relieve some of its overbought pressure 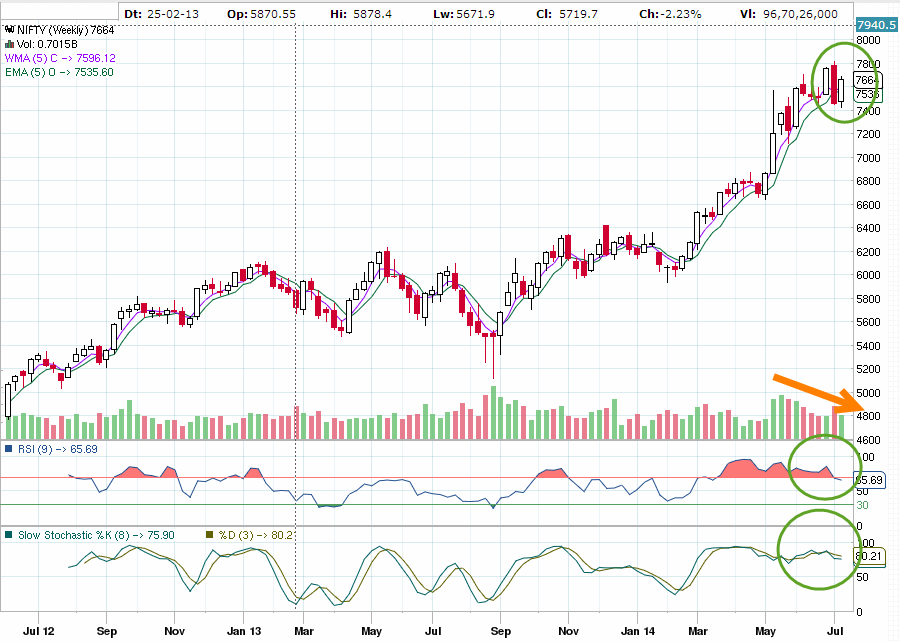 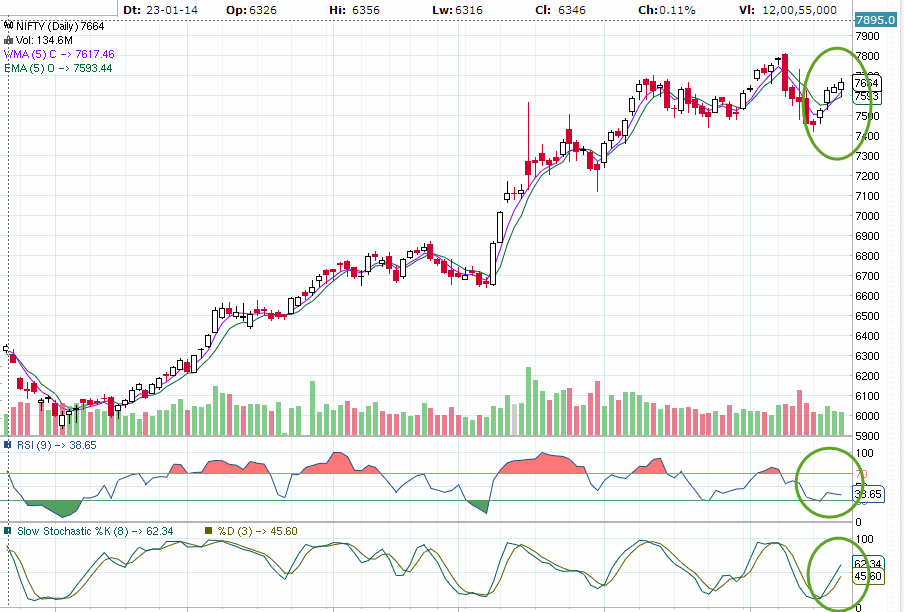 Let us look at the wave counts…. 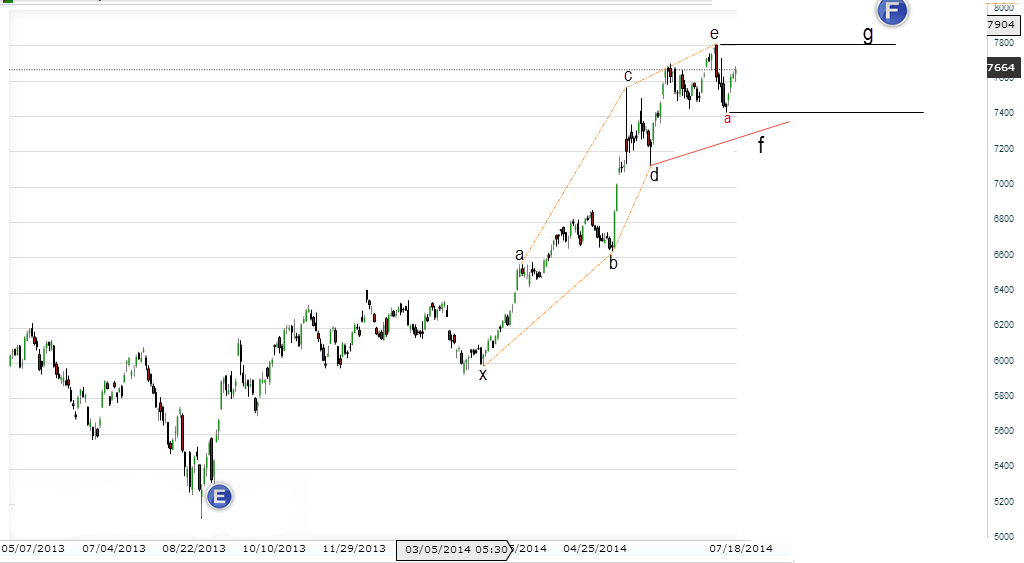 Nifty had technically surpassed and closed beyond 7660, at 7664.This marks the 61.8% retracement for the fall from 7809 to 7422.So the odds that Nifty is forming a flat from the top of 7809 is higher now. Price, movements on Monday should confirm the picture. If so, f wave of the diametric is just on. It had completed one leg “a” at 7422 and currently it is “b”. This b wave could retrace anywhere between 61.8 to 80% where it will be a weak b wave. If it retrace 101 to 123.6% it will be a normal b wave and anything beyond that it will be strong b wave. We expect b wave to behave normally and later on go back to the base or beyond, as wave c of f, from where wave” a started. If so, then wave g of the complex corrective will unfold later on as an upmove.
So we expect the bull move to continue this week with volatility. July 24th and thereafter have to be watched carefully.
A look at the short term cycles..
As per this chart, we see that Nifty is close to a reversal zone.. 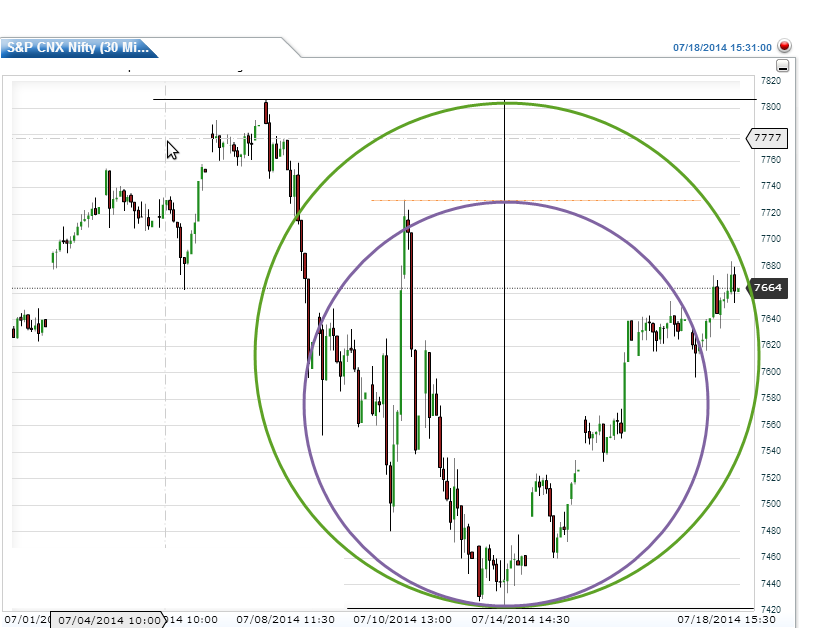 This looks like the current uptrend could terminate by July 24 or 25, 2014.Then b would have been completed and the downward c should begin.


The next option is that the current upward wave movement be construed as wave g of the diametric.. In such a scenario, wave g has opened upwards and may continue for 3 or 4 days. But this count now looks improbable now.Closer to the New Moon, looks like an opportunity to create shorts, with stop losses.Last but not the least, allow price to move first in the direction of our expectation, before any trade steps are initiated.
Trade carefully!
Posted by Tekkiesuresh at 2:40:00 AM